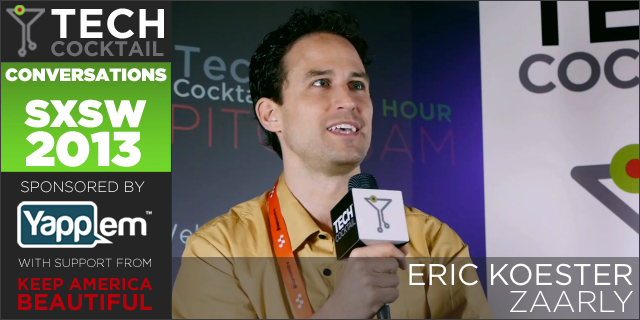 In 2011, Zaarly probably set a record by raising $1 million in funding just three weeks after they started. What began as an idea at Startup Weekend LA soon had the backing of investors like Paul Bucheit, Naval Ravikant, and Ashton Kutcher.

Zaarly went on to raise $14 million more later that year for a “reverse marketplace”: people would post requests for things they needed, like picking up Chinese food or walking a dog, and others would respond.

But last September, Zaarly switched its focus to “storefronts,” web pages where individuals or small businesses could advertise their services. The goal is to put a human face on local businesses, compared to huge, faceless chain stores – to replicate the feel of a farmer’s market or indie bookstore, but online.

Cofounder and COO Eric Koester made an appearance at our SXSW Startup Celebration sponsored by CEA and .CO. Among other things, Koester talks about the activity he’s seen in the Midwest both from startups at NEXT and small businesses on Zaarly. Here’s the video.