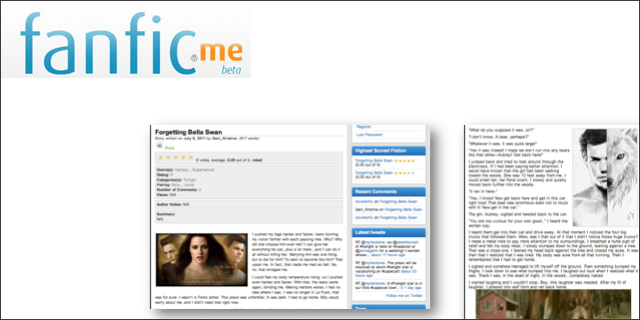 Diehard fans often put up with clunky technology just to pursue their passion. But Fanfic.me, launching later this week, hopes to bring fanfiction addicts into the twenty-first century.

“We’re making fanfiction as easy – and feature rich – as blogging,” explains Jacquelyn Abromitis, who owns an online education company and can’t pass up a good Glee or Good Wife episode.

Fanfic.me’s WordPress plugin will bring fans together around TV shows, movies, and books. They can write and read fanfiction, embed pictures and videos, and share posts on their social networks.

Abromitis sees fanfiction writers as an underserved market, stuck in the era of text-only – mostly on Fanfiction.net, which has millions of authors and hundreds of millions of monthly page views. Ficly, a much sleeker site born out of an AOL project, also focuses on text but engages users with a 1,024-character limit so others can pick up where you left off. Fanfic.me is positioning itself as a more general alternative: fanfiction can be an individual or group project, text or multimedia.

Abromitis has grand visions for a site yet to go live, but she has an impressive team to back it up: COO Kathleen Ulisse, a former senior project executive at IBM; CTO Chad Horton, who has experience at a Fortune 500 company; and adviser Alice O’Brien, who has designed web and mobile sites for a large Canadian bank.

And the software underlying Fanfic.me has already been tested: eight years ago, an earlier version was born as L-word.com. Abromitis heard about Showtime releasing The L Word and knew it would be a blockbuster, so she created the site – where, originally, she posted content that fans emailed to her. As L-word.com grew to 8 million monthly page views, she began allowing users to upload their own posts.

“Writers and readers kept asking for more,” recalls Abromitis, who became inundated with user-generated content. And even after eight years in the making, Fanfic.me will be a “work in progress,” as a new crowd tries out the platform. Since they are writers, they’ll surely have a lot to say.

To hear more from Fanfic.me, or chat with Abromitis about Glee, join us at the Tech Cocktail Boston mixer this Thursday.