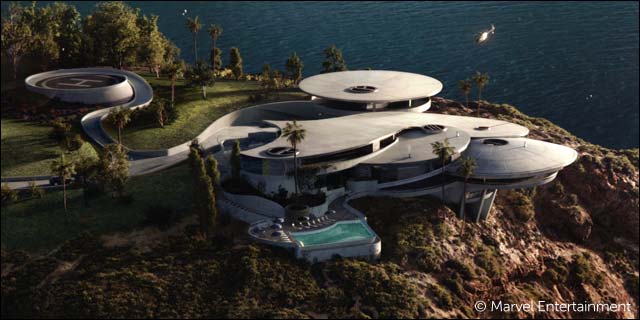 The days of having to turn off your own lights and adjust your own thermostat are gone. With recent advances in wireless communication technology, home automation companies have made it possible for the modern homeowner to live an entirely post-modern lifestyle, complete with remote-controlled electric locks, machine-learning climate control, and self-operating appliances (because sometimes you’d rather just have dinner cook itself, you know?). However, even the most advanced smart homes in the world tend to look fairly pedestrian when compared to the awesome technology exhibited in the world of fiction. Seriously, Bill Gates’s home may have heated driveways and occupant-specific room settings, but where are the chairs that fold into briefcases or the moving walkways? So, just for kicks, let’s take a look at seven of the coolest smart homes that never were.

Set in the year 2063, the Jetsons's home has become something of a poster child for home automation, and in fact, many of the advances that were conceptualized on the show have actually become a reality. Flat screen televisions? Check. Cordless robotic vacuum cleaners? Check. Video conferencing? Check. In fact, you’d be hard pressed to find an automated system in the Jetson’s home that isn’t currently available – as long as you overlook the sassy android maid.

When Marty McFly visits the year 2015 in Back to the Future Part 2, his girlfriend Jennifer goes along for the ride. After getting separated from Marty and Doc, she ends up at the home of her future self—and what a home it is. Despite having large televisions, voice-operated door locks, lights, and food receptacles, and even (snicker) fax machines in every room, the viewer gets the impression that this home isn’t exactly “state of the art.” Still, replacing all windows with visual monitors that broadcast beautiful views 24 hours a day might be kind of nice, as long as you didn’t have to deal with commercials. Many viewers had hoped some of the movie’s technology might actually come to life by 2015, but it looks like the movie fell short on many of its predictions.

The home in which baker, window washer, animal control agent, and all-around genius inventor Wallace and his long-suffering dog Gromit live may not feel “high-tech,” but even if it runs on pulleys and sprockets, it still has a few features that we’d love to come home to. How about a bed that not only dumps you out of the covers when it’s time to get up, but also sets in motion a chain of automated events that gets you dressed and even makes you breakfast? Of course, most of it requires the use of a dog that is willing to pull levers and push buttons at the right moment, so it may not be for everyone.

With access available only through a secret entrance behind a bookshelf in the bedroom of a boy-genius, the titular laboratory is spacious enough to house multiple workstations, computers, and building-sized robots. At the same time, Dexter’s lab makes sure not to skimp on the finer details. In fact, rather than run through all of the automated systems that were featured throughout the show’s six-year run, it might save time just to mention the systems that it didn’t have. But it featured just about everything a child’s mind could imagine when it comes to a tech-savvy home.

If you’ve seen the Iron Man movies (and considering that the franchise has made $2 billion worldwide, statistically speaking, you and everyone you’ve ever met have seen the Iron Man movies), then you no doubt took notice of the impressive Stark mansion. This place is a home automation paradise. Home automation companies like Vivint, Nest, and others have pushed to create technology like we see in Stark’s home, including programmable thermostats and smartphone-controlled lighting. But Stark’s home is so much more.

In addition to having all of the smart home basics (automated lighting and temperature control, voice control, robotic research assistants, etc.) the entire system is all tied wirelessly back into Tony Stark’s artificially intelligent supercomputer, JARVIS. JARVIS is basically a built-in hyper-intelligent butler/sidekick that can change the channel on a television set at the same moment it’s assisting in the discovery of a new element. Oh, and given the fact that Iron Man can upload JARVIS into his armor and take him along on adventures, this is the only home automation system that doesn’t actually need a home to function.

6. The Fortress of Solitude

To paraphrase the old saying, anything Iron Man can do, Superman can do better. Superman’s home away from home isn’t even built out of earth materials, relying instead on Kryptonian crystal technology. Inside, it contains a zoo filled with alien creatures, a miniaturized Kryptonian city complete with miniaturized inhabitants, an extra dimensional gateway, and hundreds of robot servants. Yes, the Fortress of Solitude is so cool that the home-automated robot servants are actually the most mundane part.

David Glenn is a technology writer who has been featured on sites like Dwell.com, Business2Community.com and MotherEarthNews.com. He draws from 30 years of experience as a business owner.