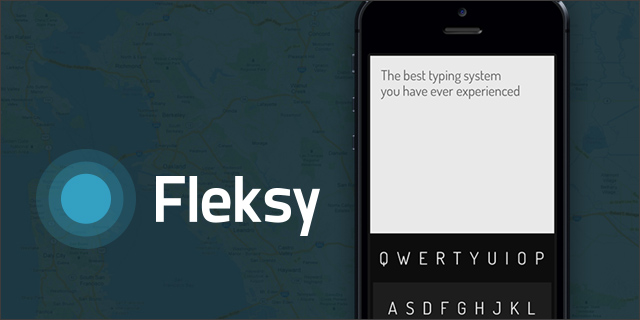 You might recognize Fleksy from their recent victory at Tech Cocktail’s SXSW mixer where they took home best in show. Add that victory to their already large cache of awards, and you see why Kostas Eleftheriou and Ioannis Verdelis’ dream to be free of poorly planned, first generation touch pad tech is one to get behind. These two are the brains behind Fleksy, a new virtual keyboard with bewilderingly accurate corrections. And as the video on their website so nicely points out, “Even if you miss every single letter, it still works.”

Fundamentally, Eleftheriou and Verdelis believe that the QWERTY model of typing is flawed. They note “Most first generation typing engines require precise input from the user as a core element of the typing experience.” Fleksy offers a new angle because it removes the need for pinpoint accuracy, which is, paradoxically, a trait rendered nearly impossible due to small smartphone keyboards. “Fleksy analyzes a wealth of user typing data, and after a little bit of use, can detect the correct word to input even when someone misses every single key on the keyboard. In fact, the system is powerful enough to be useful even when the user is not typing within the keyboard area at all” boasts Eleftheriou and Verdelis.

Eleftheriou and Verdelis have taken their precise algorithms and brilliant system beyond a simple solution to typing, though. It is their mission to make the smartphone more applicable to the world of productivity. The pair started their work by introducing Fleksy to blind people as a way to improve their lives and productivity. Eleftheriou notes, “Fleksy helps those [blind] people type three to four, sometimes five, times faster.” He continues, “Our software keyboard is so powerful that you can type on a touch-screen without even looking at the screen.” These results show just how far Fleksy really can take an individual. “Frustrations with typing on a touch-screen have wide implications to the application of mobile computing,” they explain. “It prevents such devices from being used for content creation, and causes hesitation in their adoption in the enterprise sector.” That is, the smartphone with Fleksy becomes easier to work from and highlights one huge benefit a smartphone can bring to the table: laptop and stock keyboard replacement.

Not only does Fleksy sound great on paper, but it lives up to the hype; the competition does not stand a chance. Swype, while impressive, has an extremely steep learning curve, which discourages a lot of users from ever taking on the challenge. Swiftkey has predictive technology, which markets show to be less desired than a natural typing system. True, Fleksy does have a few ties to these methods, but as Eleftheriou and Verdelis explain, “We have tried hard to maintain the familiar QWERTY layout and tap typing, which is what people are used to, and we use predictive technology to make typing easier in the background.” They have taken their available tools and re-invented tap typing. Their next step is to remove the physical typing space altogether. Imagine a world where one can type in the air.