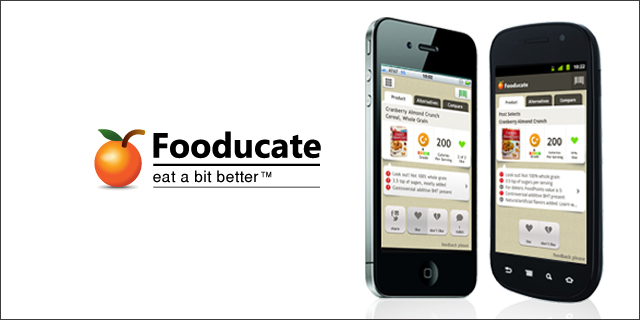 Fooducate is a free iOS and Android app that lets shoppers scan food items and view a letter grade and explanation, with flags like excess sugar, trans fats, additives, and confusing serving sizes. Fooducate also suggests healthier options, like Multigrain Cheerios instead of Honey Nut Cheerios, or all-natural peanut butter rather than regular peanut butter, which contains added sugar and oil. These suggestions also take into account what foods other users “like.”

Launched in January, Fooducate now catalogs over 200,000 products, adding more as users submit photos of food packaging and nutrition information. The promise of healthier food has led to more than 1 million downloads.

Fooducate’s ratings were developed by scientists and dieticians using the latest research, says founder Hemi Weingarten, a father of 3 who sold his first startup to SanDisk in 2005. Recommendations generally follow American Dietetic Association and FDA criteria, encouraging nutrients like fiber and discouraging ones like saturated fat, sodium, and sugar.

Fooducate is conservative.  For example, they flag an artificial red dye that the FDA approves but which has raised concerns in Europe. But the app won’t work for all diets; I follow one that is low-carb and more tolerant of certain fats, so the ratings would be off.

Though Weingarten acknowledges that shoppers won’t always have time to use Fooducate at the store, he says users can also scan food at home:

We've gotten emails from people who said that after scanning the products in their house, half the food is now in the trash!

But if the 10 million scans are any indication, it seems like health-conscious shoppers have plenty of time for Fooducate.