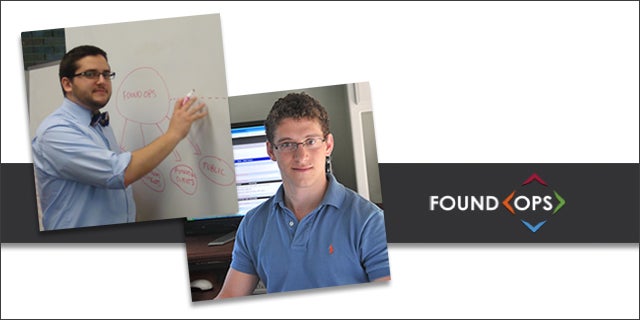 A year and a half ago at Purdue University, Jon Perl and Oren Shatken were student entrepreneurs holed up in a spare bedroom at their fraternity house, pulling all-nighters programming and designing. The space was so small they could turn and bump elbows; and in the early morning, their neighbor’s obnoxious alarm clock would add a jolt to their coffee-fueled brains.

“We would be staying up all night, having caffeine, and this crazy alarm would go off. It was just really terrible working conditions, but I kind of miss them a lot,” says Perl.

Now, their young startup FoundOPS has a real office at the Purdue Research Park, and they just won the Startup Bowl at Indianapolis’s Powder Keg conference. Their software helps field service providers – like electricians, plumbers, or waste management services – to manage customers, assign tasks to employees, automatically plan routes, and keep track of vehicles. They are currently doing private testing with 12 businesses with 25,000 accounts.

Although their offices have gotten an upgrade, the FoundOPS team – now seven – has kept its young, student vibe. The $10 makeshift whiteboards that once graced a frat house wall hang proudly. And they are still learning – everyone reads at least one book or takes one online course per month.

But instead of doing homework, they are building a product. Perl, who started programming at age 15, loves to “craft his own destiny” and decide which problems to tackle next. He always admired Bill Gates and wanted to start a company himself, so he took leave from Purdue to start FoundOPS. Shatken,who works on the design side, finally settled on entrepreneurship after he learned he couldn’t become an inventor. “Somewhere along the way, people told me that wasn’t a real job,” he recalls. Shatken just finished up his studies in August.

They don’t pull all-nighters anymore, and Shatken’s cooking skills have graduated from nachos to fajitas. But the spirit of student entrepreneurs remains.

FoundOPS was a showcased startup at our Tech Cocktail Bloomington mixer.