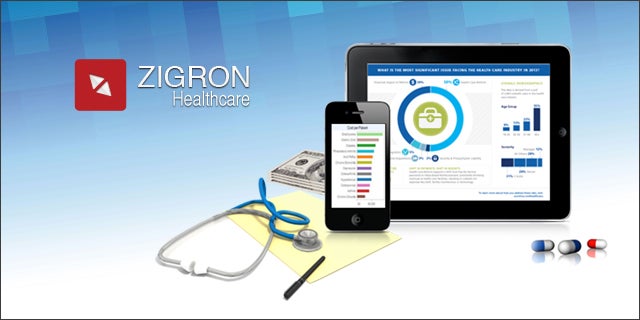 Zigron Healthcare is the product of two great minds meeting. Quasim Mueen and Frank Din designed a focused, scientific approach for fraud prevention in the healthcare industry with their flagship application, FraudCop. The team employs a multitude of software engineers, HIT experts, and visualization and user interface developers to give the industry a solid defense against rampant healthcare fraud.

Din finds himself as Chief Medical Information Officer and the leader of the FraudCop team. He was responsible for the initial development of the algorithms currently used in the background of FraudCop, and his day-to-day consists of innovating development through advanced healthcare data analytic and business intelligence solutions. Din has optimized FraudCop for ultimate ease of use, thus allowing any of their big0name customers to tap into unprecedented analytics for fraud prevention with three simple steps: load claim data, run the program, and assign investigators to recover possible discovered losses.

We had a chance to sit down with Din and get a look into the healthcare industry, fraud, and what makes FraudCop so special.

Tech Cocktail: What is the story behind Zigron Healthcare?

Frank Din: In a previous job, I used a medical informatics approach to design, develop, and manually implement the core fraud detection algorithms to detect Medicaid fraud for a state agency.

I spent 30 hours developing and running the algorithm manually and was able to detect fraud for two doctors in two days time. At that point I knew that my algorithms had to be built into background software to reduce the time to identify likely fraud.

Then I met Mueen, who was operating an IT services company at the time, and he had a particular expertise in data visualization. We started talking about where opportunity was with regard to the healthcare field.

I brought up informatics-guided data analytics and fraud detection, and I wanted to focus on what the data tells me and how I could use it to my advantage. So a new entity, Zigron Healthcare, was formed, and we launched our flagship product FraudCop. What took days can now be accomplished in seconds.

Tech Cocktail: Could you elaborate on FraudCop a little bit?

Din: There is an estimated $75 billion in healthcare fraud every year, and FraudCop makes it easier to recover money, or prevent loss, by simplifying and improving the detection of fraud with my aforementioned algorithms.

FraudCop is faster, easier, simpler, better, cheaper, and more thorough than alternatives, and anybody can acclimate to it quickly without special qualifications like a PhD in analytics.

All of the losses prevented or recovered via FraudCop can be spent on any of the many expensive healthcare costs out there. Overall, the healthcare system benefits monetarily, operationally, and strategically.

Tech Cocktail: Is there a specific demographic you are targeting with FraudCop?

Din: We typically go after any healthcare payer. This includes federal and state government agencies like VHA, DoD, Medicare, Medicaid, and Social Security. We also target all private healthcare insurers like Aetna and Cigna as well as any organization that has a contract to provide fraud detection services on behalf of any of the state or federal agencies.

Our other big market we identify with is integrated delivery networks, which are large provider organizations, where FraudCop is utilized primarily as a fraud risk management tool. Early intervention, thanks to FraudCop, limits the damage to these networks significantly.