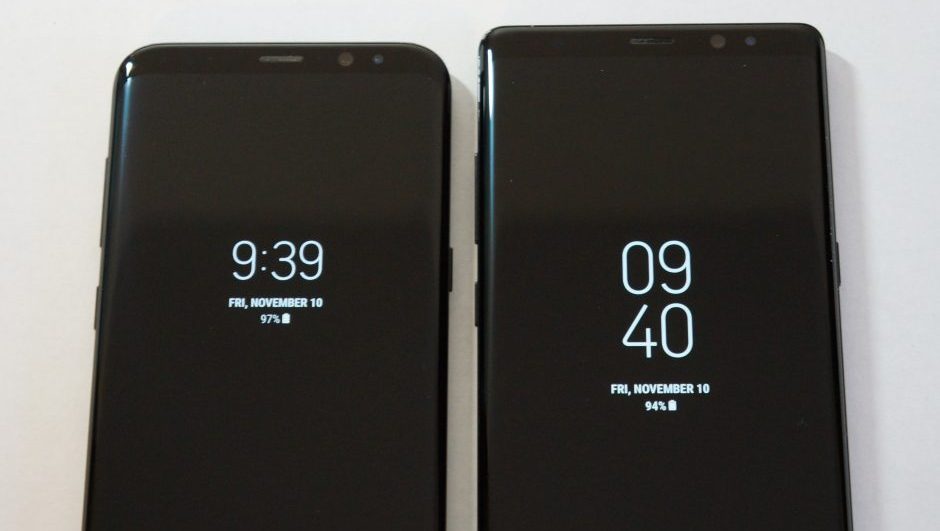 The Galaxy Note 8 is simultaneously the best and most expensive phone I've ever owned. Would I recommend it? Absolutely. The S8+ is top notch as well but doesn't quite keep up with the Note 8, despite the fact that the battery is larger and the screen is almost the same size. I'm going to avoid quoting manufacturer specifications and focus more on the user experience of daily driving both phones for an extended period of time.

The fit and finish is second to none on both of these phones. The glass back, curved glass front and almost no bezels and makes these phones effectually a thin glass slate. It feels like you're holding a very solid display. They're weighty and very solid. I even noticed that when they're out of their cases and lying on the table and you accidentally bump them together, they sound like two billiard balls. On the downside, all of this premium glassy wonder came with an aggressive anxiety regarding dropping them. Both of them are too thin in my opinion. My hand tends to cramp a little if I've been holding the slick, thin body without a case for an extended period of time, such as watching a movie. I would love it if they were thicker and had more battery but will solve two problems at once by using a TPU sleeve: less anxiety about dropping and slightly more comfortable for long sessions of media consumption. The Note 8 and S8+ sizes are extremely similar. The Note is only a few millimeters larger. Why buy this instead of the 6.2-inch Galaxy S8+? The extra tenth of an inch feels insignificant, but the pros on the Note's side aren't screen size or even aesthetics.

The continued lack of physical buttons on either phone is a major plus for me. I have avoided Samsung since the S4 until they removed the physical button. The S4 felt plasticky and creaky and the button got particulates behind it and felt crunchy. There is nothing even remotely similar to that on these phones, they're rock solid.

Comparison photo of the S8+ and Note 8: 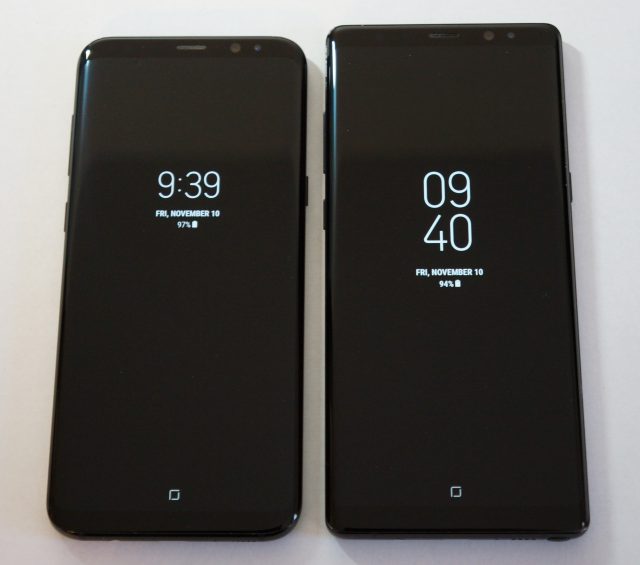 The Qualcomm Snapdragon 835 chipset in the Note is blazingly fast, I can't slow the thing down even when I try. It's been bulletproof so far. This is the UX that I've wanted for a long time. It feels faster than the S8+, though I haven't benchmarked either phone. I don't typically benchmark my phones as I'm less interested in the actual numbers and more interested in what the phone is like to daily drive.

The Note 8 is absolutely snappy with 6GB of RAM. Multitasking is effortless, and like I said before, I can't slow this thing down despite trying. The S8+ has 4GB of ram and is quite able, but the Note 8 really does shine here. Split screen on both phones is useful thanks to the tall aspect ratio, but having the ability to have split-screen-launching-icons in the edge menu on the Note8 reminds me to use it as well as the edge menu more often. Frankly, I have the edge menu turned off on the S8+ and use it consistently on the Note 8. Things like having the push to talk button for discord pinned to the bottom of my screen while I use other apps is quite handy, but rarely remember to launch both apps, go to the task switcher, and split screen them. (Plethora of screenshots demonstrating the Note 8's split icons at the end of the article)

The Note 8 has not only one of Samsung’s best cameras, it has two. There are now dual cameras on the back, a first for a Samsung flagship smartphone. It takes brilliant portrait photos, and you can even edit the depth of field post-capture. It feels revolutionary, even though I am decidedly not a camera nerd. The S8+ really does take very nice photographs but the Note really seems intent on producing the best photography possible.

Battery life between the two seems pretty equal, even though the S8+ has a slightly larger battery. I'm not completely sure what magic makes that possible, but a giant like Samsung tune these things with intent, especially after the Note 7. I just wish they'd added battery and thickness rather than what I suspect: choosing a target run-time or screen-on-time and going with whatever makes that happen. Even though I would love to see more battery I will mention that the battery life on these things is substantially better than the Nexus 5s that I was coming from.

Summary: They're Both Great

When swiping away from the edge in that area, it brings up the edge menu, in which you can add a split screen shortcut:

Here you can see that I've launched the Slack/Discord split screen shortcut. I use this to chat or browse the web while I'm in a meeting in Discord, so that I can still easily use the PTT feature while researching or digging for links:

Here you can see that if you hit the home button the split screen view is still available until cancelled. You can navigate back to it via the app switcher button (notice that it changes) and the notification in the tray:

Here's a shot of the notification:

Read more reviews about the latest smartphone on TechCo

Maker, Tinkerer, Writer, Reader, Tech aficionado. I live near DFW and enjoy the quirky side of life.