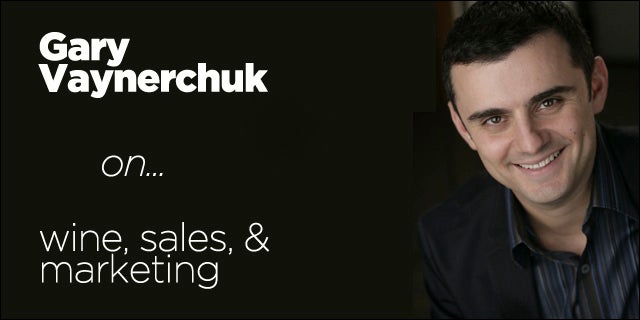 Few people command a room quite like Gary Vaynerchuk, a widely-renowned wine aficionado through his days at Wine Library TV, the author of a pair of NY Times Best Selling Books – Crush It and The Thank You Economy, CEO at VaynerMedia, and a noted new technology/social media visionary.

But above all the accolades, the (not-so) secret behind Gary V's success has to do with how he executes.

Vaynerchuk was one of the first to revolutionize Twitter being used for business with his extremely high-touch, one-to-one, personal marketing while running WLTV.  He is recognized as one of the hardest working men in the business.  And the wine guy, turned author, turned digital agency CEO, understands the art and importance of crafting a personable and engaging story.

The result: ~ one million followers on Twitter and a impassioned army of supporters chomping at bit to get a taste of his next project.

I recently had the opportunity to catch up with Vaynerchuk to learn how much wine Gary has spit out during his career as a wine taster, how to be a “real” salesman, his next book – “Jab Jab Jab Jab Jab Right Hook”, and how to rock a Tech Cocktail Mixer.  Below are excerpts from our conversation followed by the full audio at the bottom of this post.

On his current project:

“VaynerMedia accounts for 95% of my time [right now] outside of speaking and writing my new book, “Jab Jab Jab Right Hook”, but it ties so deeply to what I do at VaynerMedia.”

On the new book:

“The subtitle is, ‘The Formula to Tell Your Story in a Noisy World.'  I think that people are really struggling on how to produce content and how to do context marketing in the new world we live in.  I go into a really heavy thesis on why creating content for Facebook, Twitter, Tumblr, Pinterest, Instagram, all these things matter…There's a lot of case studies on pieces of content and why I think they're done well or poorly overall.”

“I've really learned a lot from writing the last couple of books and feel very in position to be a better author this time.  Even though my last book was called ‘The Thank You Economy' could have been called ‘Jab Jab Jab Jab Jab'.  I've come to realize that the people who most innately understand social media are actually not very good salespeople and so they forget to throw the right hook.  Everybody else who doesn't get it is doing right hook, right hook, right hook – and that's why I'm so obsessed with this kind of formula.”

On wine pairing (with bacon):

“Assuming bacon is the main dish, I'm a big fan of brunello…  In general Italian red wines have always spoken to me when I've had bacon.”

On spitting out wine (how much and the most expensive):

(Thanks to Jimmy from Wedgies for the question)

“I'd say the volume of wine that I've spit out in my life, could probably fill up, maybe five or six pools.  Normal standard size swimming pools…I might even be underestimating that.

“I've definitely [spit out] $400 or $500 bottles on Wine Library TV…I've done some tastings in Bordeaux where I'm tasting hundreds, if not thousands of wines that day, and have definitely spit out wines that have touched the $2,000 – $3,000 per bottle range.”

Gary's personal brand (in one word):

“Real.  That's because I don't have any other gear.”

Advice to those who haven't discovered their passion:

“People who struggle to find their passion tend to be practical, and so if they can somehow zen themselves out enough to ask themselves truly what they would be doing if there was no dollar implications or failing implications, ‘what would you do with your time?'  That's ultimately the way to get there.”

“I was just doing this myself.  A lot of people would think [for me] it was watching Jet games.  The reality is they only play on Sundays.  Would I spend all of my time going onto Jets bulletin boards and going on there talking about the Jets?  The answer is no.  I want to sell stuff, and that's what I do.  Whatever variation it is, I'm selling stuff.  Whether it's selling wine, selling ideas, or services, I'm a salesman– and good one through the story telling ability that I have.”

On being a “real” salesman:

“I think bad sales people are fake.  It's very easy to be a real salesman; that's why I'm so successful.”

“I just came out of a meeting where I didn't get the business because I refused to waiver on my POV and not be real.  I did not appease the decision maker- I actually hurt his feelings, and that's how I roll, because I want to be right.  That's what makes you a good salesman.  I think that person will come back and do business with me in three years.”

On the VaynerMedia approach toward social:

“The biggest thing small businesses can take away from us is having a way to story tell per platform.  How do you make the time and effort you put into Facebook the most valuable, even if it's only 10 minutes?  We're really predicated on the execution.”

On The Oatmeal philosophy toward social media and engagement:

On the next evolution of online marketing tactics:

“One-on-one marketing his here, and soon people will realize it.  How do you scale the unscalable?  Why did I stand in a booth for five hours and answer questions?  Because it's the next evolution to what I was doing three years ago which was responding to people on Twitter.”

“You can always push service further.  You can always push caring further…We're not even remotely close to putting customer service on the offensive as a marketing tactic.  Right now Wine Library TV and Zappos are just scratching the surface.”

Will high-touch be ruined by marketers?

“I think it's happening right now with the hand written letter.  A lot of people are doing it as a tactic.  It's all predicated on the energy behind the action.”

Best Thank You to a customer:

“Driving a case of wine to somebody during a snowstorm, that was a $30 case of wine, always sits in my heart as an example of where I really, really brought it.”

“That minute before I take the stage, I'm equally thinking that I'm on the verge of giving the speech that's going to change my life, as I am thinking I'm about to give the speech that's about to end me as being a good public speaker.  I've literally got both of those feelings battling each other as I hit the stage.”

On showcasing at a Tech Cocktail Mixer:

“That was the first tech event I ever did.”

“Be humble and bring value.  I didn't try to act cool or say ‘I'm coming into this world but I've already been successful, so you should respect me.'  I started from the ground up…I was basically the help.  I was behind the table pouring wine.  But I brought value.  I was giving away swag, I was giving wine and interacting.  Humility and bringing value are very important.”

Startups, come share some humility and value at an upcoming Tech Cocktail Mixer in a city near you.  Just like Gary V.