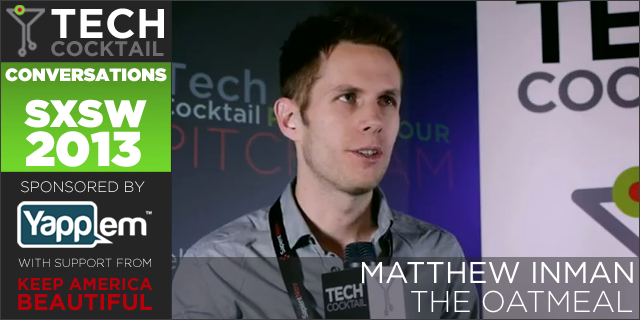 Who is the creator behind The Oatmeal, a wildly popular comics site?

His biography on the site isn’t particularly useful: “The Oatmeal's real name is Matthew and he lives in Seattle, Washington. He subsists on a steady diet of crickets and whiskey. He enjoys long walks on the beach, gravity, and breathing heavily through his mouth. His dislikes include scurvy, typhoons, and tapeworm medication.”

You could try to learn more about Inman from his comics. For example, he seems to dislike religion, have a keen understanding of cats, and loathe printers. He put his time and social capital into raising money – $1.3 million to be exact – for a Tesla Museum. He also raised $210,000 for charity instead of paying $20,000 in a bogus lawsuit.

Inman was at SXSW this year to present a keynote about these crowdfunding campaigns. His books, How to Tell if Your Cat Is Plotting to Kill You and 5 Very Good Reasons to Punch a Dolphin in the Mouth (and Other Useful Guides), are also available in the SXSW bookstore. And Inman stopped by our SXSW Startup Celebration sponsored by CEA and .CO. He talked about his creative process, what it’s like to have huge popularity, his favorite comic, social media tips for startups, and cats. Here’s the video.