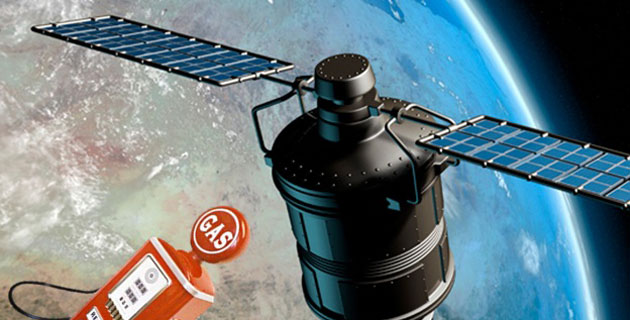 A satellite costs roughly $299,938,500 more than a Prius and yet unlike the Prius it can't roll up to a gas station when it runs low on fuel. In fact, satellites are rendered useless when their fuel tanks read empty.  When they run out of fuel, these technological marvels convert to $300 million worth of flying space junk.

You see, satellites today have the same issue that early adopter car owners experienced 100 years ago . Imagine that you were one of the first 100 people to buy a car.  You'd drive out of the dealership on a full tank of gas.  Drive out into the country and cough, sputter, gasp.  You're out of gas.  You think when there were 100 cars on the road that there were Exxon Quick Marts every few miles? Nope, you had to really plan your Slim Jims and gas refueling stops.

Well satellites are like those first cars.  There aren't any Quick Marts in space either.  But what if there were? When the typical satellite leaves its useful life due to spent fuel, the electronic component payload is usually still operationally functional, yet rendered useless because the satellite can no longer be kept in a useful orbital position.

This situation is advantageous for the large satellite manufacturers like Boeing, because satellite customers need to purchase replacement equipment every 15 years when their satellites drift out of useful orbit.  Imagine how happy Ford stockholders would be if you had to purchase a new Taurus every time your car ran out of gas.

But what if there was a gas station in space for satellites? 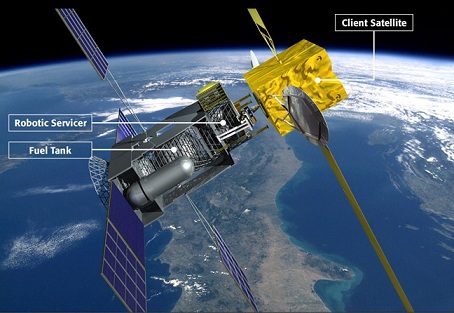 Enter a partnership between Canadian-based MacDonald, Dettwiler and Associates Ltd. (MDA) and satellite service provider Intelsat.  On March 15th, MDA and Intelsat, headquartered in Washington, DC, announced a $280 million partnership. According to the two companies, MDA plans to launch its Space Infrastructure Servicing (“SIS”) vehicle into near geosynchronous orbit, where it will service Intelsat satellites and other commercial and government satellites in need of additional fuel, re-positioning or other maintenance. In addition, MDA has selected Intelsat as its exclusive channel to bring on-orbit services to the US Government.

This partnership involves launching a robotic servicer unit with fuel capacity to refuel anywhere from 10 – 15 satellites, potentially doubling the life of these satellites, which should prove to enhance satellite capacity and reduce the cost of satellite services.  Intelsat has committed to purchase half the fuel for the first servicer, which is projected to launch sometime in 2015.

Intelsat General President Kay Sears said she was confident that numerous U.S. government agencies will be interested in SIS now that Intelsat and MDA have disclosed their plans.

It's likely that starting in 2015, satellites will have the ability to refuel in space.  Just like gas stations, the SIS will carry the satellite version of high test and regular (Bi-Propellant & Mono-Propellant, two of the major fuels used in satellites).  Unfortunately, the service will not accept credit cards and there will be no attendants to clean the windshields.  Fortunately, the SIS will not contain the bane of the weary traveler found in most roadside service stations…the less than stellar road trip rest rooms.