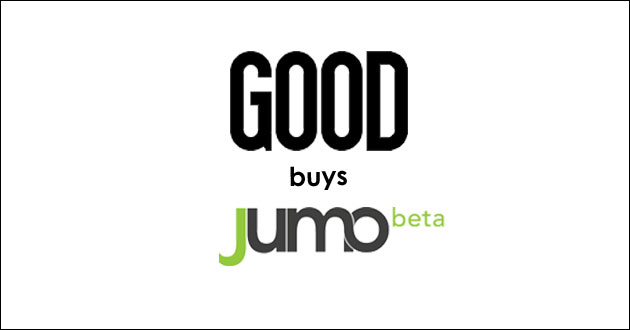 Today Good, a magazine and online publishing platform focused on doing and spreading good stuff, announced the acquisition of Jumo. A young site that has received lots of attention, Jumo is the creation of Facebook co-founder Chris Hughes. It's essentially a social network for do-gooders. Since it's launch in March it has gone through a few redesigns and continued to grow, but it may not have been the overnight success that the team was looking for, especially for Chris who was coming off his role as director of online organizing for the 2008 Obama campaign.

So what does this deal really mean for the much anticipated startup, Jumo? Well, it was sold for $0 to Good, who has a similar niche, so Good gains access to an open source platform for social good that has been in the works for a few years. Jumo's 16 employees now have an opportunity to interview with Good and potentially stay on board (although it's no guarantee), and Jumo founder and CEO Chris Hughes is now a senior adviser at Good. So in startup world, this is probably a failure (everyone needs one to talk about at conferences, right?), but in the real world it might be considered a nice success and compromise as the company found a new home for the platform and some of its employees, and Chris Hughes can move on to do his next thing, whatever that might be.

What does the deal mean for Good? Founded in 2006 as a print publication where part of your print subscription went to a non-profit of your choice, Good has built an online audience with about 3 million visitors a month. They have done this through various types of content from videos to infographics to articles. Good founder and CEO, Ben Goldhirsh, explained in his recent article that they are looking to do more:

“We love doing this, and we're going to do more and more of it. But we think there is more we can do as well. We think that playing a team game against the challenges we face will be the most productive and exciting path toward our potential.”

So part of that team game is building out a community like Jumo to help spread the love of all the various opportunities to help. It's also worth noting this is Good's first acquisition (if you can call it that), so we look forward to seeing how they integrate it into the rest of its properties.