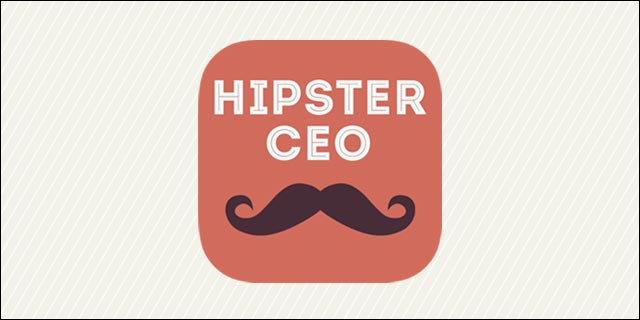 After having had Hipster CEO sitting in my iPhone for a few months, I finally decided to give the game a thorough try a couple of weeks ago. And, as it turns out, even fake, virtual startups can be difficult to run. 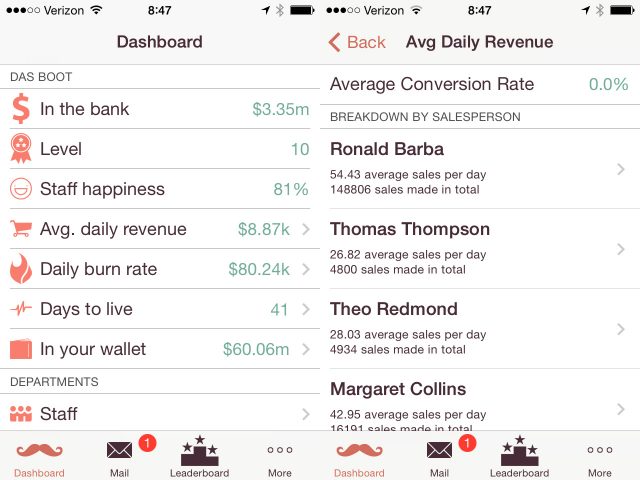 Much like an actual startup, on Hipster CEO you have to keep an eye on various metrics to ensure that you've got enough cash to survive at least another month.

Hipster CEO is a game that essentially attempts to simulate what it's like to launch and run your own startup. I can describe it best as a kind of Sim City for startups, minus the fun visuals – a Sim Startups, if you will, for accountants…or business analysts. For the most part, the game is largely text-based, but don't let this throw you off – it's a really addictive game, especially if you're interested in all this startup stuff.

“I’m super passionate about startups and wanted to give people a taste of what it was like to run one,” said Ger Kelly, who created Hipster CEO. “Whenever I told someone I worked in a startup they would inevitably tell me about their idea for an app or website that would make them billionaires. I wanted to give them the chance to see just how much work goes into founding and growing a company – that it’s not just a matter of ‘build it and they will come'…I really wanted to target the ‘wantrepreneurs' out there – the people who are convinced they can build the next Facebook.”

You start off by selecting your product idea from a preset list, which includes a dating app, file-sharing service, messaging app, mobile gaming service, microblogging service, and others. Then, you select a target market – again, from a preset list (more markets can be unlocked in gameplay): tech geeks, health freaks, or beer enthusiasts. From there, you're provided with around $14,000 and one employee (you) to get things running. I won't divulge too much, since players can get a lot of entertainment from exploring the game's various startup processes, but you'll get to do anything from hiring specialists and ensuring employee training, to upgrading your office environment and maintaining staff happiness. 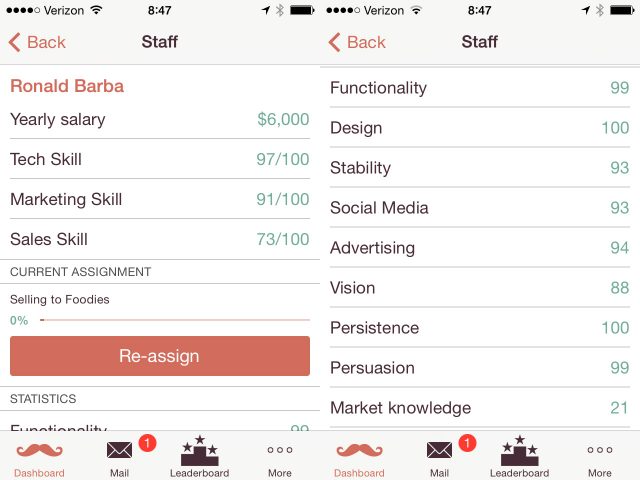 Hiring the right talent is key in Hipster CEO, and there are certain skills that you want to look for and develop per your marketing, sales, or technical needs.

After completely going broke on my first venture, some social media whatsit, I started a microblogging service targeted at technology geeks. Five hours later, I found myself selling out and accepting an acquisition offer for about $10M. While that seems high for a virtual game, it pales in comparison to what others have been able to reach (if the game leader board is of any indication). Although, honestly, I don't know how people have been able to accomplish such high scores – Hipster CEO is truly a challenging game.

For instance, just when you think you have your perfect team of sales, marketing, and tech people – with all the right skills – two of your sales people may jump ship and join another competitor, ultimately putting a large dent in your average daily revenue. Or, maybe, early on you decided to accept funding from an investor who only wanted 2 percent equity in your company (what a good deal!), but you didn't pay attention to their aggression and eventually find said investor gradually increasing their equity throughout the game and making more business decisions on your behalf and it gets super frustrating and all you want to do is cry and find that stupid, fake, virtual investor and punch them and ughhh you wish they would just burn in hell (pro tip: never accept an investment offer from anyone whose first name is Natalie). 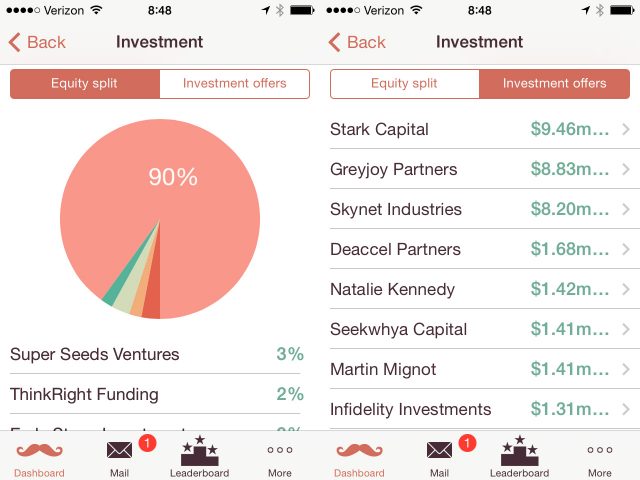 On Hipster CEO, investment offers come in depending on how well your startup is performing. Don't underestimate the effects that an investment can have on your long-term success/failure.

While the game largely mimics various realities of running a startup, it fails in a few aspects. For one, you simply can't use the money you received from selling your previous startup toward your next venture. Instead, that money gets hoarded into your wallet, where it can then be spent on ridiculously overpriced and pointless in-game assets that can't be used toward anything. Kelly assured me that these things will change in future iterations of the game, but for now we're left with having to spend that acquisition money on things like a pair of “Groogle Glasses” that costs $5 million.

I haven't touched Hipster CEO in a week (mostly because two of my best marketing people abruptly left my team and I don't want to put in the effort to try to lure them back), but after thirty minutes of gameplay, you yourself will understand just how addictive the game can be. But, again, the game isn't for everyone, and Kelly's okay with that:

“Some people find the game boring which is okay because a lot of people who ‘get it' spend hours and hours on it. I’ve had some people spend over 100 hours playing the game which is crazy stuff – I never expected that level of interaction…When it comes to building a product, [I think] it’s a good idea to polarize people. You can only get strong positive reactions if you get strong negative reactions – the worst thing in the world is if everyone feels ‘meh’ about [it].”

Hipster CEO is currently available for iOS. You can learn more by visiting the Hipster CEO website.