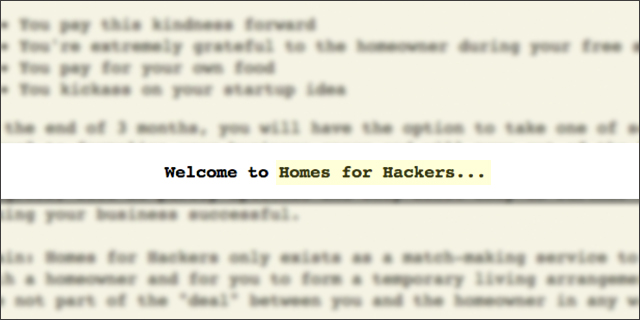 Kansas City’s startup scene just got a huge boost in the form of a four-bedroom house, the first property in a project called Homes for Hackers.

Run by web developer Benjamin Barreth, Homes for Hackers plans to offer three months of rent-free housing to startups who move to Kansas City. And the city will soon be connected by Google Fiber, warp-speed Internet powered by Google.

The first home is a four-bedroom place in Hanover Heights that Barreth recently bought. That neighborhood will be the first to get Google Fiber, which is rolling out slowly across the city. In the future, Barreth hopes to find other homeowners who are willing to host entrepreneurs for free.

His first tenant is Threed.ee, which makes software that integrates with 3D printers. Cofounder Mike Demaray was drawn to Kansas City by the low cost of living, and the lower level of “noise” than Silicon Valley or Boston, where he’s from – it’s easier to network and get noticed.

“I needed a place to basically hunker down and focus on my startup,” he says. “I realized how hungry everybody was to get fresh people out here, get some new ideas.” Demaray also plans to run hackathons and a podcast out of the house.

The Hanover Heights house joins the growing KC Startup Village, a grassroots concentration of startups in southern Kansas City. It already includes a handful of startups and the Google Fiber office.

Buying a house wasn’t something Barreth planned; in fact, the whole Homes for Hackers idea was just a crazy suggestion. That is, until the local Kauffman Foundation invited him over for lunch and encouraged him to do it. One down payment (and a liquidated retirement fund) later, he’s now the landlord of the first hacker home.

The Hanover Heights home still has room for three more entrepreneurs. To apply for housing or hosting startups in your home, sign up here.