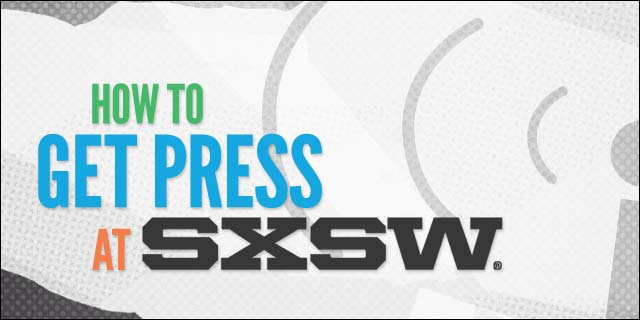 Getting exposure at SXSW is a bit like trying to flag down a bartender at a crowded bar. You may very well spend the whole night waiting, but too much persistence can be annoying. Still, there are better and worse ways to do it. Here are five tips for getting your message across.

In 2010, Foursquare caught the attention of SXSW-ers with literal game of four square outside the convention center. This type of marketing stunt, or guerilla marketing, can actually work – if you’re creative enough and don’t try too hard. After all, Group.me won over the crowds in 2011 with a simple spread of free beer and grilled cheese. Uber did the same with branded pedi cab rides that would pick you up and usher you off to the next party. And ParkMe took a risk last year by tagging cars with fake parking tickets and boots – and it paid off.

But your guerrilla marketing can go awry. Don’t forget about BBH Labs, which was called exploitative after it paid homeless people to carry around wifi hot spots.

Be Part of a Trend

Mostly likely, any given journalist doesn’t have the time to cover your startup on its own (assuming your marketing stunt was a bust). Your best hope might be to get a mention in a longer article about trends at SXSW. After all, everyone wants to predict not just the next big thing but the next big industry. So pitch your startup this way, and don’t be afraid to mention similar startups that you see around the conference.

Getting exposure is not just about press – you can also put your name on the map with potential partners, investors, and users. For partnerships, head over to the SXSW trade show to find larger corporations and bigger-budget companies. If you’re looking for other startups to collaborate with, find them at these locations. Get easy face time with book authors during the book signings, and gain new mentors during the mentor sessions.

Like pulling a marketing stunt, trying to tweet something funny (that actually gets attention) is a long shot. But sometimes it works. And if not, you can gain some RTs, a few dozen Twitter followers, and possibly a mention in a roundup of SXSW tweets. For example, these funny tweets about how branded SXSW is and the maelstrom of Twitter activity got handpicked and showcased in an article. Just don’t try too hard – the Internet can smell a poser.

Don’t Expect Too Much

Tens of thousands of people will be in Austin next week, all vying for attention. Your startup isn’t a failure if you don’t make a splash.

This is the main reason why many experts advise startups, for heaven’s sake, not to launch during SXSW. Mark Suster, a partner at GRP Partners, provides this reality check about throwing your own party: “Your crappy $10,000 will pale in comparison to the budgets of the big tech and media companies. So anything you do will feel small in comparison. Your efforts to corral your tight-knit tech followers will work for five minutes but even they will feel the pull to be at the really cool tech party where ‘everybody will be’ that starts at midnight.”