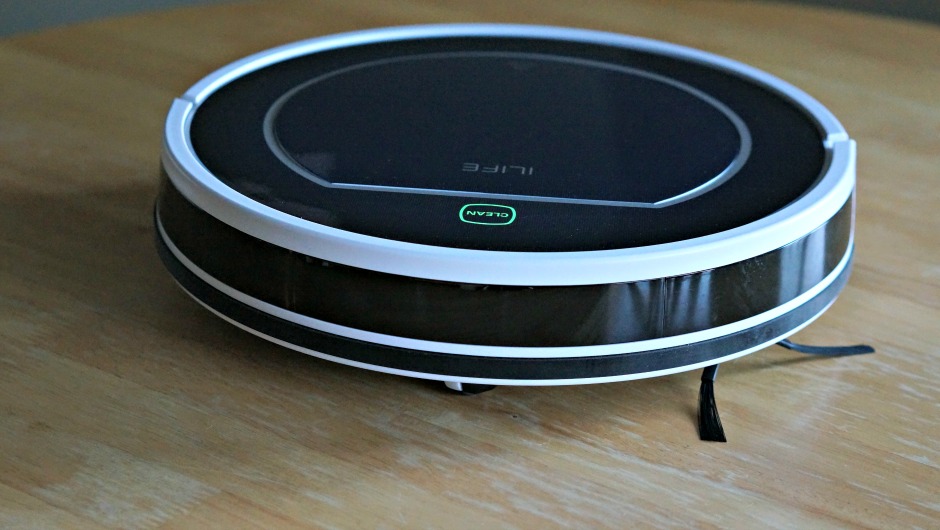 Robotic or automated vacuums are not a new concept. However, over the years, they have become increasingly more affordable and filled with even more features. Roomba being the most well known version still comes at a premium price as it has the best track record as far as hardware and software goes, but what about the off-brand versions that are all over Amazon and sites like GearBest? At first glance, they appear to be about the same price of an entry-level vacuum cleaner, have similar or more basic features, and in theory should save you time.

We got our hands on the iLife V7 Robot Vacuum cleaner to see if these versions are worth your money. Over the course of a month and in preparation for a move, we used the V7 on a daily basis to combat a house filled with two hairy dogs.

The setup process for the V7 is incredibly easy. There is no software to install (though there is an app, but it is not in English), no calibration to be done, it’s as simple as unboxing it, hitting the on switch within the unit, letting it charge, then kicking it into clean mode. If you do buy one, it's important to realize that the on switch is under the unit and under the cloth and bracket. We're letting you know now because we know you’re not going to read the instructions and will become frustrated by it not turning on.

Once charged, there are a few different modes to choose from, such as spot cleaning, full room cleaning, or scheduled cleaning. You can also direct the V7 with the included remote. Depending on how often you use it or have been vacuuming, you’ll likely only need to dump the canister once per cleaning. It’s relatively small, so it’s possible you’ll need to do it twice depending on the amount of foot traffic or pet hair you may have around.

Overall this was about as easy of a setup process as we could have hoped for.

If you are looking for a full vacuum replacement, you’re not going to get that with the iLife V7. Think of the robot as a sort of holdover, a cleaner that will do a lot of the heavy lifting during the week, but your carpets could probably still need a regular full vacuuming on the weekend. With that said, this little thing works incredibly well. Not only does it do a great job of general cleaning, it gets under most furniture and in the nooks and crannies of your place due to its extended sweeper. As far as suction goes, it’ll pick up dust, hair, and small things, but will leave anything large behind.

The reason why we’re calling this the best drunk room mate is quite simple. The iLife V7's included software isn’t exactly smart. It roams around your place, cleaning in what appears to be an almost randomized pattern, up until it finds a wall or ledge. From there, it scans the area and roams onward until the next wall or barrier.  On top of the randomized path, it really, really loves to get stuck on things, making it a clumsy drunken fool. Unlike some of the more expensive units, the iLife V7 won’t map your house or allow you to create virtual boundaries. Instead it has two basic automated modes and allows you to control with with the remote.

If you have a room that you want cleaned, press the edge mode and the V7 will do a pretty good job of getting every inch of your floor. If you had a minor spill or an area you’d prefer it to work on, it also has a spot mode. From there, it will spiral outward cleaning the area. To send the robot home, there is also a button on the controller, which will have it find its way back to the charging base station. This worked generally well, and only once gave up on its journey two rooms away from the station. Unfortunately the automated components are a little bit wonky.

V7 will get stuck, often, especially on computer wires. We can’t even count how many times it ran off with a Macbook charger only to get stuck later. It’s just inevitable with it’s low clearance and small wheels, but on the flip side it does handle carpets really well. Although there are automated rules that instruct the V7 to try to get unstuck (usually moving backward), it commonly runs into issues where it just spins its wheels and gives up until you rescue it. Once again, this sort of like a drunk roommate but this one actually cleans and doesn’t eat your pizza.

There is also a timer setting that should send the V7 off to do its thing at your desired cleaning schedule, but the system seemed to have some issues and never really went off. To test its sensors, we also put it on a kitchen table and let it do its thing. As it gets to the edge, two sensors are triggers preventing it from falling to its doom. On the front, it also has a bumper so it will lightly tap things to ensure it can’t move past it.

Overall the cleaning mode works well, but automation needs a bit of work. Fortunately, the V7 is more of a set it and forget it type deal until it steals your charger.

Typically when we dig into a gadget’s design, we look at the shiny components that make it stand out. However, this is a vacuum cleaner, so we’ll just be digging into the functional design.

As noted in the features sections, the iLife V7 has a tendency to get caught on things. If you have accent carpets, cords/wires, toys on the ground, or pretty much anything that doesn’t slope upward, the V7 is going to get stuck most of the time. While this does allow it to get under most couches and your bed, you’ll occasionally hear it cry out (ok, beep) that it got stuck and needs you to pick it up.

One of the other differences you’ll get with the V7 is that it’s not too noisy, at least when compared to a traditional vacuum cleaner. It does still make sound, kids will still jack up the volume on the TV a bit to drown it out, but it won’t terrify your furry house mates.

Overall the functional design of the iLife V7 allows it to clean a great deal of your home, but has a tendency to get stuck on non-flat surfaces.

Should you buy the iLife V7 Robot Vacuum? Yes, absolutely. Sure, this is considered a knockoff brand compared to Roomba, but quite simply the product works. Being an off-brand device, there was some initial hesitancy about how effective it would be, but after seeing how easily the device was able to get into most nooks and crannies, it become a part of our daily rituals. This should almost be a mandatory device if you have an animal that sheds as well.

In a fully carpeted first floor, the V7 was able to collect about a canister of dog hair (from two small dogs) every few days. Yup, that’s pretty gross. Unless you have a full time maid, that means you’d likely have to vacuum every other day to keep your place up, but with the V7, you just press the button and let it do its thing. We give the iLife V7 Robotic Vacuum a 4 out of 5 due to it saving people time, doing a generally good job of cleaning, but having a few issues such as getting stuck on things or the timer mode being finicky.