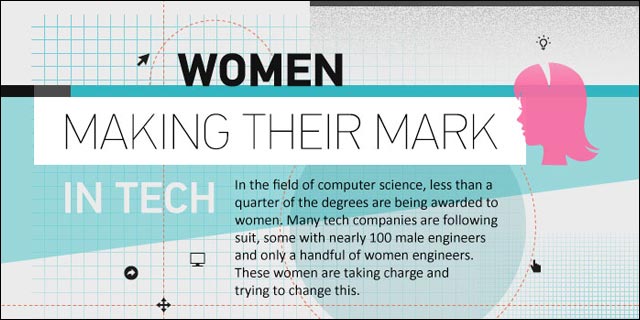 The IT industry has got a bit of catching up to do when it comes to women in the workplace, as they represent half of the workforce worldwide, but only occupy a quarter of the jobs in Information Technology.

The STEM professions (Science, Technology, Engineering & Math) seem to be a good example of where the inequality problem lies, with just 15% of women finding a job in a STEM profession after gaining their degree, compared to 31% of men in the same position.

This disparity is not thought to be any reflection on a woman’s ability to achieve the same level of competency as a man but is more attributed to the barriers that still exist for women in general, simply because they take on the caretaker’s role in a family by default.

Even if a woman is single and does not have family commitments to consider, they would appear to struggle to achieve the same salary levels as their male counterparts do with a STEM-­based career. The average male can command a $91,000 compared to $75,000 for a woman working at the same level of seniority and with equal qualifications.

The situation is definitely changing and this infographic highlighting women in technology not only demonstrates a history of inequality but on a more positive note, points to some rising female stars who are breaking new ground and providing encouragement for women to make their mark in a STEM profession.

This article was contributed by Chris Beck who is a Content Producer/contributor and also a well published freelance writer in the insurance and tech space. Originally from Asheville, NC and a University of South Carolina Alum. I am also an avid Gamecock sports follower... I have a family of four including a twin brother, 6 if you include our Fox Hound and German Shepard.