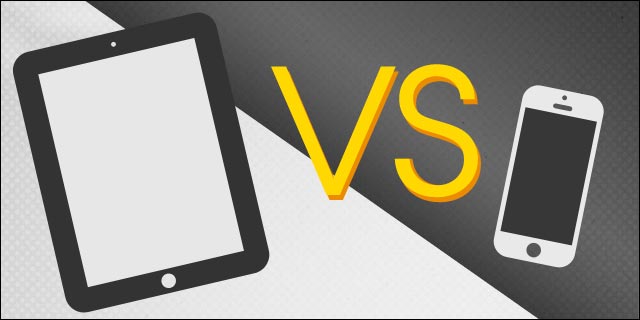 Not only have smartphones had an impressive proliferation in the mobile device market, but tablets have become almost as popular for entertainment and business. For example, Apple has developed a concrete market over the last few years by introducing increasingly useful and engaging iterations of the iPhone and iPad. These gadgets have received great response from the market pertaining to their effective utility as well as posh designs.

Developing for the iPad and iPhone isn't all that different, on the surface level. However, if you take a closer look, there are, in fact, some important differences to note. when developing applications for the two devices.

Due to wide differences in screen sizes, it becomes necessary to create difference user interfaces for both these devices due to the differences in user experiences. Even if the designing part may be developed in native or hybrid methods of app development by using cross-platform tools, there exists vast difference in maintaining user interface. Designing guides are provided by Apple under HIGs (Human Interface Guidelines) to utilize synchronized tools while creating UI. Also inhibiting UI features within iPhone and iPad apps becomes far easier by using these guides.

With the advancement in applications and large mass of users downloading it from the Apple store, the iPad and iPhone have been diversified in terms of applications that they support and use. So it would not be a surprise to see a new App store for iPad within few months. Due to diversified usages of both these devices, creating separate stores becomes inevitable as the same app may not be available for the other gadget. Some generic business and education apps may have no point of utility on iPhone even though they are perfect apps for iPad – and vice versa. So iPad app developers should keep an eye on this possibility in distribution.

Other than technical aspects, one important factor that needs to be taken into consideration while developing apps is keeping the target audience for a particular app in mind. For example, apps geared toward children might be better suited for iPad since kids enjoy large graphics and being able to tap and swipe with ease. However, business apps may do better on iPhone since business people tend to work on the go. Also, apps for visually oriented tasks, such as interior design and cooking, might do better on the larger screen of the iPad.

The differences between iPhone and iPad applications can be highlighted in various ways by technical variations that exist between them. So app developers have to be well-versed with iOS versions and demands to explicitly develop applications that get recognized in the market.