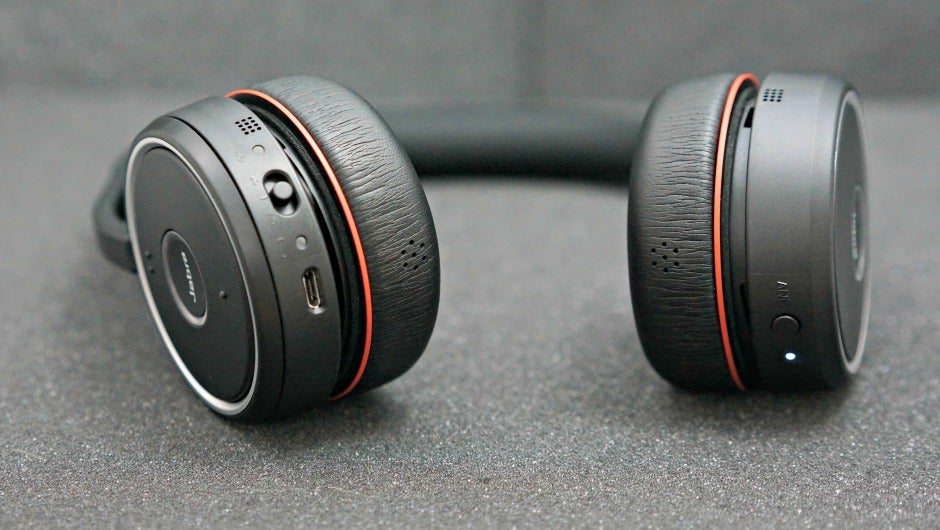 If you’ve worked in a startup in the past decade there’s a good chance you’ve worked in an open office layout or maybe even in a coworking space. In theory they are designed to foster collaboration, but in reality all it brings is noise and distraction (and maybe some really good nerf wars). Fortunately for people like you and I, this has also forced companies to rethink their layouts or in other cases spring for noise cancelling headphones for their employees. Jabra, a well know audio brand, recently released their latest solution, Evolve 75, for such an environment, and it also includes an adjustable microphone as well.

Designed to be comfortable, boast great sound, block out your colleagues attempts at small talk, all while looking pretty sleek, the Jabra Evolve 75 were developed with open office dwellers in mind. These wireless, on-ear headphones are priced competitively to that of Bose and Beats, many of which also integrate microphones in them, but also lack technology to prevent that component from pulling in ambient sound. To see if Jabra was up to the task, we used these over the course of about two months in an agency’s open office setup. 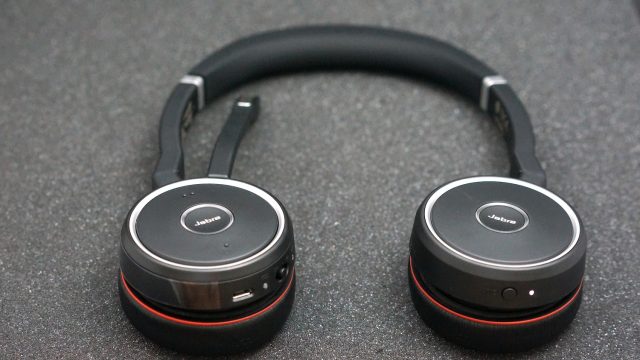 Like most bluetooth connected headphones the Jabra Evolve 75 takes only a few seconds to get connected to your device. Because it features Bluetooth 4.1 is also has the ability to connect to two devices at one time, or a more likely scenario being your computer and smartphone. When turning it on using a physical switch you’ll also be greeted with personable audio prompt.

Most brands now use some sort of non-human sound to let you know that it’s booted up, but Jabra includes a woman’s voice that lets you also know how much battery life is left, which is a nice little touch. For those less tech savvy people, this is also probably the better approach for getting connected. Once ready to pair, the same voice will let you know if the device successfully connected. However, one very nitpicky thing is that the audio queues always reference your device as a smartphone, even though this is clearly designed to work with computers as well. The Evolve 75 is also certified with most office communication platforms like Skype, so there should be no issue adjusting the settings on the app/platform to use the built in microphone. 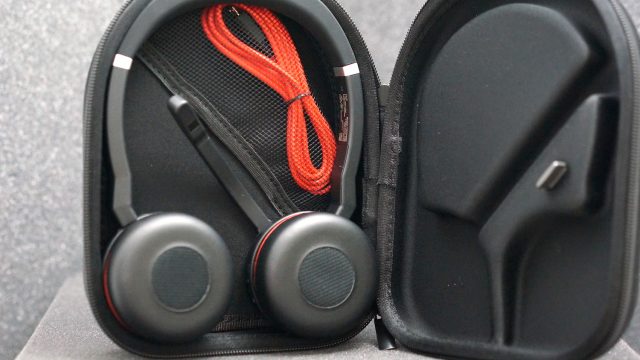 Unlike most noise cancelling headphones, the Jabra evolve 57 differentiates itself because it also doubles as in a microphone built in. For sales teams they are more of a necessity, for everyone else having remote meetings and being able to dictate text to your computer is a value added.

For an open office, noise cancelling headphones are a must, but if you’re going to make calls or having a meeting near people, the microphone needs to be able to block out ambient sound as well, which is exactly how we’re breaking this device down. Besides those two components, the next most important is battery life, which these knockout of the park. With a whopping 15 hour lifespan, these can also continue to work while plugged in, but that’s likely to never be an issue.

Jabra is already well known for their audio devices, and typically receive rave reviews as well, so we went in with relatively high expectations for the Evolve 75 wireless headphones. Starting with some basic podcasts, the audio came out crisp and with the ideal level of volume. More and more these headphones feel like they have an audio governor on them, but balance out well. Even at full volume the podcasts did not get muddied over, which is common in cheaper headphones.

On to testing the highs, mids, and lows, I switched between a bit of rock from Foo Fighters, excessive bass tests, and through some basic EDM and trap music. To my surprise the bass on these things are killer. Across the full spectrum these not only have a solid output, they don’t rattle your head like a tin can either. For highs, these too sound pretty great, but some reason at mid level things just feel a bit hollow.

Overall the audio sounds pretty damn good when you’re listening to music and podcasts, but for some of the more lyric driven music it may not be as crisp as you’d like.

For call quality I put these through several Google Hangout, Skype, and phone meetings in various parts of the office. Each time the audio in and out came out great, and had no issues from the other end as well.

In an open office environment you get all sorts of ambient sound. From phones ringing, to the clicking of keyboards, to that one coworker who keeps forgetting to pair their headphones to their computer (hi, that’s me). Because of this, a high quality microphone is needed so that a call with a customer, client, or colleague is not filled with these distractions, let alone actually being able to talk to one another. On the microphone part they work wonderfully.

As for the noise cancellation, there is only a single ANC setting, and it works ok. Due to these being on-ear, there is a bit of adjusting needed to ensure they are most effective and cupping against your ears. If you wear glasses like I do that becomes a bit difficult, but for the most part the audio level and built in technology will block out most of the ambient sound. With that said, if I compared these to Libratone’s on-ear Q Adapts, their technology entirely blocks out audio around you, but also have four settings to adjust how much or how little you hear.

Overall the call quality output from the microphone on the Evolve 75 is wonderful, but for noise cancellation there is still a bit to be desired. Some of that may be due to wearing glasses, but if that’s the case that’s a bit of an issue in itself. You’ll still be able to block out most of your surroundings though. 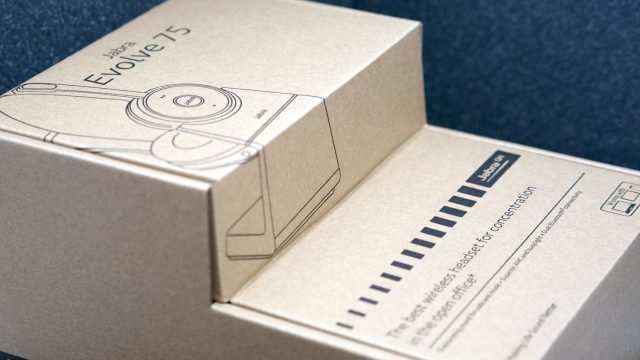 Simple in design, yet durable for clumsy people such as myself, the Jabra Evolve 75 wireless headphones fit right in at the workplace. The majority of the headphones are a plastic material and features a flat matte black finish, and the cans have a faux leather material to cushion it a bit. The cans themselves are really designed to be more of an on-ear experience, however they are slightly oversized, but that is likely tied to their active noise cancellation feature.

For a person who wears glasses though, I did not find this to be the most comfortable headsets out there. I ran into a similar issue with the Libratone’s, but more so with these. Also, the faux leather tends to get a bit toasty, which is common for over the ear and on ear headphones, but I would not survive most of the day wearing these. They also feel a bit weighty at .4 pounds, though I ended up getting used to them.

The Evolve 75’s also has an optional charging dock as well (they can be purchased together), which adds a bit of fanciness to your office decor, but it doesn’t seem to add much functionality beyond the standard charging cable. The one little standout feature on these are tied to the mic. Rather than just lifting it up on a swivel, it stays firmly against the headset due to an inset magnet.

Overall the Evolve 75 wireless headphones are designed to be durable and fit in well with an office environment, but if you have glasses they may not be the most comfortable. 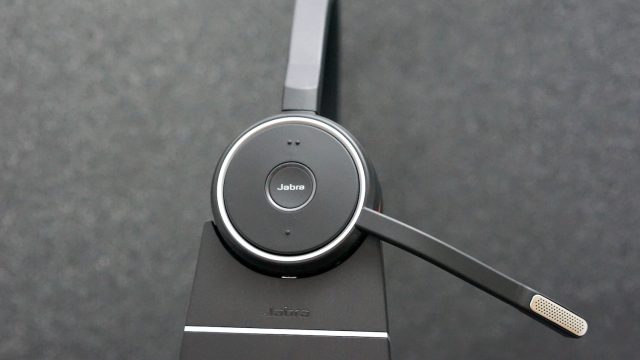 Should you buy the Jabra Evolve 75 Wireless headphones? If you work in an open office environment and often need to take calls or hold remote meetings, then absolutely. Not only do these work great on calls, especially its ability to block out incoming ambient sound, the audio quality is generally very good. While I was not impressed by the hollow mids, bass is amazing, volume is perfect, and highs are crisp. However, if you’re just looking for a great pair of noise cancelling headphones, these are probably over kill from what you need, and you can also find some slightly better priced ones at that. We give the Jabra Evolve 75 wireless headphones a 3.8 out of 5 due to their price point, offering, and features.

Where to buy: Jabra, Amazon

Read more reviews on headphones and athletic earbuds at TechCo