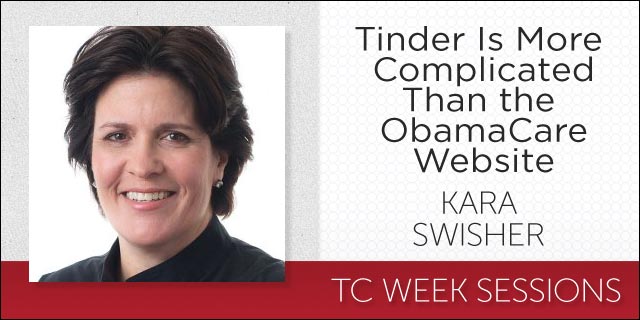 In April, Swisher went on NBC’s Meet the Press to talk about ObamaCare, and was struck by the difference in mentality between the government and the tech industry.

Eight weeks? Whereas in the tech industry, minutes of downtime cause an uproar. “Every day, people use Google and eBay and Amazon and they work beautifully, and when it doesn’t work, you’re shocked,” says Swisher. “It’s like electricity – people turn on the switch and the light goes on. You don’t even think about it. A broken website in this day and age is a missed opportunity.”

She contrasted it to a technology like Tinder, the dating app. “Even Tinder does 12 million matches a day and it’s quantumly more difficult what they’re doing – people moving, dating, 12 million matches, geographic,” says Swisher. “Tinder is harder.”

The whole episode reminded her of the disconnect between how government sees technology and how techies see technology. “It was interesting to watch the mentality of Washington,” she says. “It reminds me (having lived there for so long) how backwards they are in terms of what’s about to happen.”