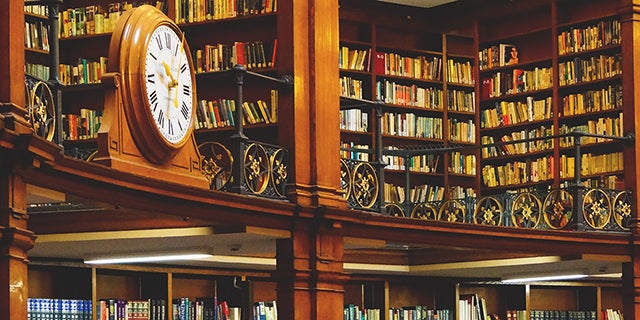 This morning, the Knight Foundation announced the winners of the Knight News Challenge on Libraries, which challenged people from around the U.S. to reinvent and innovate the ways through which people experience our country's libraries. Focused on adapting libraries to the digital age, Knight awarded funds to eight projects that utilize in technology to advance libraries in an increasingly tech-dependent society.

“There is a growing demand for libraries to evolve their role and become more dynamic, living platforms, responsive to community needs,” said John S. Bracken, Knight Foundation vice president for media innovation and director of journalism, in a statement. “The winners are working to reinvent the ways in which people experience the library, and providing citizens with the tools and information they require to contribute and strengthen our democracy.”

Overall, 22 projects will be awarded a portion of the $3 million total prize; the Knight Foundation received almost 700 entries when they asked for proposals last September. Eight of the winning projects will receive between $130,000 and $600,000; these projects are those for which the Knight Foundation believes are significant library initiatives that could become permanent innovations. In addition, 14 “early-stage ideas” will receive $35,000 each from the Knight Prototype Fund to help them develop their ideas into actual prototypes.

Here are the 8 winning projects in the Knight News Challenge:

Culture in Transit from Metropolitan New York Library Council ($330,000): The project aims to help more communities share their histories online by creating a mobile kit that will scan and digitize print materials for public archiving in partnership with Brooklyn Public Library and Queens Library.

Library for All: Digital Library for the Developing World ($265,000): Will make books and educational content available at libraries and schools across the developing world through a digital platform designed specifically for low-bandwidth environments and accessible on mobile devices, including low-cost tablets and $30 feature phones.

The Library Freedom Project ($244,700): Provides librarians and their patrons with tools and information to better understand their digital rights by scaling a series of privacy workshops for librarians.

Measure the Future from Evenly Distributed ($130,000): Helps libraries better manage one of their greatest assets – the building itself – by using open hardware to track data about its public spaces.

Open Data to Open Knowledge from City of Boston ($475,000): Will turn Boston’s open data collection of everything from building permits to potholes into an accessible resource by working with Boston Public Library to catalog it and make it easier for residents, researchers and public employees to navigate.

Space/Time Directory from the New York Public Library ($380,000): Will work with local communities and technologists to turn historical maps and other library collections into an interactive directory for the exploration of New York across time periods.

Here are the 14 projects receiving money from the Knight Prototype Fund:

BklynShare by Brooklyn Public Library (Brooklyn, NY): Enables people to learn new skills through a service that connects knowledge seekers with experts in their own neighborhood.

The Community Resource Lab by District of Columbia Public Library (Washington, D.C.): Advances the library as the primary anchor of an open information system that connects residents to essential health, human and social services.

Information for Innovation by Kent State University Library (Kent, OH): Explores ways to provide information services to local entrepreneurs and business counselors, to see what services they might need to reach their goals.

Journalism Digital News Archive by University of Missouri Libraries and the Donald W. Reynolds Journalism Institute (Columbia, MO.): Ensures access to digital news content through development of a model for archiving and preserving digital content that can be used across the country.

Maker Tool Circulating Kits by Make it @ Your Library (Chicago, IL): Shares the tools and technology of the maker movement by prototyping an equipment lending system – a process for sharing maker kits between libraries – that builds on existing interlibrary loan frameworks.

Making the Invisible Visible by Bibliocommons (Boston, MA): Prototypesan app to give patrons a deeper library experience based on the user’s location, interests and actions in the library.

This Place Matters by Marshall University (Huntington, WV): Explores the potential of a location-aware mobile application to share African American history and link to library resources.

Your Next Skill by Seattle Public Library (Seattle, WA): Helps people acquire new skills or expand their knowledge by creating a librarian-led, referral service that connects users with materials, classes and instructors that will help them meet their goals.