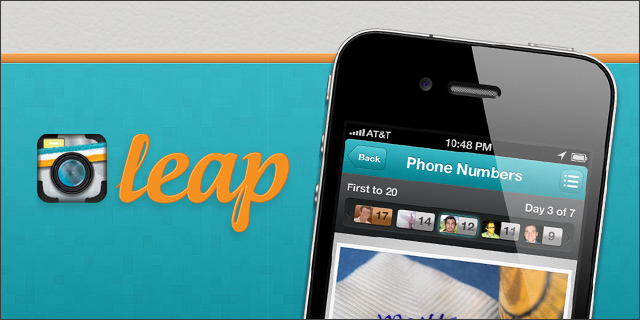 Let’s be honest – trying to one-up your friends is an effective way to constantly improve upon yourself and become the best version of you. And it’s just plain fun. James Dickerson and his team know this – it’s why they’re launching Leap, an app that allows users to create challenges with their Facebook friends and compete by snapping pictures from their phone. According to the founders, Leap is like Instagram if it got competitive.

Leap will leverage Facebook relationships to post and share challenges. Users can create their own challenges or choose from popular ones such as Hipster Hunt (users snap picture of interesting people in their city) or Breakfast Champion (users eat a healthy breakfast each day of the week). “This gives the users freedom to create their own competitions and gives us an opportunity to observe what communities these challenges are most powerful in,” said co-founder Dickerson.

If any of this sounds familiar, it’s because the same ideas were applied to the Leap team’s former venture, Wellthy. I wrote about Wellthy last fall and how this app was motivating users to adopt healthier habits through competition.

While Wellthy is no more, the team is still going strong, but now they are 100% Leap. I asked Dickerson about the change-up and how Wellthy evolved into Leap.

By beta testing Wellthy with twelve companies, the founders discovered that “a social game for corporate wellness was more of a vitamin than a painkiller,” according to Dickerson. They also found that users really wanted to compete around their interests, not necessarily health.

Perhaps the most important insight gleaned from Wellthy was the idea that competition can be powerful, but competing against people you know and care about motivates people to make behavior changes or complete challenges.

Getting their second product ready for launch has given the team their own set of challenges. Ryan Dickerson, the tech founder, who has been coding since fourth grade, had to teach himself Objective-C to build Leap. But there are advantages of walking down a familiar path as well. “I think the second time around we have a much better understanding of what people are looking for, and we have a much bigger network of mentors and supporters that are helping us out,” said Dickerson.

As for my two cents, from having covered both products, I’d have to say that Wellthy was a great idea, but too narrow in scope. Social competition is fun and engaging, and I believe Wellthy took advantage of that. What Leap looks to do is open this idea up and allow for more creativity on the part of the users, as they create their own challenges to complete with friends.

What would you challenge your friends to do? You can check out the app and request an invite at Leap’s website.