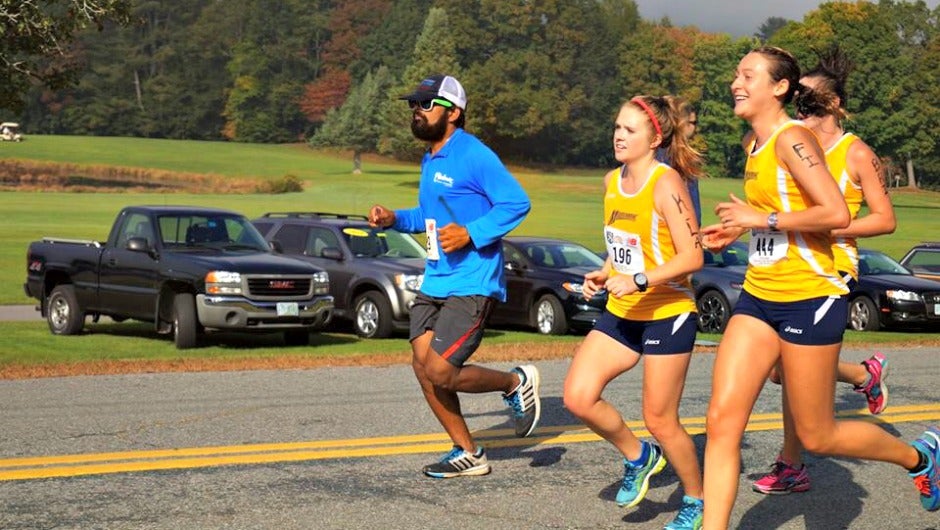 Entrepreneurs face endless challenges. It may sound cliché but it's true. Every entrepreneur will travel very different, but surprisingly similar journeys, encountering failure, stress, success, and roadblocks along the way. This means that an entrepreneur must have more than motivation, but also strong emotional intelligence, people skills, and leadership skills in order to achieve their goals. More than anything, persistence and perseverance are often a common element among entrepreneurs, because more often than not they will be pushing themselves beyond their own perceived limits. After all:

In the case of Sandy Naidu, cofounder of WebileApps, he likens life as an entrepreneur to that of running a marathon. Naidu’s statement is particularly fitting, as he’s not just a young entrepreneur, but has also finished running a marathon in all the 50 states and 7 continents including Antarctica. In fact, Sandy is currently the youngest person in the world to do so.

“When you are young, you have so much energy to do this stuff, you think you are invincible. What running marathons has taught me is that patience is key. You may not achieve what you want immediately. You also may not have specifically planned for it or know everything that you need to know to achieve that goal, but you can’t give up easily,” said Sandy.

Like most entrepreneurs, Sandy didn’t follow any kind of structured path to leading his own companies. His experience is based on trial and error, self-education, and passion, which mirrors how he got into long-distance running. At first, he began running for fun. Eventually his running became an excuse to explore new places, travel, and challenge himself. It’s this same mentality that Sandy applies to both how he works and lives, a balancing act between passion and perseverance.

As a young boy, Sandy was raised to be immersed in scholastic studies. He earned good grades, listened to his parents, and followed through his expected check-list.

“There is more to life than just listening to parents and getting good grades. I got them, but that was not what I was happy with the most,” said Sandy. “There was always this slight discomfort, not that I wanted more fun than getting good grades, but I craved something different.”

After receiving his master’s degree, Sandy began to get some freedom, but worked a 9-5 job before deciding to follow his own path. At first, traditional constraints held Sandy in a place on the East coast. Between rent and bills, he did what many entrepreneurs do at first, which was having a side project.

“You have to pace yourself. For entrepreneurs? It’s the same. Having emotional intelligence and running marathons give you the psychological advantage. You are not losing your focus,” said Sandy. “Running has taught me a lot, and it changed my lifestyle. At first I used to go too fast in the start of wasn’t paying attention to eating, sleeping, etc. It all comes into play. I was becoming more conscious about what I do.”

Before Sandy’s first metaphoric mile was complete as an entrepreneur, he made many mistakes. He pushed his body beyond what it was prepared for, all while running a marathon each month and not allowing himself to recover. However, he never gave up and kept saying he wanted to give it one more try.

“You have an idea, you think, ‘hey we can get this done.’ In entrepreneurship everything seems simple and everyone seems to be on the same page, but as the company grows, something as simple as a phone call gets complicated. That’s why it’s so important to have a vision and stay focused.” 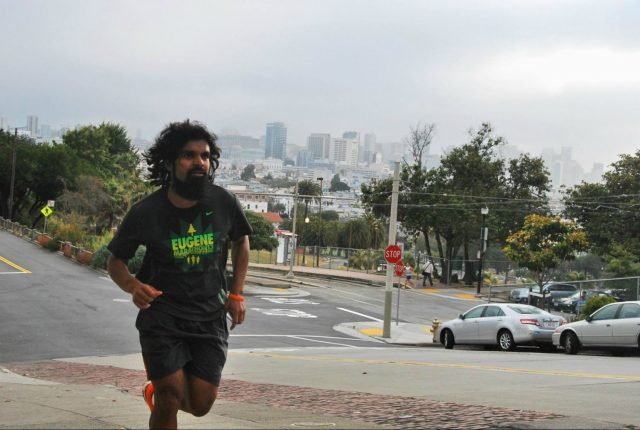 Entrepreneurs typically don’t fit traditional molds when it comes to business, let alone social norms. Work-life balance? More like work-life integration. Sandy, the once studious kid who always listened to his parents, not only pushed his physical self to the limits by running a marathon each month, he pushed his professional self by cofounding a business. He became a rebel. It may not sound like much, but the biggest challenge and catalyst that led Sandy to push past the 9-to-5 life was moving to San Francisco.

“This was one of the biggest decisions in my life: Quitting the job, moving, it’s not easy,” said Sandy. “I relied on friends and my cousins along the way. Not knowing where your next penny comes from was stressful. On the East coast it was even harder. In San Francisco, they don’t care as much, if you are in the office, wearing suits or have a clean shaved face as long as you are getting the work done. Now that I think back, it sounds easy, but it’s not,” said Sandy. It’s a combination of things that made the decisions easier, but I know many friends that want to do what I’m doing, and it’s not an easy decision.”

Just as in business, Sandy also continues to push himself as a runner. Though always dedicated, he never put much emphasis on his pace, that is until recently.

“Running is part of my lifestyle now, and my next goal is to run a marathon in each country,” said Sandy. “For now, I’m focused on improving my pace to qualify for Boston. I’ve had really good days, and I feel like I have more pace in me, so now I’m pushing it. Although at the very beginning “Boston Qualification” was my initial motivation to keep running, I quickly realized that I also liked traveling and running became an excuse to travel.  Now that I have finished running the states and the continents, I am back to what got me started. For me, passion is an ongoing journey as much as I have energy. Fingers crossed that I will be just as enthusiastic” with this new goal.” 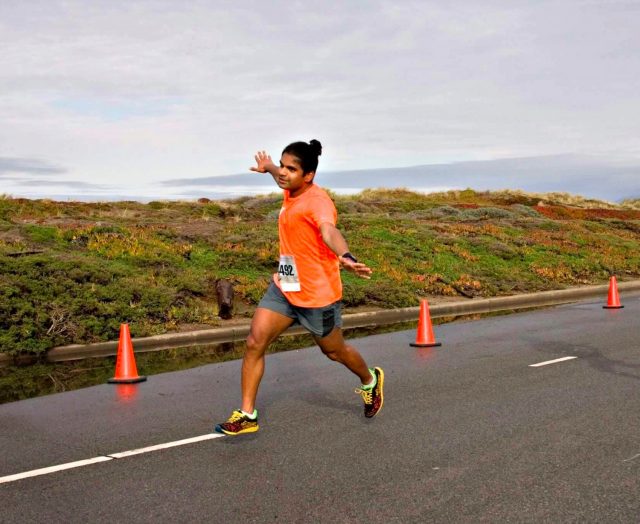 There is a common mentality between runners, perhaps more of a joke than anything. For each race, for the pain endured, there is a level of dislike that builds before crossing the finish line. However, once the race is over, the dislike immediately goes away and you’re ready to start preparing for the next challenge. No matter if a personal record was achieved or it was simply for completion, it’s about staying focused.

“I don’t just do things because it’s fancy or fashionable,” said Sandy. “I don’t want to do things because it’s a checklist item. I don’t drink, and even on a Friday night, I’d want to go out but I have to wake up early in the morning  on Saturday for my long run. It is not easy, and I don’t want to make it sound easy. But it’s about staying focused. I’m a goal oriented person. I always have this conversation in my own brain.”

Sandy went on to jokingly say that at times, he feels that he has a split personality, arguing, debating, having conversations with himself. “What does Sandy’s Brain say, and what does Sandy’s Heart say?” So he writes things down to decide what he should do, what he wants to do, and of course what he should avoid. This allows him to stay focused on the goals in front of him.

In running and in entrepreneurship, Sandy is also generally very tough on himself.

“I have a goal, a dream, and didn't know how much is needed to achieve it. I started running because I wanted to qualify for Boston. I didn’t know what it would take, and I was very naive. I had no reference. Sometimes you have to experience things and go through it to understand. I made my own rookie mistakes.”

For Sandy, he initially started off as a solo runner, but found that group running helped him the most. He started running with friends and that pushed him forward. He believes in the “Power of the Pack.” Just as he did with training for a marathon, his co-founders and current team allows his work to thrive.

“You need to be kind to yourself and give yourself permission to make mistakes, but not repeat them. Be selective who you listen to or take advice from. I’m not married, and I don’t own a car or house. All those typical checklist items, especially as you age, it’s very hard to say no to those things and stay focused. You need to do you and be you. Allow yourself to make mistakes and keep learning and loving self to move forward.”

This feature is part of an ongoing series to show the correlations between entrepreneurs and endurance sports (athletepreneuers), with a special focus on those who continue to push themselves to their limits. Stay tuned for additional features, interviews with the most popular tech and platforms for these athletes, and a downloadable version with exclusive content in the coming weeks.