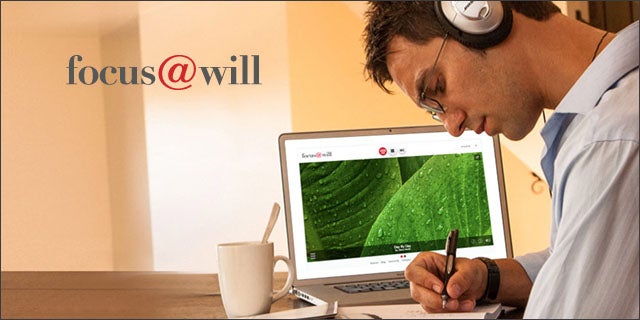 If you’re one of the 50 percent of people who listen to music at work, you probably think it helps you focus. But if you strapped yourself up to a brain scanner, you’d find just the opposite.

Music is designed to engage your body and mind through your limbic system: “the part of your brain that is always on the lookout for danger, food, sex, or shiny things,” explains Focus@Will. It engages your emotions and urges you to dance, siphoning away mental resources.

But Focus@Will has figured out a way to re-engineer music so it increases your focus and productivity. You can choose from seven different channels – from classical to electronica to ambient – that feature re-mastered tracks to help you get in the zone. Around 350,000 users are already listening to Focus@Will via their web, iPhone, and Android apps. You can listen for free, or pay for special features and analytics.

Focus@Will is led by CEO Will Henshall, a songwriter known for “I’ve Been Thinking about You.” Working with neuroscientists, he’s found that people who listen to Focus@Will while working see a 12-15 percent increase in the focus biomarker and are able to focus for five times as long – 100 minutes instead of a mere 20.

It works because the music is designed to be just engaging enough to help your brain filter out distractions – like ambient noise and movement – but not so engaging that you actually pay attention to it. As Focus@Will explains, slower music (at around 60 beats per minute) increases alpha waves, which are associated with the psychological state of flow.

But it doesn’t work for everyone: one out of three people won’t experience the benefits. It has to do with brain type, says Henshall. If you think of a spectrum running from very chill to ADD, Focus@Will works for the two-thirds in the middle, but not the extremes. It can work for musicians, but they have to learn to turn off the music-analyzing part of their brains – something Henshall has done successfully. They’ve also seen a lot of interest from programmers, lawyers, and journalists.

I tried it out a few times, and it seemed to work (although according to Henshall, you absolutely know when it’s working). He advises people to play around with different channels: you’re not looking for music you enjoy, just whatever manipulates your brain the right way. I finally settled on Focus Spa, which is soothing music, and I still listen occasionally. Apparently your tastes may change day to day.

Focus@Will’s secret sauce is the way they re-master and mix the music. Our brains can get habituated to music after 20 minutes, so the focus-heightening effects would decrease. But Focus@Will makes sure to introduce some novelty into the tracks, tweaking things like the intensity, speed, emotions, or style. That way, you stay at the optimal balance of hearing it yet not hearing it.

Henshall recognizes the irony of being a musician who’s creating music that’s not meant to be heard. But he embraces it. After all, it’s better than a lot of the “ephemeral” and “dumb” music that’s being created these days – a sentiment that many of us would probably agree with.