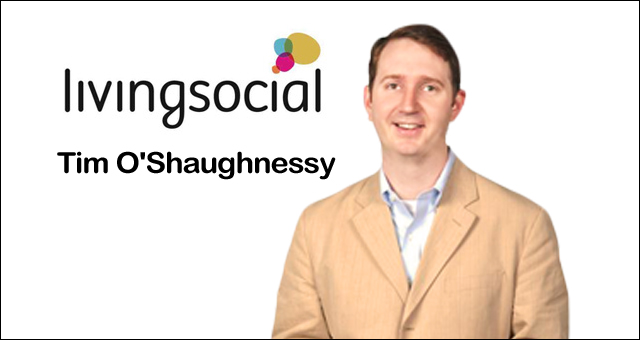 On Wednesday night in Washington, D.C. Tech Cocktail's CEO Frank Gruber had an opportunity to sit down with Tim O'Shaughnessy, Co-founder and CEO of daily deals giant LivingSocial.  It was a great chance  for the crowd to soak in some words of wisdom from a founder who's been through it all and come out on top. Frank had the opportunity to ask a lot of serious and some not so serious (let it be known that Tim does not believe in breakfast) questions about the past, present, and future of one of the country's most successful startups.

After working in product development for several years, Tim started his first company, Hungry Machine, with a team of former coworkers.  Hungry Machine was a consulting and app development company.  During their run they developed some of the most popular early Facebook apps such as “Pick Your 5” and “Virtual Bookshelf.  They got in the Facebook app game at just the right time, or what O'Shaughnessy refers to as the “sheep throwing” days.  Breaking Bad fans can also be jealous because the Hungry Machine team were some of the first to screen the pilot episode while creating an app for AMC.

Despite the success of Hungry Machine, O'Shaughnessy always saw it as a means to an end.  The paradigm shift of Facebook allowed him to collect data on user acquisition while also taking note of where these users were living and what they liked to do.  In 2008, Hungry Machine made the pivot to LivingSocial.  He had carefully watched the market transform, and after hearing about a then little-known company called Groupon, decided to take a chance with a similar platform.  However, LivingSocial would differentiate itself by taking a more social approach, introducing promotions such as Me+3.

O'Shaughnessy credits Hungry Machine for giving him the startup capital to build LivingSocial (Hungry Machine earned $850k in profit during their last month, which was then funneled into LivingSocial).  In June 2008 LivingSocial raised $5M in a Series A round and continued to develop their product.  They offered their first deal in July 2009.  Since then they have raised almost $1 billion in funding.  While raising so much money is considered a huge success for many, O'Shaughnessy is hesitant to consider it as such:

“Raising money is a means to an end and not a success in and of itself.”

In January 2010, LivingSocial's employee base of thirty-five could easily fit in one room.  How things have changed in three short years.  They now have over 6,000 employees throughout twenty-seven countries.  They have officially reached the status of–in my own words–‘huge-ass corporation'.  Despite these impressive numbers, they still operate as a startup in many ways.  In fact, O'Shaughnessy still considers the company a startup.  One point that he came back to several times during his chat with Frank was that even today the company is still working things out and making mistakes.

O'Shaughnessy offered some sound advice for those just starting up or thinking about starting up.  First of all, he says that the perfect business is one that “doesn't raise a lot of capital and doesn't hire employees until they are operationally ready.”  He also touched upon company culture and the importance of hiring the right people who fit that culture and being able to let go of the people who don't.  Lastly, he talked about transparency–how important it is to be upfront with your customer base.  Let customers, employees, and shareholders know that “we're gonna screw up…it's gonna happen.”

It takes a certain mentality to be a CEO such as O'Shaughnessy.  He has the unique ability to look at every setback as a challenge to overcome rather than a headache.  Even when it seems like you're out of options or the challenges are insurmountable, take a step back and look at it from a different angle.  In O'Shaughnessy's words: