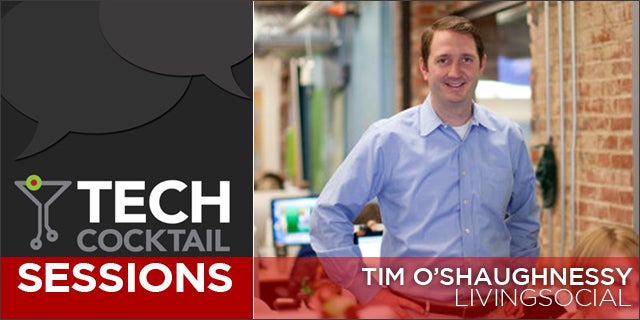 Not only is Tim O’Shaughnessy anti-breakfast, he’s against the traditional take on whether a startup is, or will be, successful. Metrics like capital raised and number of employees hired shouldn’t be the only focus, the LivingSocial CEO and co-founder explained at our Tech Cocktail Sessions event in DC. According to LivingSocial‘s O’Shaughnessy, it’s all about the infrastructure.

“A lot of times people glamorize the number of employees you have and the amount of capital that gets raised, and actually I think it is the inverse,” O’Shaughnessy says. “The perfect business is the one that doesn’t raise capital because you’re not diluting yourself of the your most precious asset as a business, which is your ownership stake. [It's also] one that doesn’t hire employees before it’s operationally ready to because the tax and the cost on that is really expensive.”

Of course, as we all know, LivingSocial has raised plenty of money. However, “Raising money is a means to an end and not a success, in and of itself,” according to Tim. Instead, it is the operational work, from building out HR and securing office space to time zone challenges and communication hurdles. This is the unsexy part of startup life, yet it is the core of any successful business, no matter what stage it is in.

O’Shaughnessy went on to describe how scaling as quickly as LivingSocial has can challenge even the most well-planned companies. Even though the company was founded in 2007, O’Shaughnessy says, “We’re still a giant startup. We don’t have everything figured out yet.”

Watch Tim O’Shaughnessy discuss the iterations that led to LivingSocial with Tech Cocktail’s CEO and Co-founder, Frank Gruber, in the video below.