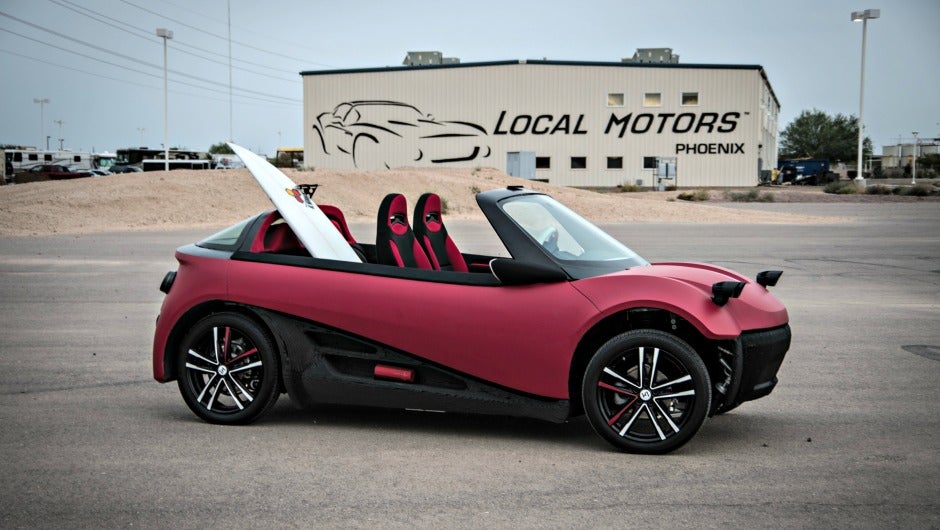 Leading up to Celebrate 2015 we spoke with Local Motors CEO Jay Rogers about the future of the company where he let us in on their upcoming Indiegogo campaign set for Spring 2016. As part of that campaign, this week the company announced the LM3D Swim, part of the first 3D printed series.

This particular model will consist of nearly 75 percent 3D-printed material in the form of a single piece, but they eventually plan to increase it to 90 percent. The body is a mix of 80 percent ABS plastic and 20 percent carbon fiber. Like many of the 3D designs in the series, the LM3D Swim concept came from Local Motors community, Open IO.

According to a statement from the company, “the LM3D Swim was designed by Kevin Lo, a Local Motors community member who won the company’s Project Redacted challenge in July. The winning design was chosen by community votes and a judging panel that included former Tonight Show host Jay Leno and SEMA Vice President of Vehicle Technology John Waraniak.”

Interestingly enough, another design by Lo was recently making the rounds, a custom Domino’s delivery SUV. It appears to be based on his render and second place award in a Local Motors competition from 3 years ago.

With the LM3D concept now in testing, Local Motors’ goal is to make the car safer than traditionally manufactured cars. They expect crash testing to be complete by the end of 2016.

“In the past few months our engineers have moved from only a rendering to the car you see in front of you today,” said Rogers. “We are using the power of DDM to create new vehicles at a pace unparalleled in the auto industry, and we’re thrilled to begin taking orders on 3D-printed cars next year.”

Although the Indiegogo campaign will have vehicles starting at $30,000, this particular model has a targeted MSRP of $53,000. The manufacturing and delivery of the LM3D Swim are expected to begin in early 2017. The car will be printed and manufactured at the upcoming Knoxville, TN microfactory, set to be completed by the end of 2015.