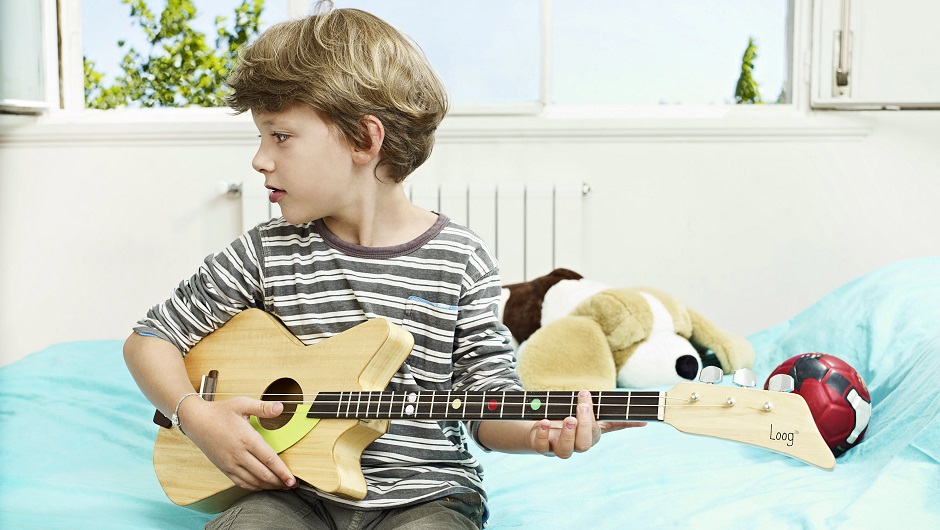 First conceived as a master's thesis at New York University and then spending time as a 2011 Kickstarter funded at quadruple its initial goal, the Loog guitar is now the banner product at NYC-based startup Loog.

The guitar provides a simple, easy-to-learn kids' version of a guitar: It's a three-string instrument that uses actual guitar strings and can be tuned just like any other guitar. I had a chat with Rafael Atijas, the startup's founder and CEO, as well as the author of that master's thesis I mentioned. Here's what he had to say.

How did you settle on your company's mission?

“It took us some time to figure it out and we actually had to make a decision there: Was Loog a well-designed children’s guitar (and just that), or was Loog an experience designed to make it fun and easy for children to play music? It took us a while to figure out that our mission exceeded the physical product and that’s when we got it right, I think.”

What makes your guitars stand out?

“As a general rule, children’s guitars are just cheap (and cheaply made) scaled down replicas of regular guitars. We really tried to re-designed them from scratch with the goal to make it fun and easy to learn. With that in mind, we decided that they would have only three strings, which still allows you to play chords and full songs, only that it’s way easier.

Our guitars also come unassembled and we do that because when you build your own guitar, you develop a feeling of ownership and accomplishment that stimulates you to play more. Another big difference is that our guitars come with an app that has everything you need to learn to play: video lessons, chord diagrams, a tuner and even a songbook so you can learn by playing real songs — The Beatles, The Rolling Stones, Taylor Swift, Katy Perry, Bruno Mars and more.”

What educators or institutions have you helped, and how was that experience?

“Yes, we love working with schools and educators. One of our favorite experiences in that field is what David Mills is doing at the Neighborhood Music School in New Haven, CT. In his own words:

‘I can have a class of students all playing a song together within about 15 minutes on their first day. To date, I have used the Loog to teach hundreds of students including students in the hospital, students with learning disabilities, students who also study a classical string instruments, and even advanced guitarists who need a better understanding of music theory as it manifests itself on the guitar. I started the 3-string concept using ukuleles, but ukes are not sized properly, and they lack the “cool” factor of playing a guitar. Now, my students stroll in public with their Loog Guitars strung over a shoulder just to have someone stop them and ask for a demonstration. Parents tell me that they leave the Loog out on the couch, and every man, woman and child who visits just has to pick it up and give it a strum. Even my self-conscious teen students will pick up a Loog that's lying around. No doubt — the Loog is cool.'”

What's in the future for Loog?

“In 2017 we’ll launch new models and that has us very excited. We are also working hard on new content for our app and a cool new product that we are developing with one of our favorite tech companies in the world. Hopefully, we’ll be able to unveil all this at the NAMM Show next January. Until then, that’s all I can say.”

Any advice for entrepreneurs hoping to take a path similar to yours?

“Not that I feel qualified to give any advice, but since you ask: surround yourself with talented people, ask a lot of questions to those who have done something similar to what you want to do, and know that it will probably take time before you can make some money. So be prepared: try to get the necessary funds (investors, loans) that will cover your operational expenses.”