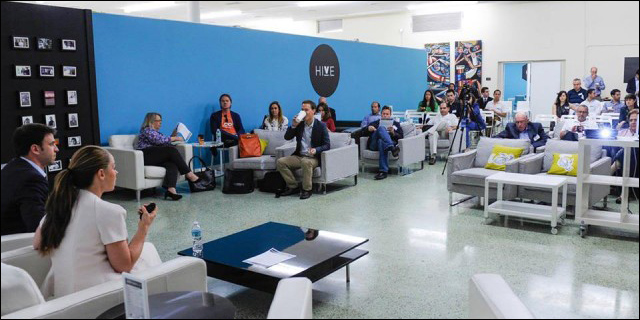 Miami is quickly becoming a startup hub for international tech companies. Latin American businesses especially have become a vibrant source of ingenuity and new ideas. And not surprisingly: Miami is perfectly positioned to serve as the connecting force between the Latin American and the US markets. With its incredibly diverse cultural landscape, it is a city in which new ideas collide and bursts of startups are born. I have even heard Miami called the Tech Capital of Latin America.

As a cultural melting pot, Miami is a uniquely advantageous place to launch or run a multilingual, multi-market app like Everypost. Specifically, assembling a team of creative, capable individuals who speak English and Spanish is eminently more possible here than anywhere else in the world. On my team, we are all bilingual — even our two interns speak Spanish and English fluently.

By a factor of its being such a diverse and culturally rich place, Miami is also a city of great global insight. With minimal effort it is possible to gain an informed perspective on a multitude of different markets, throughout Latin America and beyond. It offers the attractive position of having all the economic stability of the United States without severing connections with the Latin American market to the south.

As Manuel Medina, founder of Terremark, a Miami-based data-services company acquired by Verizon in 2011, explained, “In Latin America, there is an insatiable appetite to acquire new technologies.” That Miami can act as a bridge between two regions of the world makes it a perfect place for startups that have one foot on either side of the divide.

But it’s not all fun and games. Like almost any startup hotspot, there is a shortage of dollars to fund new projects. The budding community means it is still in need of investors, and given the size of the community, it has been slow to do that. Compared to Silicon Valley’s eye-popping $12 billion in venture capital investments last year, Miami’s $369 million looks like pocket change. But take into account, however, that just three prior in 2010, that cash influx was less than one third of what it is today, at only $102 million. Giving the funding scarcity, it can sometimes prove challenging for new startups to get themselves off the ground and running.

Yet in spite or (or perhaps because of) the limited financial resources for startups, a great sense of community and solidarity has risen up amongst the budding technology businesses. Refresh Miami, the brainchild of South Florida-native Brian Breslin, is a technology entrepreneur organization that hosts lectures and events, aggregates useful information such as job openings, and helps to draw attention to the startup scene. Breslin is credited with fostering the Miami startup community that has come to thrive in the past few years.

Incubators and accelerators in the region, most notably Venture Hive, also contribute to the kinship amongst startups. Through Venture Hive, my team was able to find a community of entrepreneurs with whom to collaborate and exchange ideas, and that allowed us to develop relationships with other young tech startups. Venture Hive has also just partnered with Microsoft to host the first US-based Microsoft Innovation Center (MIC) at its facilities. The MIC will be incredibly influential in further stimulating the budding startup environment’s growth, and in generating jobs and investor awareness for the area. And excitingly, the innovation center will specifically target the LatAm community, among others.

The lower costs of operating and living, the fantastic weather, and the convenient access to the rest of the world allows Miami to attract engineers from all over Latin America, Europe and beyond. Such an influx of skilled individuals also serves to create an environment of curiosity and ingenuity due to the fresh eye each brings to the scene — being a newcomer can allow one to see everyday operations in a completely objective way that allows for identifying potential opportunities in a way not possible in the environment one has grown up accustomed to.

And would I give up that fresh way of seeing my environment? Not for one second.

Miami Herald: Message loud and clear: We are one big tech community

Wall Street Journal: Would You Believe It? Miami Has a Real Tech Scene Now

Fernando Cuscuela is an experienced entrepreneur and the co-founder of Everypost (http://everypost.me), the easiest way to post multimedia content across multiple social platforms. Based in Miami, FL. Follow him @everypost