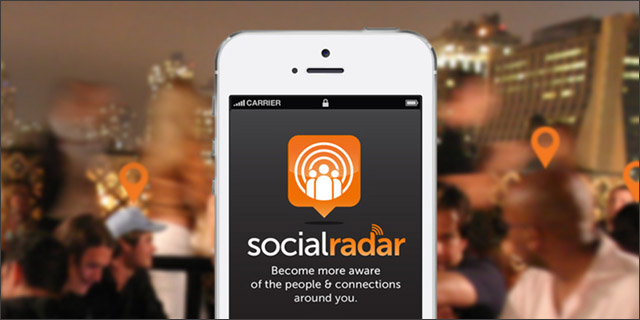 After 15 years at Blackboard, the education company that he grew to over 30 million users, Chasen left in December and founded SocialRadar in April. His team is building an app that will let you walk into a room (or a big conference hall) and “see” who’s there – your friends, acquaintances, and friends of friends.

“We’re really trying to take the amount of online information and make it useful in the offline, physical world,” says Chasen. “If you can solve that, you’ve really created a better-connected society.”

That’s pretty much all the information that Chasen is giving away so far, although we know that SocialRadar is working on apps for iPhone, Android, and Google Glass. Chasen says that the reason for the stealthiness is because the app is still in development, and he wants users to experience it for themselves. That’ll happen in about a month with an early beta, and after the summer for the national launch.

The funding round also included Steve Case, chairman of Startup America; Ted Leonsis, CEO of Monumental Sports & Entertainment; Dave Morin, cofounder and CEO of Path; and others. It seems that Chasen has sold them on his vision, which is producing an app that everyone in the world can use (once they get Internet). 1.1 billion people have smartphones and 2.2 billion have social profiles, he says, but those numbers will jump in the next 10 years.

“I didn’t start Blackboard to raise a lot of money, go public, get rich, or any of those things. I did it because I thought, ‘Wow, this Internet can fundamentally change the way people teach and learn around the world,’” says Chasen. “I wanted to do something that was both disruptive and made a difference, and I actually see the same type of opportunity with this technology.”

SocialRadar might remind you of the darlings of SXSW 2012, Highlight and Banjo. But according to Chasen, they’re “very different.” Both focus on meeting new people, while SocialRadar tackles the more practical problem first: meeting up with people you already know.

These so-called “social discovery” apps were plagued with the problem of battery life; constantly broadcasting your location can drain power quickly. To solve that problem, SocialRadar will let you adjust the accuracy of the location tracking and thus the battery drain. As for privacy, you can change the settings for individual parts of your profile, share only with friends, be anonymous, or even be invisible.

To spread SocialRadar across the globe, the DC company – now just under a dozen people – will use its Series A funding for marketing and developing its iPhone, Android, and Google Glass apps all at once.

“Now is just the right time,” says Chasen. “There’s been enough of a buildup of critical momentum that this type of technology can now become more commonplace.”