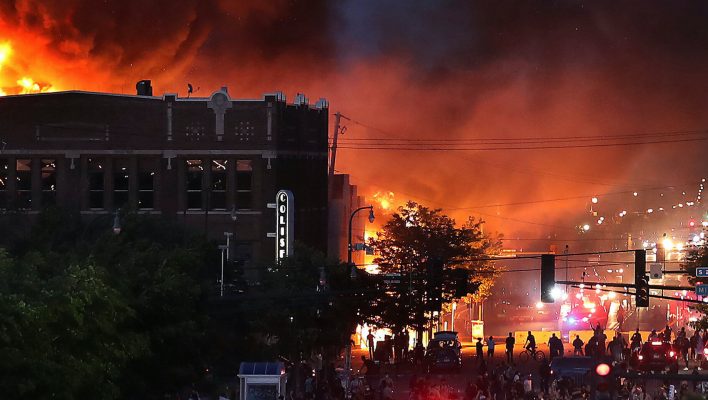 With an entire US city in turmoil and more than 100,000 Americans dead from the coronavirus pandemic, president Donald Trump has picked a dramatic moment for a fight with the social media platforms that helped get him elected.

To say the relationship between Donald Trump and social media has soured over the last few years would be an understatement. After all, the powers behind Twitter and Facebook have been trying to calmly walk the line between free speech and fake news since the election, while the president has opted instead to jump rope with it.

Social media platforms have made the first steps in pushing back against the president when it comes to instances of misinformation. And it's caused an immediate stir in the White House at a time when the country is seized by other crises.

The social media versus Trump fight began with an innocent fact check. During one of his patented Twitter tirades, the president made some less-than-defensible statements about voter fraud via mail-in ballots. This is just one of the many election-focused “problems” Trump has taken aim at during the worst pandemic in more than 100 years.

Rather than turn a blind eye – as the company has done for years – Twitter decided to take a stand against misinformation by labeling these tweets with a disclaimer. Twitter added a line below Trump's original tweet, asking users to “Get the facts about mail-in ballots” before taking the president at his word. 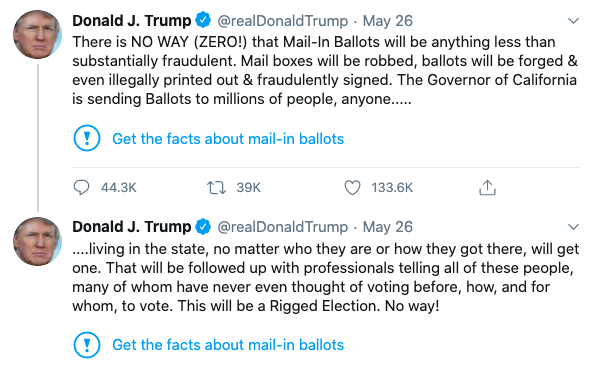 The move might have seemed innocuous to some. Unfortunately, the reality is that fact-checking the president has some pretty serious implications – particularly when we're mere months away from a presidential election.

Other social media companies have taken issue with the strategy:

“I just believe strongly that Facebook shouldn’t be the arbiter of truth of everything that people say online,” said Mark Zuckerberg to Fox News. “Private companies probably shouldn’t be, especially these platform companies, shouldn’t be in the position of doing that.”

Social media's role in political discourse has scarcely left the headlines since 2016, when social media was identified as the primary means by which Russia interfered with the US election. And, while Twitter might not have realized it at the time, this move has accelerated the debate substantially.

As you might imagine, the notoriously thin-skinned president Trump did not take kindly to being publicly fact-checked on his platform of choice. First, Trump was true-to-form, taking to (where else but?) Twitter to complain about the social media giant “censoring” his content on the basis of political bias. His followers descended on unsuspecting Twitter employees, his aides attacked the social media platform on national news stations, and the outrage machine responded in turn. Was that to be the end of it? Not this time.

On Thursday, the president signed an executive order aimed at weakening the legal positions of social media companies. More specifically, the executive order limits the legal protections afforded to social media companies outlined in Section 230 of the Communications Decency Act. This prevents them from being prosecuted for the content posted on their platforms. Many believe this law to be the bedrock of online freedom of speech. But, apparently, the president is done mincing words about these perceived slights.

“When large, powerful social media companies censor opinions with which they disagree, they exercise a dangerous power,” read the order. “They cease functioning as passive bulletin boards, and ought to be viewed and treated as content creators.”

Simply put, Trump wants to treat social media companies as publishers who are responsible for what gets posted and how they respond to it. His argument is that the fact-checking and deletion of patently false and offensive material is akin to politically-motivated censorship.

Social media companies may have differing opinions on the idea of censorship and fact-checking, but their consensus was unilaterally against this executive order.

Even Zuckerberg himself stated in an interview with Fox News that censoring a platform to prevent censorship is “not the right reflex.”

If only the madness had stopped there. Tragically, this social media battle between Trump and Twitter coincided with riots in Minneapolis over the police killing of George Floyd. Protests against Floyd's death, fueled by a video which was recorded and shared on social media, have resulted in burnt-down police precincts, destroyed Target stores, and a truly unsettling air of chaos in a major US city. In response, Trump tweeted… this:

….These THUGS are dishonoring the memory of George Floyd, and I won’t let that happen. Just spoke to Governor Tim Walz and told him that the Military is with him all the way. Any difficulty and we will assume control but, when the looting starts, the shooting starts. Thank you!

There's a lot to unpack there, but the most significant is the president's overt call for violence against American citizens protesting in Minneapolis – an outright violation of Twitter's rules and restrictions. The social media company was more than prepared to drop a content wall on the tweet, warning users about the glorification of violence on the other side.

In one of the most politically-charged games of tag in recent memory, the official White House twitter account attempted to retweet the call for violence multiple times, despite the warning label.

In response to the backlash, Twitter stated that the tweet from president Trump and the White House was removed due to “the glorification of violence based on the historical context of the last line, its connection to violence, and the risk that it could inspire similar actions today.”

The Responsibility of Social Media

From modest college campuses to nearly three billion users worldwide, social media has transformed into an unimaginably powerful engine for free speech in a matter of years.

In 2020, we now know exactly how influential our favorite social media platforms are, and the time for passive observation is over. These platforms have been proven to aid in the spread misinformation – sometimes through the use of bots – and have the capacity to taint the democratic process for the foreseeable future.

The conduct that takes place on social media may well deserve more oversight, but so do the social media companies themselves. Between outrageous data-mining efforts and questionable anti-trust practices, the likes of Facebook and Twitter have been far from ethical when it comes to how they do business. A bit of regulation could go a long way in making these platforms more progressive and less dystopian.

However, Trump's call to “revoke 230” does not mirror that common-sense sentiment. As you might have guessed, this executive order is nothing more than a petulant response to being fact checked for the first time, and legal experts are still debating whether or not the move is anything more than “just noise.”