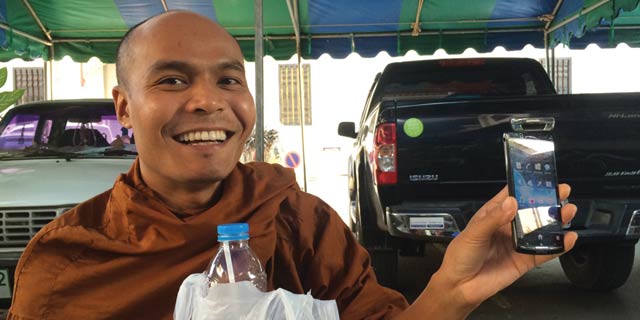 “I love Justin Bieber,” a 29-year-old Buddhist monk tells me, robed in orange, holding up his smartphone. But he thinks listening to Justin Bieber is evil – an example of “craving mind,” a Buddhist mindset of wanting and desire that ultimately leads to pain. Somehow, I (and I suspect millions of others) know exactly what he's talking about.

Some of the monasteries in Chiang Mai, Thailand, offer something called a Monk Chat: you can sit down and talk with a monk about any topic you like, from the meaning of life to (in my case) their use of technology. 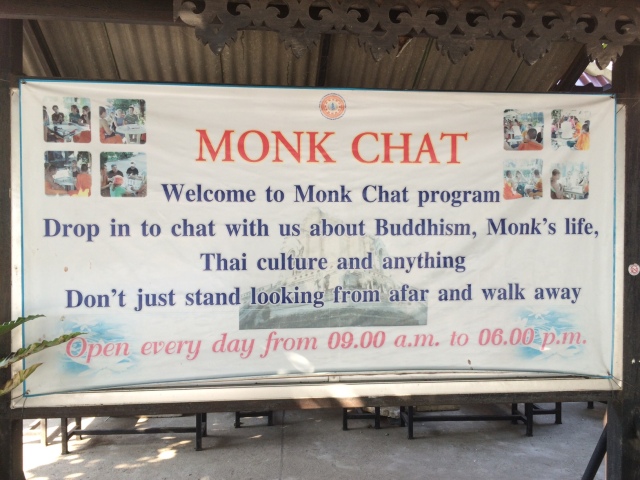 So I met with two monks this weekend – a Justin Bieber lover named Uttama from Myanmar, pictured above, who has been a monk for nine years. And Chertchai, pictured below, who’s 22 and has been a monk for 2.5 years. Chertchai grew up in the Chiang Rai province with no electricity or toilet, but now both of them have wifi in their rooms, Facebook, and smartphones (for Uttama, a Sony Xperian). They tell me most monks have Facebook and phones, and some have laptops. Monks are poor, so any money to buy a laptop would come from their families. 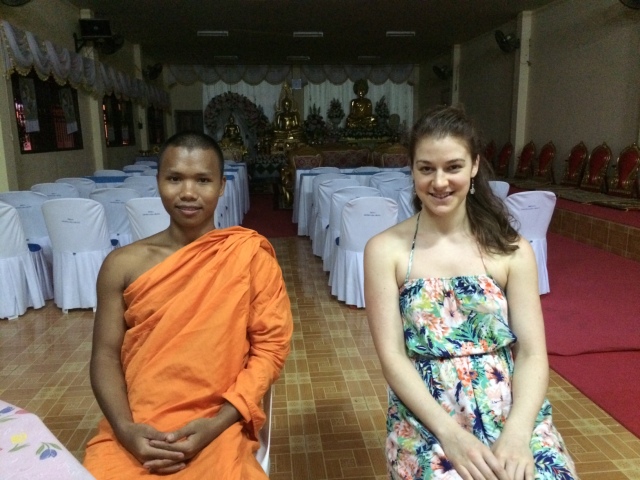 But back to Justin Bieber. Uttama says his lyrics are easy to remember: you listen three or four times and then you’ve got it. That’s helpful in learning English – and that’s good, because his English is barely understandable. (I guess Justin Bieber isn’t the best teacher.)

When you ask Thai monks how they use technology, learning English seems to be one of the most popular and acceptable activities. Uttama has an English-learning app on his phone, alongside apps for Facebook, photos, and more. Uttama and Chertchai both attend university – segregated from the regular students, because they’re not allowed to touch women – and they use the Internet to join Facebook groups for their classes, do research for their homework, and communicate with other students.

Uttama also uses his phone to read the latest news from Myanmar, call his family and friends, and listen to meditation talks on YouTube in the morning.

But not all monks are so surprisingly progressive, of course. Forest monks focus on meditation and are supposed to cut all attachment from the world. Highly respected by the Thai people, they live without technology in the remote wilderness.

In the end, it is a choice that varies among different monasteries and different monks. Buddha didn’t have any rules about technology 2,500 years ago, of course.

When I ask whether our relationship to technology is unhealthy, both monks tell me that everything has two sides, like a coin with two faces. It can be used in good and bad ways. Technology helps us communicate, and it transmits knowledge across cultures and religions – like this article on monastic life, coming to you from Thailand.

But we can also use technology in bad ways. We can be lazy, waste our time, and get angry or depressed. We can while away hours on Facebook that we could be spending enriching and training our minds, a sacred and fundamental practice for Buddhists. Chertchai tells me that when “lady boy” monks sometimes post inappropriate photos on Facebook, they are punished – verbally reprimanded, or sometimes suspended from university.

“Use technologies, don’t let them use you,” says Chertchai. “If you use them, then you are the boss. If they use you, you are the slave” – no matter how pleasurable it is to be the slave.

That helps me understand Uttama, who listens to Justin Bieber even though it's evil. He is not a forest monk; the sole goal of his life is not enlightenment. He is pursuing other things, including education and entertainment, it seems. “You can do as you like for your future, your life,” he says.