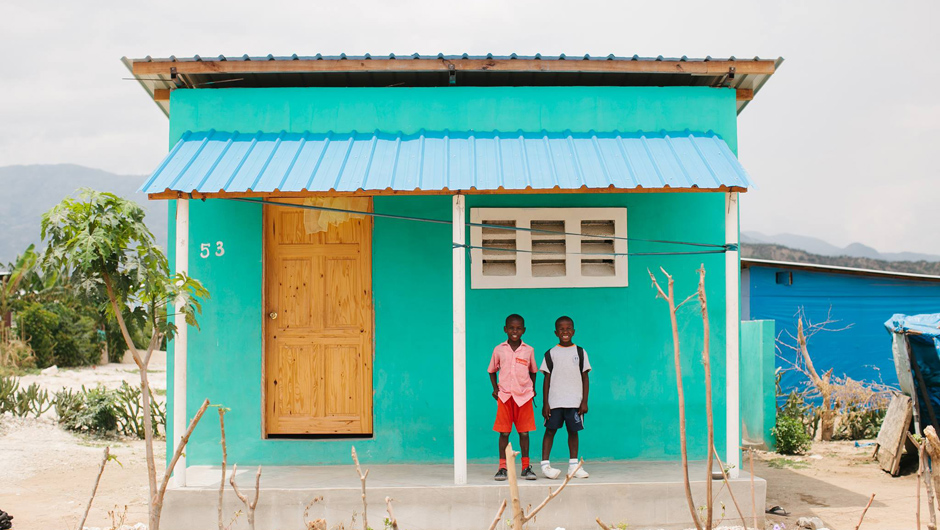 When Brett Hagler went down to Haiti about two years ago, it was the first time he had been directly exposed to the abject poverty of the country. For him, it was a whole different world being there in person versus watching it on TV, or even riding through the streets for that matter.

“I went into the tent slums, into the tents, and talked with a mom and her three kids. I learned that, because they don’t have a safe house, they face sex trafficking, rape, and kidnappings: the kids can’t go to school either. And it was so hot in the tent some of the kids have gone blind,” says Hagler.

As he says, there’s a systematic problem at play that’s the root of all their other problems: lack of a safe home. With a home, kids can go to school, study, sleep comfortably, and parents can work a full day not worrying about leaving their family behind.

“All of these problems, in other words, are solvable,” says Hagler. “Giving these people a home isn’t just providing them shelter: it’s changing the trajectory of their life.”

He was in Haiti because he wanted to help – legitimately help. You see, Hagler was fed up with donating online to help people in Haiti, people he had met face to face. His searches kept leading to websites where, once the money was donated, could have sat in a drawer for all he knew.

Where was the transparency in it all? He didn’t want to donate to a charity that had no real proof the money actually went to help the Haitians.

“I didn’t know who it was going to – pain point one. Pain point two was, if I give $100 how much is actually going to the family? If I wanted to find out I had to search for reports that said how much,” says Hagler. “Pain point three was, if I give at all, what will this actually do – aka, what are the direct results?”

After examining those three pain points, Hagler decided he would simply flip them upside down. What if, instead, people knew exactly who they were giving to, how much of their donation went to the people, and what the direct impact was?

That was the genesis behind New Story, and they build houses for families in need. The partners at New Story screen families experiencing life-threatening homelessness, and donors then fund the cost of building a new home for them. After it’s funded, the new home is built by the partners with the help of the family.

“I think a couple homes into the process, when I started seeing how much people loved the product we built, I realized that it could be a big hit. This is deeply needed in charity and could be applied to almost any vertical in charity,” says Hagler. “We could bring transparency and personal connection into everything we do, and that got me really excited because I know, personally, how much of a pain point that is for donors.”

The best part of New Story’s pseudo-crowdfunding platform is that everything is recorded and sent back to the donors so they can see exactly where every penny went. Not to mention New Story builds a lasting and sustainable relationship to ensure the long term success of the family.

“Once the home is built we take a video of the family on the day they move in and send it back to every single person whether they gave $5 or $500. We want to close that loop and we want our friends to do that too.”

I suppose if you had to sum New Story up in one word it would be transparency: it’s what Hagler craved from day one. He couldn’t find it in other platforms, so he built one that deifies it – and he’s not wrong in doing so.

According to him, if you look at Habitat for Humanity you can’t really put into words how much good they’ve done. However, Hagler thinks they could have a better model.

“We don’t every worry about competition. I don’t want to be the only one doing this, I want to advocate for it: 99.8 percent of charities don’t do it this way, so there’s obviously a lot of room for improvement and we want to be on the forefront of pushing this new model,” Hagler explains.

To date New Story is only about eight months old, but they’ve been able to take that time and squeeze every bit of social good out of it. They’ve been engaged in a campaign called 100 Homes in 100 Days that was started on June 1.

Obviously, the goal is to fund and build 100 different homes in 100 days, and at the time of my interview with Hagler they were 36 for 36. That’s an epic stat right there.

You see, for Hagler and his cofounders it’s not about who can raise the most money or help the most people – helping is simply an moral imperative for them. They want to take it deeper though and build a world class charity that pushes transparency and personal connection as the new status quo: something that’s surprisingly hard to come by in other platforms out there. My hat off to the crew at New Story, you have to give respect where respect is due, and these folks are earning it.