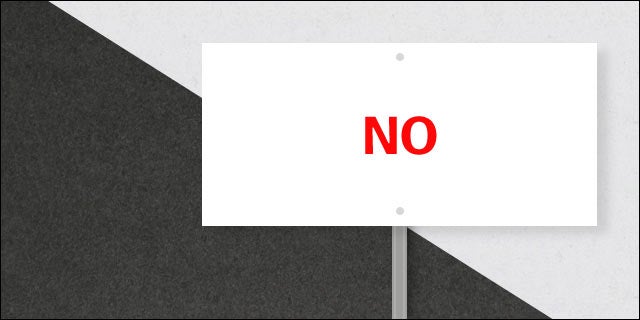 Editor's note: This post was originally published by John O'Leary on the Rising Above blog.

As leaders, we are challenged each day to say “yes” to ever-increasing responsibilities.

In order to be most impactful, effective, and influential as leaders, we must not only master the word “yes,” but also the word “no.” Let me share my favorite example.

Born into a life of privilege, William Borden was destined to take over and lead the family empire of businesses. He graduated from Yale in 1907, but rather than follow the path so clearly orchestrated for him by others, he chose to travel the world as a simple missionary serving the poor. While working in Egypt, he contracted spinal meningitis. Three weeks later he was dead. William was 25.

His belongings were sent to his parents, including the Bible he received after graduating from high school. There were three simple, profound notes in the bible that had guided his life. The first was:

It was William’s reminder to give of himself completely each day. He made this note as he ended one chapter of his life (high school) and began the next (university). Similarly, the second note read:

After committing to a path that would lead him away from the family business and toward the poor of the world, this was William’s mantra. It guided him from a life of luxury toward serving those with the greatest needs.

The final note was dated a few days before his death. Knowing the end was near, he wrote:

There was no turning back on the journey. He knew that he had found his purpose in life and pursued it fully. He remained clear on what was worthy of living for, fighting for, and dying for.

Each day we have the opportunity to build the kind of business we want, relationships we enjoy, and life we desire.

But before we can do this, we must first be clear on what matters most to us, protect it with both arms, and raise our voice with a profoundly simple life mantra:

No Reserves. No Retreats. No Regrets.

When you are clear on what matters most to you and what your roadblocks are, and you have a roadmap boldly guiding you toward your goals, that is when you will build the business, relationships, and life that you want.

This is the first article in a three-part series. Read article #2 Just Say Yes: How Your Personal Mission Statement Will Simplify Business Decisions and #3. 10 Steps to Simplified Decision Making

John O’Leary’s perspective was garnered from a fire that nearly took his life at the age of nine. John is an internationally-acclaimed speaker, inspiring 150+ clients annually such as: Southwest Airlines, The Colorado Rockies, LEGO and Charter. John is the president of Rising Above, a lifestyle organization designed to empower you to take back your life, ignite your possibility and change your world. Beyond inspirational speaking, Rising Above offers live and web-based personal and professional development programs and workshops, DVDs, books and more. Take John’s free Spark! 21 Day Challenge to ignite your possibility today: RisingAbove.com/Spark. John is married to the love of his life, Beth, and they are blessed with four beautiful children. Follow John for daily inspiration: Twitter @RisingAboveJohn and Facebook.com/JohnOLearyRisingAbove.

Expected to die, John O’Leary now teaches others how to truly live. John was burned on 100% of his body in a house fire at age nine. He was given less than one percent chance to survive. The next five months spent in intensive care transformed his life. Instead of ending tragically, the fire gave him the greatest gift: embracing the truth that regardless of our challenges and circumstances, we choose how to navigate adversity, determine our vision for what’s possible and realize the profound impact our lives have on others. Today, 28 years later, John has shared this truth as an internationally-acclaimed speaker, writer and expert on leadership and life with more than 1,000 organizations. Some of John’s clients include: Southwest Airlines, LEGO, Wells Fargo and Young Presidents’ Organization. John is the president of Rising Above, a leadership lifestyle organization designed to encourage you to take back your life, ignite your possibility and change your world. Rising Above offers personal and professional development resources and a community of like-minded individuals. Join the Rising Above community and receive daily inspiration at www.RisingAbove.com.