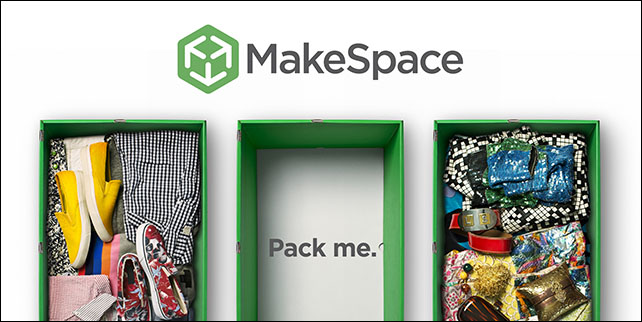 Twenty-four. Yeah, it's the number of hours in a day, but the number also signifies something else. In the United States, the storage industry is estimated to be a $24 billion industry – that's not something to simply brush aside. However, despite the massive size of this industry, self-storage remains in the past, operating on models that no longer fit in with modern values or expectations. MakeSpace, the New York City-based startup focused on providing consumers a contemporary self-storage solution, recently launched nationally to allow people from across the United States to store their items without ever having to make a trip to a storage facility.

“The traditional self-storage experience is arduous, cumbersome and time-consuming,” said founder and CEO Sam Rosen. “In fact, many people avoid storage all together and would rather live with over-cluttered homes, garages and closets. MakeSpace acts as a lifestyle extension. In today's world, we are programmed to expect the constant accessibility of things on any device, at any location, at any time. MakeSpace provides just that and does all the heavy lifting so our customers have more time to do the hundreds of things they would rather be doing.”

Claiming to be the “Cloud storage for physical things”, MakeSpace gives consumers the convenience of storing their items without having to deal with the high costs of traditional self-storage facilities or having to make a trip to facilities themselves. Users of the service simply schedules a delivery via MakeSpace's website or by phone, pack the boxes once they arrive from the company, and then the company ships your items to its storage facility. The company also compiles a visual catalog of the items in each box, allowing users to easily know which box a specific item is located in, removing the issue of having to sort through multiple boxes.

“The self-storage experience has remained untouched for decades. It's an antiquated industry,” said Rosen. “It has always been MakeSpace's goal to revolutionize [this] $24 billion storage industry. More importantly, we reach a customer base that has never used traditional self-storage because of the pain points [in traditional storage]. As a result, we believe we can significantly grow the market opportunity.”

According to Rosen, the current models for self-storage simply don't align with what consumers are looking for. For those who dare to use self-storage, they have to commit to their unit for an extended period of time, end up overpaying for a unit that has too much or too little space, need to purchase boxes separately, and then bring all those filled boxes to a self-storage facility. And because storage units aren't rent-stabilized, consumers end up seeing increases in their bills every few months.

Through MakeSpace's self-storage solution, consumers pay $25 per month for four boxes (plus $6.25 for each additional box), boxes are stored in the company's 24-hour-monitored warehouse facility, and users don't have to make a trip to the storage facility…ever. There's also the added convenience of knowing exactly what items are in each box and the ability to have boxes shipped back to you at any time.

While MakeSpace currently only has one warehouse facility (located in Jersey City, New Jersey), its self-storage solution is available to anyone in the contiguous United States – ensuring that boxes are shipped to and from its facility. Because of the location of this warehouse, a local delivery service is only available in NYC. According to the company, though, they hope to expand this local delivery service to two new cities in the next several months after the settlement of new facilities (including one on the West Coast).

MakeSpace is certainly making huge advancements in innovating the storage space, having raised $10.1 million from the likes of Ashton Kutcher, Upfront Ventures, and the Founders Fund.