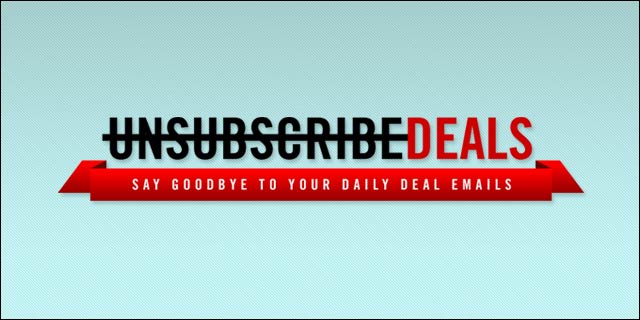 Edwin Hermawan is a recovering attorney.  Lea Pische is a waitress in the West Village (in NYC). Between the two of them, they have 3 startups.

“We actually have a lot of degrees with lots of respectable abbreviations behind us,” they told me.  “Good LinkedIn profiles too. But then 2008 happened and you know what that did to everyone… We still throw really good dinner parties though.”

Their latest startup, UnsubscribeDeals.com, unsubscribes you from your daily deal emails. Just like the name sounds.

As Edwin explained, inboxes are sacred because we all get a ton of emails.  Because he has his phone set to buzz when an email comes in, he said that “every time a daily deal came in, it was like a false alarm and I wanted to kill the deals.  My ESPN digest and fantasy league updates totally got lost.  Basically, I got tired of deleting the daily deals, there are too many of them, we haven’t bought a deal for like 2 years.  We just wanted to clean up our inboxes.“

So they started UnsubscribeDeals just for fun at a Pivotal Labs hackathon.  “We were trying to hijack a Pivotal Labs engineer and find our mythical tech cofounder. All we got were awkward interactions and a random conversation about postgreSQL.”

Instead, they called their favourite Polish front end coder and wrangled a favor from Edwin’s Muay Thai sparring partner (“he happens to be a really good designer that I could never ever afford”) and made UnsubscribeDeals.com.

Their other startups have nothing to do with email.  Edwin’s first startup is Signature Pages, which helps lawyers get all the signatures they need to close transactions, and Lea is working on RunOrder, which helps restaurants order from multiple distributors in one place.

The beauty of this couple’s startups are their simplicity.  All three concepts solve very basic, but very useful, problems – what could be better than clearing email clutter?

When asked where the ideas for their startups came from, they each told me their stories.

Edwin: “During my first year as an attorney, I was at a huge law firm.  During the summer, they promised we’d do all this innovative stuff, but all I did was collect signatures to close transactions.  It was just so mundane, and they bill clients $400/hour to do that.  I thought, there has to be a better way, because this is driving me nuts. I’d get called back into the office at all hours to collect signatures.”

Lea: “I’ve been working at a restaurant for two years, placing orders with distributors after my shift was over.  I’d leave them voicemails, and with my Italian accent, sometimes I’d get tomatoes instead of potatoes.  I thought there had to be a better way, so I decided to fix it.  It’ll be ready in a month or so.”

As for startup life, they love it.  “It’s really nice to create something together. Even with the long hours, late hours, we still love it.  We work harder than we ever thought we would, but it’s nice – we push each other when we need to.”