Since smartphones went mainstream, there has been a healthy debate over which mobile operating system is supreme and more profitable. Typically, the battle revolves around iOS and Android.

Apple is known to be the primary choice for tech startups – Instagram was launched as an iOS app; Lyft and Uber released apps for iPhone users first and the history knows many more examples of companies targeting iPhone users first. The main reason for this is that promoting a new app on Apple Store and getting the initial traction is easier even if the app is paid.

Yet as the new Android N being released later this year for multiple devices, more and more small businesses turn towards the open-source OS from Google. The new OS is rumored to have the same features as the latest iOS including multi-window mode, improved notifications panel and more. Besides, Android users already comprise a larger fraction of the market and getting your app approved and published at Google Play takes a few hours, compared to months on Apple Store.

To determine the right course for your app, ask yourself the following questions first.

What Is My Budget?

While the common opinion is that developing Android apps is cheaper, it’s not always the case. Infinum recently shared some stats from their mobile app development projects, which clearly stated that Android apps require more code, thus are developed slower, and as a result, cost you more.

In any case, when choosing the platform for your app run a quick market survey among your audience to discover, which devices they primarily use.

How Do I Plan to Monetize?

Android users don’t like paying for apps, while iPhone owners spend $35 per year on average on apps and in-app purchases. In fact, Apple iOS generates 85 percent more revenue for app makers and Apple users in general, are deemed more loyal than Android users, who can easily switch to another OS any time. If you plan to launch a paid or freemium app, targeting iOS users first may be easier as they are used to paying for attractive apps.

Yet, Android users have surpassed the 1.4 billion mark in 2015 and the number continues to grow, meaning you have access to a much larger user-base to market your goods too. Typically, e-commerce and gaming apps tend to generate steady revenue for Android.

To build a well-designed app for Mac, you need to own one, as iOS apps must be developed either in Xcode or in Swift, which are currently available only on Macs. Also, it’s just easier to work with a Mac. Unless you already have one, you might want to consider buying one before you start coding. The same is true for your in-house team (if you plan to hire one, rather than outsource development).

Which Market Do I Plan to Target?

Android currently dominates the market share at over 82.8 percent, while Apple sits at modest 13.9 percent. However, Android’s largest user-base comes outside of the US. 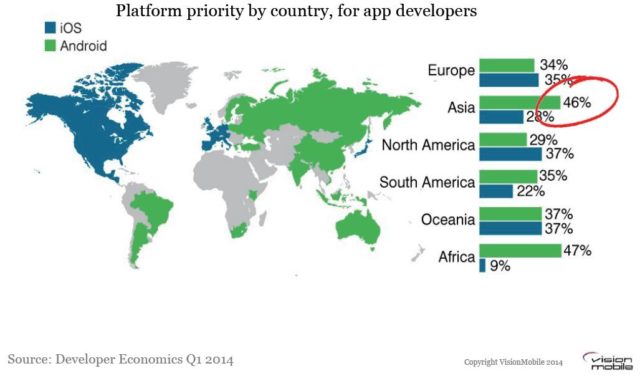 As Android devices come in various price segments and are often relatively cheap, the company has quickly won users in emerging markets in Asia (India, Indonesia in particular) and Latin America.  While US, Europe and Oceania still prefers to pay extra for premium quality that Apple actively promotes.

Which Language and Framework Is More Preferable By Your Developers?

The open-source app development comes with its challenges. Android devices are more variable in screen size and internal device specs compared to iOS devices, which are limited only to iPhone and iPad. Due to this, designing an app for Android is more challenging and time-consuming, Android apps are more prone to bugs and consistent testing is always needed to make sure the app runs smoothly across different devices.

Xcode framework simplifies app development, especially for those, who are not very familiar with coding – but at a premium cost of course. Swift – the newly introduced language by Apple – is still earning popularity among the developers, meaning you may need time to find a suitable candidate for the position.