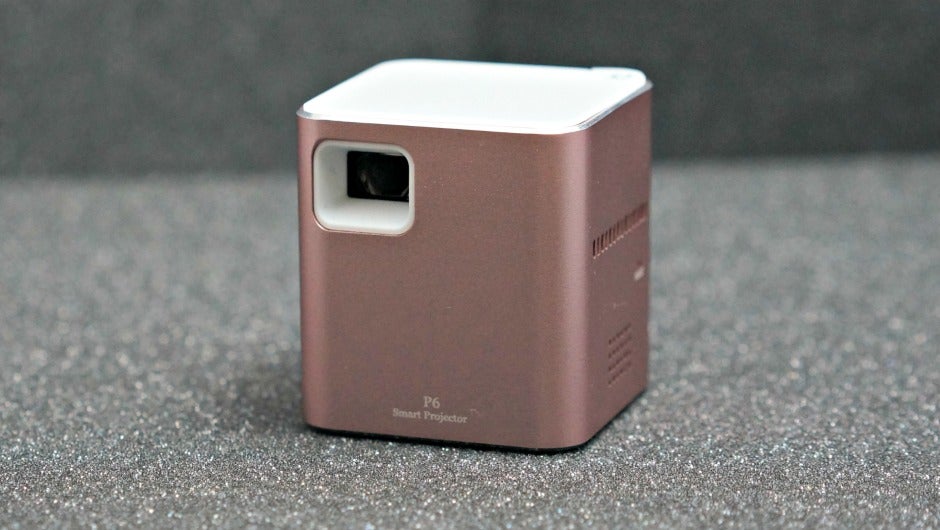 There’s nothing quite like the freedom of being your own boss or freelancer, hopping from coworking space to coffee shop, and creating endless pitch presentations for clients. Unfortunately when you’re a one person shop, that means your office typically travels with you, and that means packing light.

While we all wish there was a magical world where everyone was able to use the same software and hardware for presentations, you’re likely either going to end up in dongle hell, a broken formatting nightmare (don’t forget missing fonts), or a slew of other issues.

Fortunately technology over the years has given us ridiculous tech like the smartphone with a built in projector, also known as the Lenovo Smart Cast, and of course smaller, box sized projectors too. In perhaps an effort to find the holy grail though, we stumbled upon something even more unique, a mini projector. And by mini, it’s more like a micro projector because the P6 Projector is a super tiny cube. Imagine the size of a Chihuahua's head, and that’s about the specs you’ll get from the P6 or maybe even a bit smaller. As such, we got our hands on the mini projector to see if its cute size was all bark or if it was packing some bite. Over the course of a month I tested it on various walls and with various ambient light. 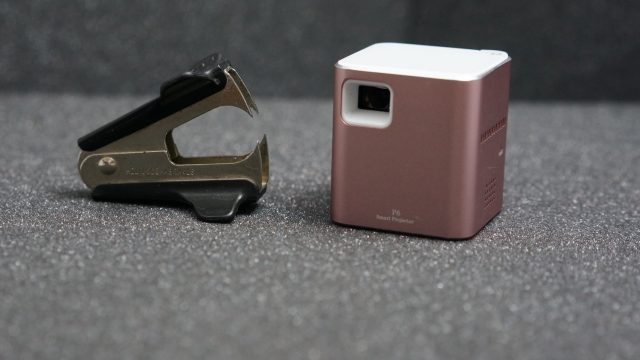 Not only is the P6 small, it’s packed to the brim with features. From what we can tell, the operating system is some form of dumbed down Android system that has been stripped and adapted for a basic touch interface. In short, that means you can connect almost anything to this thing. Once the projector is on you’ll see a basic set of tiles, you simply navigate to the device you want to connect to, and then it will display a tutorial for how to connect to it.

To get started we connected to the iPhone 7, and it was as easy connecting to any wifi mesh network. For iOS there are two options, one where you either connect through your local WiFi, or the other option is to treat the projector like a hotspot and use an OTG connection. It took about four to five minutes to roll through everything, and then the project was quickly able to mirror what was on the iPhone display. There is also a similar process for Android devices, but using a miracast connection.

Like the iPhone, connecting to a Macbook Pro was an easy task. The only difference between the mobile device and the computer is that you can either use the projector to mirror the display or treat it like a second screen. Both worked well in this regard. While we did not test the projector with a Windows device, it does support the OS.

Overall the ease of use on the projector should not cause any trouble for most, but if you hate dealing with WiFi connections you may run into a few bumps. 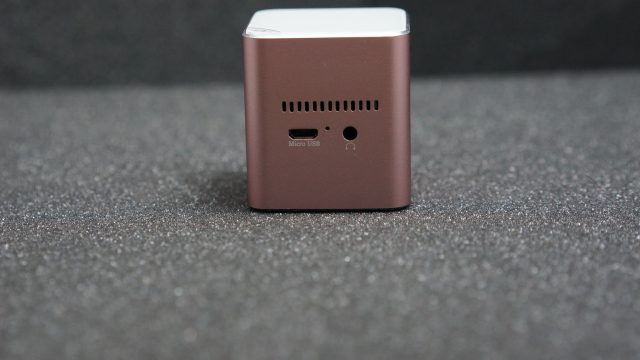 So how does quite possibly the smallest projector pan out as far as functionality? It totally depends on what you use it for. For starters, it does support (this should be in all caps, but I won’t do that to you) 1080 video/resolution; however, it really only has a resolution of 640 x 480. That means 480 or standard definition resolution. Honestly though the output looks much better than that in many cases, just be careful with the marketing on this one. With that said, it looks pretty good for video, solid for images or using as a second screen for your computer, and works great for mirroring your phone display. It more or less sucks when it comes to regular font though, so presentations will be iffy. There is also a really odd issue, which unfortunately I feel is not common among the device because nobody has mentioned it yet, but the display when in focus has a micro-grid system that is pretty noticeable. It’s kind of annoying to look at.

Presentations: Good, but not with heavy text

Overall I was pretty surprised by the output of this little thing, but wouldn’t try to host movie night or present a pitch to someone with it. I did however connect it up to my computer so that I can watch so movies in a hotel room, and that was much nicer than the tiny TV they provided. 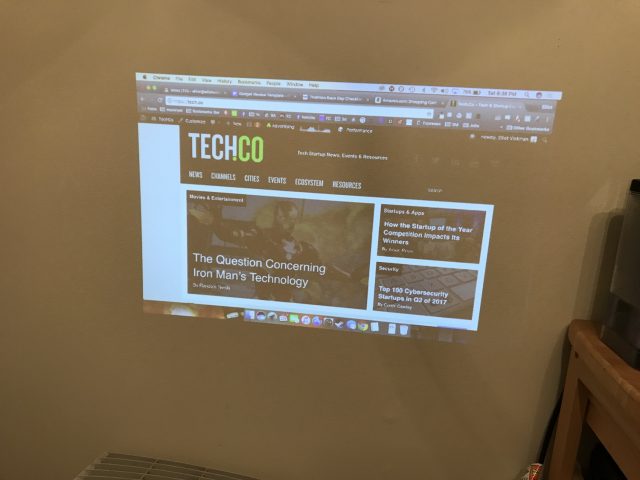 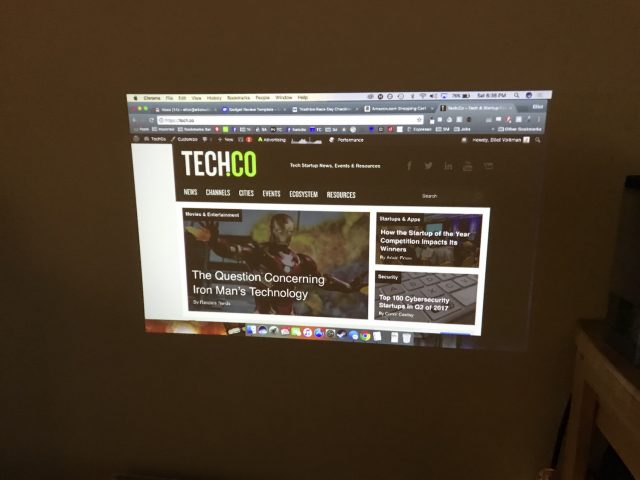 *It's really hard to accurately show the output of a projector in photos, so keep this in mind.

As mentioned before, the native resolution for the P6 is 640 x 480, but it can also project onto a screen of up to 50 – 120 inches (10 feet) or so. For brightness, the P6 pushes out 80 lumens. For a projector that’s not all too much, but considering it’s a super tiny cube there is only so much space for a bulb. When viewing the output on a wall with mild sunlight, you can still see what is being projected, but for the most part you do need a dark room for it to be really useful. As for the battery life, once again this thing surprised me. It will go a solid hour and a half on a full charge due to its 2000mAh lithium-ion battery, and when that runs out you can still use the projector while plugged in. 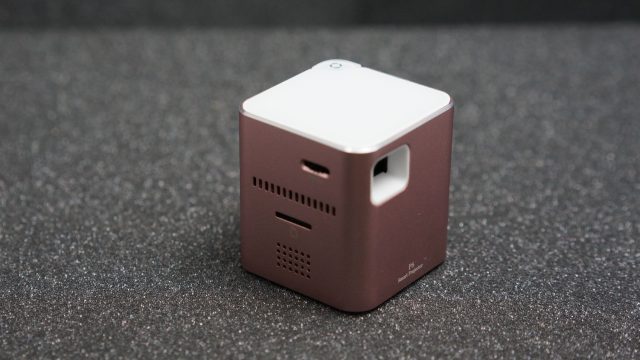 Rose gold, regular black or white, yes, even the P6 Projector is on the trendy color train.  Coming in at all of four ounces and 1.7 x 1.8 x 1.7 inches this thing is just really tiny.

Beyond the size, there are a few design features that are worth pointing out. On the top, besides the physical touch pad, is a standard glass touchpad. From there you’ll be able to select what device you want to connect to, scroll through the media files on an SD card, and setup your wifi connection. The rest of the projector is wrapped in a basic aluminum, contributing to its lightweight. However, between the LED bulb, glass touchpad, and aluminum, you won’t want to drop this thing. I did a few drop tests and it came out ok, but anything more than a few inches and you’re going to see some dings and scuffing. The only other physical button on it is the focus dial, which is also super easy to adjust.

The P6 also comes with a tiny tripod with extendable legs. While it does work well enough, it’s kind of a pain to adjust.

Overall the main attraction on the P6 Projector is its insanely small size. It’s lightweight, easy to toss in your pocket or bag, and takes only a few seconds to setup.

Should you buy the P6 Projector? If you have plans to present a slide deck, images, or video clips without the need for total clarity, totally. This would also double well for a rough second screen for your computer or phone, and also for kids to project videos/games from a tablet onto a wall for larger viewing. However, if you have a slide deck filled with small text or plan on reading from a website, this probably won’t be the best option for you. But with that said, you should also stop creating presentations overflowing with small text anyways, but hey, that’s just me. Jokes aside, this is great for a quick and dirty viewing, but not your suit and tie style presentation.

Overall what the P6 lacks in clarity and decent audio it makes up for in a crazy small package with a surprisingly bright output. It’s good, but not great, so we give it a 3.8 out of 5, and would still recommend it.