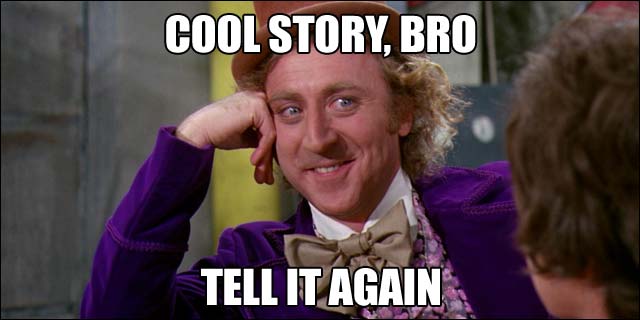 What are your favorite startup myths and tall tales?

But the biggest myth, which is heralded by investors and entrepreneurs alike, is that the best reason to start a company is for passion, not money.

“Do what you love and the money will follow.”

That is the proverbial nonsense spewed at every startup conference, entrepreneurship column, and it's printed on inspirational posters hanging in workspaces. Inc. Magazine, one of the leading publications for the startup industry, even published a tear-jerking article on “How to Turn Your Passion Into a Business.”

Inc. follows the story of Julie Bombacino, the mother of an infant who could not swallow regular food because of a physical condition. Unhappy with feeding her baby formula, she began pureeing foods to feed the infant, which resulted in his increased health. Within three years, Bombacino was able to take the product “insurers are paying for” and turn it into a company that “is disrupting a $4 billion dollar market.” So how did a mother build a company out of her passion to help her sick child? According to Inc., she ticked off the basic business tasks such as “create a business plan,” “hire employees” and “raise funding.” Because when you are truly passionate about something, finding employees and investors is just that easy.

The story leaves out a few interesting points. How did Bombacino receive FDA approval so quickly, if she did so at all? How did she ingratiate herself with the insurance companies that have always been opaque and insulated against small, outside companies? “This is a very worrisome story,” says Arindam Nag, a former editor of Dow Jones. “I don’t think I have ever heard of a new company in this space that has been able to make so many moves so quickly.”

Inc. isn’t the only publication to cover this utopian fallacy. Carmine Gallo, the author of The Innovation Secrets of Steve Jobs, claims in his Forbes article that one of Jobs’ principles of success was “do what you love.” It was supposedly his passion that made Apple a multi-billion dollar technology company. This is a bizarre statement for someone with an alleged knowledge of Steve Jobs to claim. Steve Jobs was not passionate about technology.

Steve Jobs, as chronicled in his namesake biography by Walter Isaacson, did not have a dying passion for technology. He did have a passion for freedom, creativity, and spirituality. Jobs traveled India in search of spiritual enlightenment and dropped out of college, opting instead to audit only the classes he found interesting. Eventually, he found a job working the night shift at Atari because it gave him the independence he wanted and the paycheck he needed. Then, Steve Wozniak came along.
Steve Wozniak, the technical, practical and actual brain behind Apple, provided the passion that fueled Jobs’ success. Wozniak designed his own version of the classic Pong game that Jobs used to land his job at Atari. Wozniak reduced the number of chips in another game to net Jobs a $5,000 payday. Wozniak created the “blue boxes” that provided free long-distance calling, which Jobs then sold. And Wozniak continuously pushed technological boundaries to develop the products that launched Apple as a groundbreaking company and Jobs as a visionary. Meanwhile, Steve Jobs was a glorified salesman.

Steve Jobs was not passionate about technology when he started Apple. It wasn’t until decades later that he was renowned as a passionate leader — passionate for building one of the most profitable corporations in the world. He is not alone in this passion. It can hardly be believed that leaders of companies that manage franchises, sell socks or provide accounting services are truly passionate about their work, as the startup industry believes. Rather, these founders and CEOs are passionate about building a strong company, something measured by its bank account.

Passion can lead to success, as long as your passion is money.