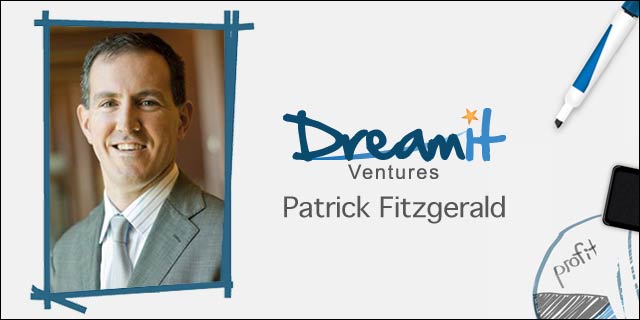 Patrick Fitzgerald wears many hats — he's an entrepreneur, teaches entrepreneurship at the Wharton School at the University of Pennsylvania, and is the managing director at DreamIt Ventures Philly.

“I have been an advisor on the side for a while at DreamIt,” says Fitzgerald. “When they asked me to get on board to run the Philly cycle I jumped at the chance because I loved advising one company, but wanted to get involved with all 12 companies.”

Part of Fitzgerald's new role during the 90-day program is to set up each of the teams with a mentor.

“I will also pair you up with a mentor that does one of two things. One has been in your industry before or fills a gap for you. Do you need tech talent, marketing,  or a strategic person on board?” says Fitzgerald. “This lets you try to fill that gap with a mentor; hopefully they can do both or maybe they can’t.”

Fitzgerald has all of this expertise because he's had successful businesses in the past. He attended UPenn as an undergrad and later went to law school at Fordham University. His great ideas aren't only attributed to his education, but his ability to recognize opportunities.

When he lived in New York City, he had an idea that would give people an incentive to recycle – he created Recyclebank which gives rewards to people and households that recycle. The company also partnered with Target, Whole Foods, Home Depot and other retailers. He is the co-founder and former president of Recycle Bank, according to his bio.

But his passion for building companies didn't stop there.

“I wanted to build a vending machine company for parents on the go called Nanny Caddy and that reached 40 something odd units around the country and in LEGOLAND, SeaWorld, and the Bronx Zoo,” says Fitzgerald. “It has everything from diapers and wipes to pacifiers and sippy cups.”

Fitzgerald says his parents were teachers and didn't come from a well-to-do background, but because of his passion, drive, and hard work, he is successful.

“Nothing in the startup world was handed to me,” says Fitzgerald. “It was by sheer will and tenacity so I want to get that across to these companies that no matter where you come from, no matter what you're working on, if you push hard enough you can make it happen.”