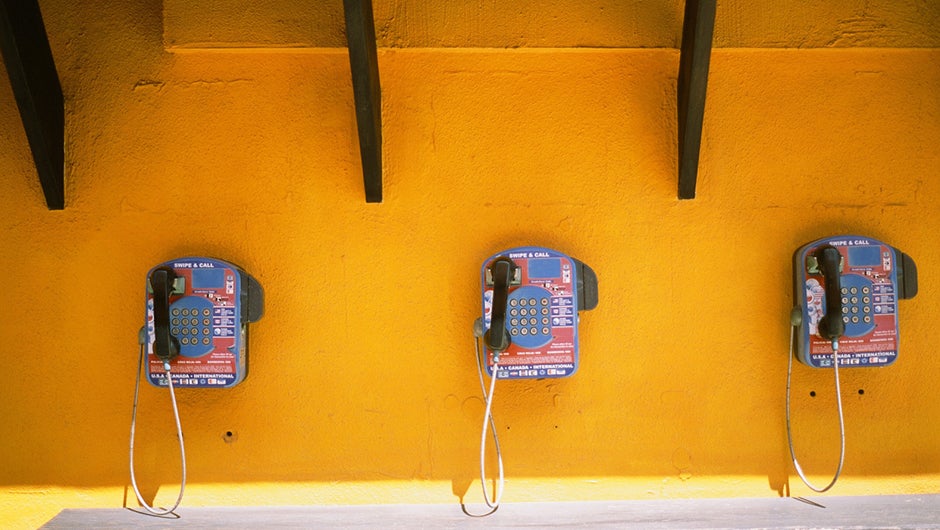 We live in a world that shrinks with every passing year.

Technological developments in digital devices and communication have resulted in a permanently connected population. You can talk to business clients on the other side of the world, send messages to friends on different continents or simply call your mother to check in at any time of day.

It’s a shift the general populace has embraced. Look around yourself next time you’re in a public place and see how long it takes the average person to sneak a quick glance at their phone. It won’t be long.

But that’s no surprise. What is surprising is how the use of these devices has evolved. The most popular mobile device is the smartphone, a device whose primary function is to call and have a verbal conversation with another person.

Instead, we now use these devices for pretty much everything except calling others. Talking on the phone is slowly becoming a rarity. We prefer to send emails or instant messages and it’s no surprise why.

There’s an app for it

Think about the number of apps you have on your phone and how many of them are aimed at verbal communication. Most of us will only have two options, the first being your primary call function with the second your FaceTime or Skype app that allow video chats – not pure voice messaging, if you ask me.

There’s a huge gap in the market for advanced and evolved phone call apps. Instant messaging, chat, and email, on the other hand, are extremely well covered. With apps like WhatsApp, Facebook Messenger, Viber, and Gmail, we’re able to stay connected anywhere as long as we have either a network connection or a WiFi signal.

These apps have evolved to offer incredibly hassle-free methods of communication. It’s no wonder the traditional phone call can’t keep up when the only real development worthy of note, the inclusion of video, does little to streamline the process.

Take the record-setting WhatsApp that was acquired by Facebook in 2014 for instance. WhatsApp’s monthly active user base grew by 300% in a matter of just two years – from 200 million users in 2013 to 800 million users in 2015. Research by the CMO Council suggests that the number of people who will use instant messaging is set to touch 1.4 billion by 2016.

All of these figures probably mean the art of making a phone call is dying a rapid and definitive death.

Is there a problem?

Developments in email, chat, and instant messaging have made text-based communications extremely efficient. You can provide replies at a time that suits you, and you even get read receipts. You also have a copy of correspondence to refer to, so you can reply in situations where a phone call isn’t suitable.

But there’s a greater probability to cause misunderstandings. Text lacks tone and personality; I’m sure we’ve all received and sent messages that have been misconstrued, causing what should have been an avoidable issue.

Misunderstanding tone isn’t a huge problem in a personal relationship, but when it comes to business, a misunderstanding could cost a new client or contract. Despite all the developments in text based apps and services, there’s no substitute for the personal touch a verbal conversation provides.

It’s a well-documented fact, and according to Salesforce, a prospecting campaign utilizing phone calls delivered an 8.21% response rate dwarfing the 0.03% of email marketing.

It’s easy to quote a few studies and say that calling is far superior, but it does not detract from the fact that, right now, text-based communication in all its varied avatars is riding a huge popularity wave. It’s only natural when you look into the amount of development and attention the area has received.

Change is on the horizon

There have been few developments in the world of phone calls in recent years. However, it seems that a number of companies are trying to address certain problems and bring the selection of features for traditional phone communication up to par with that of its instant messaging based counterparts.

Large telecoms companies in the UK are addressing the issue of using WiFi to make calls.

Three and O2 have included their own apps to allow WiFi-based calling. This should prevent dropped calls when you’re in a poor signal area, but of course requires a WiFi signal. The problem with this service is that all WiFi calling is handled through an independent, non-integrated app. It’s a minor issue in the grand scheme of things but proves annoying when you don’t have a consolidated list of calls made, received and missed.

EE has a similar service that doesn’t require an app and will automatically shift between network and WiFi usage depending on what’s available.

These services, taken together, are a great step in the right direction, but it’s a small step. There’s still a huge gap between the developments that text-based and call-based communication have seen.

However, there are also a few different app development projects that look quite promising.

There are a handful of companies addressing the development dearth in the phone call development.

One of the more interesting calling apps is Yallo. It offers services that add value to the voice call, such as voicemail transcription, dropped call prevention and call prioritization. What’s interesting are the features. There’s the ability to record and save calls to listen to later, easy group calling, and a nifty little feature that allows the caller to provide a caption, letting the receiver know what you want to talk about even before they say “hello.”

Professionals and entrepreneurs can also benefit from having separate lines on their smartphone. Grasshopper is a notable app that helps virtually manage your phone lines and create a second business line on your own phone. It allows you to use a separate business number, voicemail transcription and an ability to read faxes.

Whitepages Caller ID also solves a number of problems by including caller ID display for those not in your phone book, spam protection and social media integration.

However, a lot of these services simply link your phone to other services and aren’t really pushing the boundaries of what we expect from a phone call. It seems as though Yallo is taking the next step in producing a more evolved calling experience. They aim to solve many of the problems and address the shortcomings of phone calls vis-à-vis instant messaging, chat, and video calling apps.

The likelihood of verbal communication one day being completely forgotten is slim. There’s still no other method that is as effective at opening a dialogue or getting a quick response. However, it’s going to be an uphill battle to bring it back to prominence over the popular chat and IM trend – a battle that needs more innovation and a closer look not just at how we can streamline the process. The question is how phone calls can evolve to the next level.