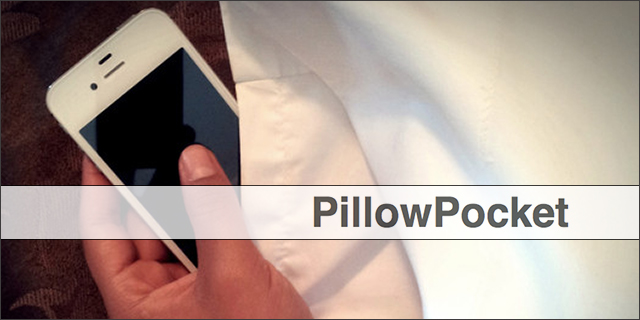 Yes, boys and girls, it’s the thing you’ve always wanted: the PillowPocket, a pillow … with a pocket.

This $9.95 white pillowcase has a 6” by 4” pocket that’s designed to hold your smartphone. Velcro seals the pocket shut, so you can sleep peacefully on the 100 percent Egyptian cotton, 300 thread-count fabric. PillowPocket recommends using apps like Proactive Sleep, Sigmund, and Deep Sleep Aid to track and enhance your slumber.

On a serious note, if you’re worried about cell phone radiation, you might not want to buy this pillowcase. Amit Lubovsky of tawkon recommends not sleeping with your phone near your head to reduce exposure. PillowPocket founder Chad Riddersen counters that the harms of cell phone radiation aren’t established – and he’s also working on a PocketSheet.

In fact, he has worked on two other versions, as well. When one user put a fragrant bar of soap in her PillowPocket to fall asleep, Riddersen got the idea for the AromaPocket. And before that, there was the CondomPocket.

“That’s our frat boy use case, we got our entrepreneur/frustrated banker use case, and then we got the tired mothers of the world use case,” says Riddersen, who used to be a sleep-deprived banking analyst himself.

All this may seem a bit “As Seen on TV” silly, but Riddersen has a serious, long-term goal: to help people solve their sleep problems.

He says, “The phone, it’s great, it’s cute, and it’s fun to pursue, but it’s actually led us to this massive problem of sleep deprivation – 30+ million Americans that suffer from insomnia – and so that is our market.”