Once upon a time, in the land of commercial advertising, 30 seconds of persuasion, art, and/or deception was the recipe in trying to win over a prospective customer's business. In television and radio's infancy stages, this proved to be an excellent return on investment. At that time, when the concept of motion picture was still a novelty, consumers were not only willing to sit through Pepsi's elevator pitch on why you should drink their cola, but they were actively engaged, enjoying the entertainment.

Throughout the years, however, advertising went from a novel byproduct of entertainment to a virus that consumed it. As the relative cost of advertising decreased, the percentage of businesses who bought into it increased. As the number of channels and shows available increased, the percentage of time dedicated to non-sponsored programming decreased. As the consumers attention span during a commercial decreased, the prevalence of unethical brainwashing tactics increased. Eventually the lines between advertising and entertainment completely evaporated with the use of product placement and brand sponsoring.

And then technology started to work in the consumers' favor. The advent of the DVR brought viewers the option to filter out much of the advertising, a luxury most were happy to pay for. Free streaming video websites such as Justin TV, UStream, and a host of rotating smaller scale services began to appear. Netflix, the DVD delivery service, started to include commercial-free online movie and television streaming. Even Hulu, run by the likes of Fox, NBC, and ABC, knew that in order to compete with these other services, even they would have to scale back on ads.

One consequence of reduced advertising exposure is that a businesses' marketing efforts would go for broke in terms of generating purchasing intent, right?  Wrong.

Mass adoption of search engines. Google brought us instant gratification in terms of information gathering. Instead of relying on memory, the yellow pages, or advertising, a consumer could quickly use their preferred search engine to decide where their dinner was going to be purchased that night.

However, as the consumer adapts so too does the business. An entire industry, search engine optimization, emerged in response to the accelerated use of search engines. At one time, simply having a website might have been enough to put a business ahead of the game.  Now, if a website is not one of the first few results of its targeted keywords, it's as if the company doesn't exist. Businesses have decoded search engine's algorithms and through practices such as link building , are now buying their way to your eyes.

Although search engines provided great advancement in terms of user empowerment, there still existed a leap of faith in terms of a source's credibility.

Mass adoption of social media. Trust, very possibly search engines' greatest weakness, has become social media's greatest strength. As sites like Facebook and Twitter grow more mainstream, our online social networks become a more accurate representation of our actual social networks. In fact, as social media grows in numbers, strength and importance, not only have the lines between the two begun to blur, but social media becomes a catalyst for face-to-face social interaction, as evidenced through sites such as Meetup.com. Not only is Twitter maintaining your real social network, it's very likely expanding it.

As our online community grows, so too does our database of trustworthy resources. Before social media, if you needed a recommendation for which resort to stay at on your “business trip” to Hawaii, likely your best resource was to take the word of a handful of travel review websites. Very possibly these reviews were legitimate, although there always lingers the chance that the praise has been purchased. Today, you're merely a Facebook post or tweet away from gathering input from a long lost friend, former classmate, or introverted colleague that you would otherwise not turn to. While these opinions might not carry as much weight as that of a close relative or life-long friend, it's certainly an upgrade over the unknown blog or advertisement. Your colleague has nothing to gain from deceiving you.

So, if the current state of affairs is a marketplace of information between friends, how can businesses get their message heard?

Be conversation worthy. Unfortunately, reporting to the CEO that your company needs to be “conversation worthy”, may very likely result in immediate termination. To break it down a little more concretely, in order effectively enter into a user's social media sphere, one tactic has proven to stand above the rest.

And, little did you know, this particular social media tactic was something you picked up in your Psychology 101 course – positive reinforcement. Just like Pavlov conditioned his dogs to salivate on command, a business can utilize positive reinforcement to encourage word of mouth. Although achieving this praise is not as simple as ringing a bell, businesses don't have to go about reinventing the wheel either. Stick with what works: free.

In his book Predictably Irrational, Dan Ariely emphasizes the power of free.

In one study we offered students a Lindt Truffle for 26 cents and a Hershey’s Kiss for 1 cent and observed the buying behavior: 40 percent went with the truffle and 40 percent with the Kiss. When we dropped the price of both chocolates by just 1 cent, we observed that suddenly 90 percent of participants opted for the free Kiss, even though the relative price between the two was the same…Then we tried lowering the price from 2 cents to one cent on the Kiss to see if we observed that same level of increase in demand in the Kiss. We didn’t. (Source: DanAriely.com)

Using free as the stimulus to create a response of positive brand mentions is something that has been used with great frequency in social media, especially Twitter. If you've seen any “RT and follow to win [insert prize]” promotion, you know what I'm talking about. This particular formula, although sometimes effective, creates two problems. First, it has been used so regularly that it doesn't exactly stand out any more. If the prize is enticing enough to help achieve your end goal, then any business can live with that. The second problem, which is more limiting than the first, is that the response is inherently not organic. In other words, the social media sphere is all too aware that the business is the one pulling the strings. The user is blindly chasing the carrot; there's no genuine recommendation occurring.

So how can a business leverage the power of free to generate goodwill without overtly asking for it?

Take a lesson from Tony Hsieh's company. Zappos, an online shoe retailer that has grown to dominate its niche, has achieved its success through excellent customer service. An inherent characteristic to quality customer service is going above and beyond a buyer's expectations. Often times this can require doing things for free, especially in opposition to a stated policy. Many are already familiar with the story of one Zappos representative sending flowers to a grieving customer after the loss of her mother. The recipient was so touched by the company's good deed that she later exclaimed on her  blog:

“IF YOU BUY SHOES ONLINE, GET THEM FROM ZAPPOS. With hearts like theirs, you know they’re good to do business with.”

Of course, if every customer interaction resulted a free bouquet of flowers, as heart warming as it would be, the result would decimate the bottom line.  Fortunately, it doesn't require a dozen roses to receive positive mention.  I know this first hand.

After recently buying a pair of shoes from Zappos, I had been granted with a surprise gift. 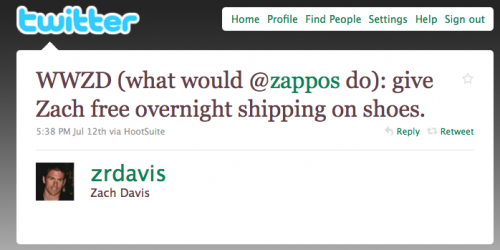 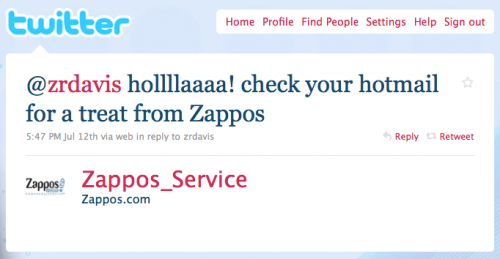 That additional “treat from Zappos” was free overnight shipping for any purchases in the future. I of course went onto sing the praises of Zappos to my “extensive” network of 230 followers.

Let's break down this transaction from a psychological stand point…

Condition: Zach tells all his friends how great Zappos is (positive brand mention)

The value of mentions like these far exceed the common retweet and follow promotions in terms of boosting brand equity. Now that social media is where people turn to gather recommendations on which products and services to buy, the importance of word-of-mouth becomes compounded. And because of this, businesses need to be willing to allocate some of their marketing budget not only to creative social media minds, but also the sources of free goods and services to carry this new model of marketing. The long term goodwill will eventually outweigh the increase in promotional spending. It's also important these good deeds are genuine, which means to not ask for anything in return. Eventually, prospective customers will turn into customers, customers will turn into endorsers, and endorses become fanatics (see: Apple).

Of course, there's no single blueprint to be used by every company. In order to achieve social media success, the approach will vary depending on the audience, product, and company culture. Although free has been proven successful time and time again, it's not a one-size-fits-all approach. What every company will need is clear goal setting, flexibility, and an abundance of creativity. If done with due diligence, the dark, foreign realm known as social media will become your greatest marketing asset.

And if all else fails, Retweet and Follow to win an iPad.

Editor’s Note: Zach Davis is an independent Internet marketer and consultant with a specialty in social media marketing, creative content production, and branding.  He has a BBA in Marketing from the Wisconsin School of Business and currently works and lives in San Diego, CA.  You can find Zach’s personal website at zrdavis.com or follow him on twitter @zrdavis.