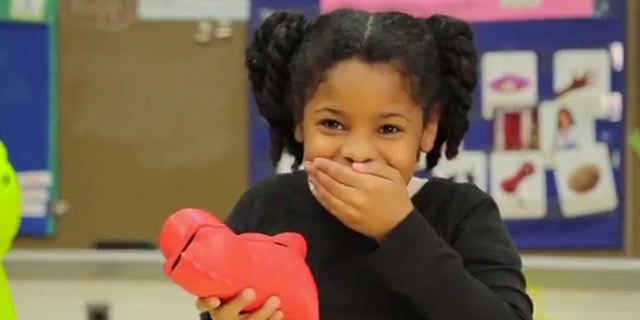 A 1-foot-tall plastic dinosaur is coming to interact with your kids, and it will be as smart as IBM’s Watson.

New York City-based startup Elemental Path announced today a Kickstarter campaign  for its first “cognitive toy.” The $100 Green CogniToy Dino allows kids to directly engage in intelligent conversation with their toys. That's because under its soft green skin, the CogniToy is powered by Watson, IBM’s cognitive computing and natural language processing technology. The technology allows toys to listen, speak and simultaneously evolve, learn and grow with a child.  It's Barney‘s smarter cousin, way smarter, since we all know that Barney wouldn't be able to win Jeopardy.

The team behind Elemental Path is one of the winners of IBM’s Watson Mobile Developer Challenge. The company uploaded its own knowledge bases for Watson to search, to ensure that the CogniToy produces answers appropriate for kids ages 4 to 7. It asks and answers questions, tells knock-knock jokes and even remembers the child's name.

CogniToy works by pressing a button on its belly and asking it questions. The toy connects via Wi-Fi to the Watson servers, looks up the answer, and responds. CogniToy can also quiz your kids, pay attention to their answers, and evolve over time as they demonstrate improved math and language skills.

According to the company, they saw a need in the market for smart educational toys. As of now the technology can identify only one child at a time. But according to Yahoo News, Elemental Path hopes to be able to identify different kids by their voice and adapt to each, says co-founder Donald Coolidge.

The goal of the Kickstarter campaign is to raise $50,000. If it’s successful, Elemental Path hopes to begin shipping product to early backers in the fall.

Sure, CogniToy is smart, but no dinosaur will be as cool as the Sinclair family in the 90's hit Dinosaurs. There, I said it!