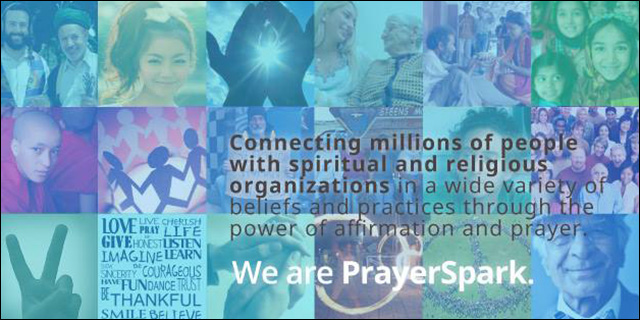 Michael Feder was watching the news scroll when Nelson Mandela went into the hospital about a year and a half ago: “We appeal to the people of South Africa and the world to pray for our beloved Madiba and his family,” came the plea. In that moment, Feder thought back to a little-known series of studies performed at Duke University: both Mantra and Mantra II findings, despite reports that may have suggested otherwise, actually showed that those hospital patients who had prayers said for them did not fare any better than those who had intercessions made on their behalf.

How the World Prays

Feder was deeply interested in this subject because years earlier, he had been tapped by Isaac Tigrett to bring together the art concept for the House of Blues: rock ‘n roll infused with spirituality. He became well-versed in the understanding of how people around the world practice spirituality and trust in prayer. And on top of these studies showing that anonymous prayer doesn't work, Feder was aware of another phenomenon: when querying deeply religious people who pray for the sick within their own congregations, he says, “the peer pressure to get better creates stress that actually prevent these patients from improving their health.”

So, how could he help Nelson Mandela? How could he help other people who are hurting around the world, or simply in need of spiritual inspiration, in an effective way – even if only as a placebo? “If prayer is a placebo effect, if it takes effect, then that's wonderful!”

PrayerSpark provides free prayers, affirmations, and intercessions from an extremely curated group of spiritual practitioners who are:

And why, with all of these “prayer doesn't work” studies, does PrayerSpark offer this platform? “What if there is no feedback loop?” Says Feder. “What if others are praying for you, even without the personal connection? I believe we have a great global interfaith opportunity to support the scientific notion [that knowing someone is praying for you, but not feeling the pressure to perform, will bring widespread healing and health.]” The prayer requests are free, but there are fees associated with receiving the prayer in a postcard, greeting card, or other form. According to Feder, 82% of the gross revenue is returned to the spiritual practitioner to further their charitable endeavors.

The Rise of the Nones

The percentage of people who claim no religious affiliation, but feel spiritually motivated, is steadily rising, and this segment of the population is referred to as “The Nones.” This is the underserved market that PrayerSpark looks to address. According to the website, “Priests, Shaman, Spiritual Guides, Yogis, Rabbis, Monks… PrayerSpark gathers together a world of faiths and cultures for you to explore and share.” These curated practitioners include Buddhist monks in India, an Australian Aboriginal leader, and Peggy Wellknown Buffalo, leading traditional healer honored by the Dalai Lama.

According to Feder, “Peggy Wellknown Buffalo was honored by the Dali Lama this year as one of 51 points of light in the world and who is bringing needed hope to 1st Nation causes.” Buffalo is a notable member of the Crow Tribe of Montana and her cause, The Center Pole, promotes knowledge, justice and sovereignty in Native Communities.

Plans for the Future

Exciting plans for the future of PrayerSpark include a SparkFest event to gather people for celebration and inspiration, and the development of an API to allow other brands to provide these curated prayers to their own customers. For instance, Etsy crafts could come with personalized incantations from spiritual leaders, mantras by yogis, or blessings of the earth from a traditional healer like Wellknown Buffalo.

Connect with PrayerSpark on Facebook to extend your spiritual network, and check out the site to request a prayer.