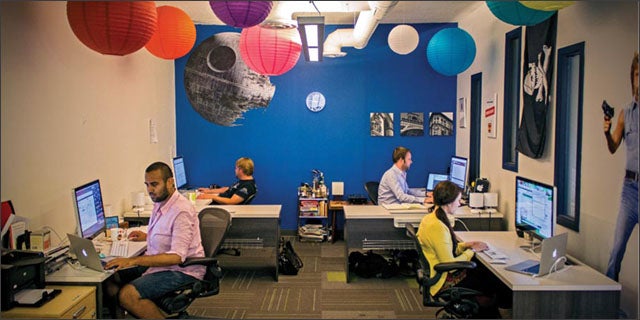 Sitting in a marketing organization inside of one of the largest corporations on the planet, I take part in a lot of discussions on how to sell to people, or “market” to them.

As a relatively unschooled person in the land of marketing – I did not take business classes, and I am not formally trained in marketing – I have personally struggled through professional life in certain areas, trying to understand how marketing people see the world of the consumer and the product.

My best guess at this is the following:

Here’s where I end up feeling very awkward, because when I think about my own buying behavior, I think about the times in my life that I really wanted to buy a tech product, or a car, or clothes. I honestly don’t believe I sat down and considered the marketing messages of the product being sold to me.

Products are not reasons in themselves to buy. There are millions of smartphones out there.

They all kind of do the same thing, some do some things better, some do not. But the real difference between any of them is infinitesimal if you could measure it.

Rare is the woman sitting at a kitchen table eating eggs thinking to herself, “When are they going to come out with a 13.2 megapixel camera?” Rare is the chance that she opens up a browser window and sees a tech blog about that issue.

Everyone is trying to sell to the early adopter. There are no more early adopters anymore. Tech is so relatively cheap and easy to ship that almost all of the marketable merchandise is in the market by the time you have said, “Plug in.”

Consumers – or let’s just call them people – think about their own internal struggles, and they actually live in a world where they are not thinking about your product 18 hours a day. They are also living in an environment where the role played by media is eroding, as it becomes more expensive to create media, journalism, and news.

It’s likely that in this environment there is an opportunity for brands to step in, for marketers to act like journalists and be the stewards of the culture and the communities that do the purchasing. Why? Because at the end of the day, consumers – people – need information to feed their emotional choices.

There’s a guy named Clayton Christensen; he teaches at Harvard Business School. He came up with something called “Jobs-to-be-Done” thinking. In that kind of thinking, based strongly on IDEO’s design thinking, he suggests that consumers make choices, not about a brand or a product, but about something they are struggling with. They “choose” a product based on their own personal dynamics. Someone may like a phone or a tablet not because of the feature, but because of how they felt about why they used it.

This is hard for product marketers to stomach, I think, because marketing people are really intelligent, but it’s very hard to know why someone does something. It is easier to stick to broad brush strokes that trigger generalized feelings or conditions: anxiety, fear of missing out, ego, seduction.

I’m pretty sure it was easy to do this back in the days of TV, radio, and magazines. They don’t allow a space for someone to talk back. TV, radio, and print were like narcissists. At the end of the day, they were speaking at you, and it was really all about them – subscription revenue, advertising dollars. Product marketing got put in a system where everyone had their slice of the deal, their pound of flesh. Consumers actually lost out. They were given information, they went and they bought, but then that was it. You had to wait till the next product launch to hear from the brand again.

There’s no chance for a relationship in a narcissistic environment.

And there is also little information left for the marketer, too, because their only way of getting information is to make surveys that collect what the consumer knows.

Only problem with that is that survey questions always confirm the sentiments of the survey questioner. Using the relationship analogy, this is like being on a date and someone asking, as they meet you for the first time, tell me a little bit more about me.

The problem with asking someone what they know about you, and how they compare you to someone else, is that — kind of with the Eisenberg Principle — the answer the consumer will give the marketer will have its biggest impact if it looks like something the marketer already knows.

There’s a scene in Community, where they go to a focus group, and one of the guys taking the survey starts telling the marketing folks what they want to hear. What they produce out of that is a TV show that looks horrible to one of their biggest fans.

What you have to do instead – and this is what I am doing at Microsoft in our BizSpark group, which provides free software licenses for startups – is help people build stories of their own experience. Markets are, after all, communities, and communities come together through stories.

Journalists get this. I am a former journalist – full disclosure. We get out of the way. We really want to know why something happened. So we question, not about what we already know, but about what we don’t know.

Why did you do that? What were you doing when you did that? What did it feel like the moment you chose “X?”

The community knows much more than any marketer. I think that’s why we have had 30 percent growth in our BizSpark program in just ten months. People come to the BizSpark program because someone is telling stories about how to get something done.

We are a community of makers. We solve problems. In our social communities, we are mirroring and modeling the very same “discovery process” that Steve Blank famously discusses in his book about being a startup. A startup is an idea, and ideas are made by people. Our community is an exploration of an idea in search of a business model.

To extend the metaphor, we are people in search of a people model. A lot of purchase decisions depend on the feeling that you have all your needs already taken care of, but that this new thing, this thing you don’t have yet, will make your life so much better — how could you want anything else?

For entrepreneurs and developers, it is different. They are thinking of other people’s problems. They are solving for humanity. When you offer people the chance to tell others what they know, so that others can be helped, then you are doing something that no marketing can trump.

You are building a culture.

Douglas Crets manages the social media strategy for a Microsoft division that works exclusively with startups. He works with internal partners in product groups like Windows 8, Windows Azure, Windows Phone and others to create  an integrated marketing channel from startups to Microsoft and back.  His work entails curating great content, showcasing the work of startups, and managing the way developer evangelists in Microsoft use social media to engage with their audiences. Follow Doug on Twitter @DouglasCrets.