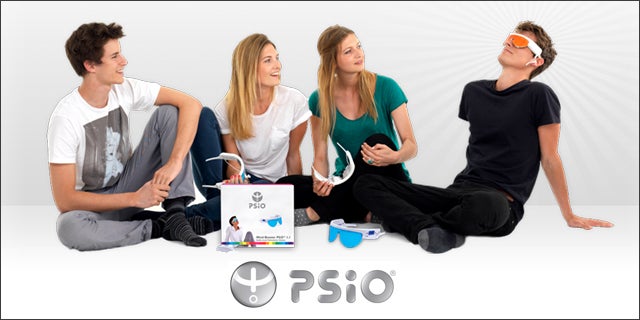 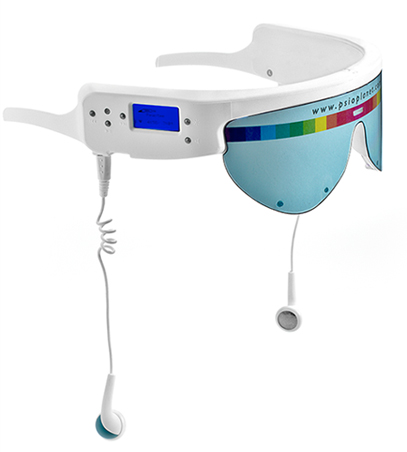 The first time you put on PSiO goggles, place the earbuds onto your ears, and turn them on, you might have the urge to yelp in surprise. Blue, red, and green colors start flashing like you’re in a disco. You see patterns moving across the screen such as a swirling vortex, illusions created by a brain trying to process colors that are moving too fast. In your ears, upbeat music transitions into a series of rhythmic beats that continue on and on and on until the screen goes black, 30 or 40 minutes later, and you come back to reality.

The PSiO is a mind-stimulation device coming out of Belgium that uses light and sound to affect your state of consciousness. For $399, it comes pre-loaded with 10-12 programs that can increase your creativity, boost your energy, or guide you through meditation. In fact, many of the PSiO’s effects are similar to those of meditation.

The first program I tried was Relax 2.0. I was far from relaxed – I didn’t know what to expect, and the instructions warn that people who are subject to seizures shouldn’t use PSiO (I’m not, but I was nervous anyway). When I put it on, I was greeted by flashing lights and colors and surprisingly non-relaxing-sounding music. My eyes watered a little from the intense lights, and a few muscles twitched; I wondered if that was the relaxation starting. After maybe 10 minutes – you can never tell with the PSiO – the music gave way to drum beats and a variety of mostly blue lights.

“To me, this is life-changing,” says Kelsey Butler, CNHP, VBP, who claims she hasn’t needed a cup of coffee since she started using the PSiO. (Her three-year-old daughter also uses PSiO – the only time of day she’ll sit still.) “I can’t see anybody that can’t benefit from it.”

The other programs I tried – Energy Source and Sleep – seemed surprisingly similar. Energy Source, a 16-minute program that’s supposed to be like taking a power nap, was lots of green and red lights. It’s a particularly good choice for sleep-deprived entrepreneurs. The first time I tried it, it didn’t seem to do much. But about 10 minutes after I tried it the second time, I felt the oddest sensation of my brain waking up – as if someone cranked up the focus switch in my head. Another night, when I felt too awake around bedtime, I did the 30-minute Sleep program and fell asleep halfway through.

For $20 each, you can buy dozens of other programs that help you do things like quit smoking, develop your confidence, or memorize things.

Founding owner Stephane Krsmanovic first began experimenting with audiovisual stimulation during his PhD at the Free University of Brussels. He soon discovered that hyperstimulating the brain can have effects on memory, creativity, learning, and concentration. That research led to devices like the Dreamer and the Mind Booster and now the PSiO.

Of course, he’s not the first to study audiovisual stimulation. A study at Pepperdine University, for example, found that subjects could learn 1,800 Bulgarian words in 120 hours with its help. Audiovisual stimulation has been used to help insomniacs and chronic pain sufferers, relax patients during medical procedures, relieve stress and post-traumatic stress disorder, and cure headaches. Scientists have discovered that slower stimulation frequencies bring our brains to a sleep state, slightly faster frequencies relax us, and fast frequencies stimulate our creativity.

What’s poetic about this whole story is that the technologies behind the PSiO – such a futuristic device that made my roommate ogle and giggle – began to be discovered centuries ago. Around the year 150, Ptolemy found that people experienced euphoria when they looked at the flickering lights caused by placing a spinning spoked wheel in front of the sun. Shamans and medicine men have long incorporated rhythmic, monotonous drum beats into their rituals. In the PSiO, the mystical becomes the scientific. We can press pause on reality and be transported to a state of consciousness sought by many, and – in our era of a different kind of overstimulation – obtained by few.