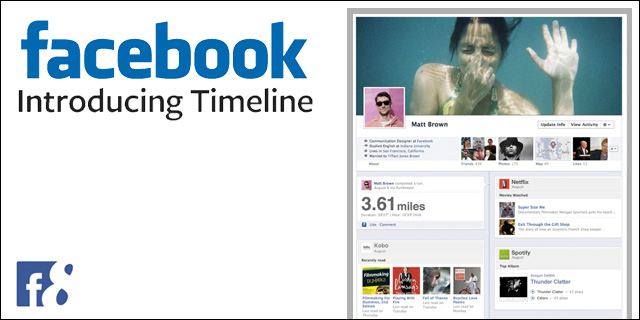 Following recent updates to photos and a mysterious new stream, Facebook is launching more changes in structure and design in the coming weeks, which were announced at the f8 Developers Conference. Here they are:

What it is: A new profile page with your most important updates (see pictures here)

How it works: Facebook automatically inputs some content, like “photos and major life events.” You can choose to add other items, which are listed in a new private activity log of everything you’ve shared. Once they appear in your timeline, you can make them widescreen or hide them. “With timeline, now you have a home for all the great stories you've already shared. They don't just vanish as you add new stuff,” explains Facebook product manager Samuel W. Lessin.

How it looks: Your profile page starts with a widescreen photo at the top, called your “cover” (think: album cover). Below, content spans wider and differs in size.

How it works: You can add apps to your timeline to display updates there, but app activity automatically goes into your ticker (see below). Apps let you keep track of similar actions, like reading books, without having to “like” all of them. Apps also aggregate content into reports, like Netflix movies you watched in September. Actions performed with others will show up on your connections page, and app developers get new analytics.

What it is: A stream of less important content, located on the right side above friends who are online.

How it works: It aggregates friends’ activity.

How it looks: As it does now (just launched).

Facebook is also emphasizing “real-time serendipity”: with actions posted on social apps, friends can join you instantaneously in listening to music, cooking, you name it. This also means lots more meaningful data – for you, app developers, and Facebook.

These updates are garnering the usual slew of comments – protests against change and cheers of support – but this time may be different. From what I can tell, the new profile has a bit of a learning curve for users, who now have to figure out what to include in their timeline, what apps to use, and where the heck everything is. I still think it’s a visually beautiful and positive change, but Facebook’s hundreds of millions of other users may not agree.