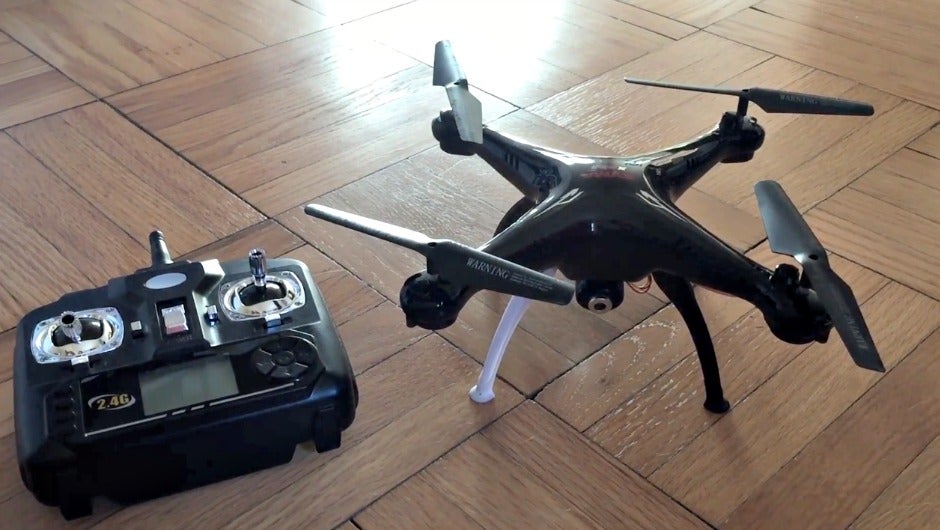 Post-CES there are a lot of new gadgets about to enter our life, but thanks to this holiday season we are just now seeing a huge growth in quadcopter and drone ownership. With price points all over the board, it makes sense to start on the affordable side of things to gain an understanding of how they fly, their capabilities, and if it’s worth a couple of car payments for the real deal later on.

The Syma X5 SC-1 is an excellent entry level quadcopter to get you started, featuring HD video, Headless mode, and can easily take a beating.

For a quadcopter under $50, the Syma X5 SC-1 is filled with a lot of great functionality and add-ons. For starters, this model is especially great for first-time flyers primarily due to the “Headless” mode. Headless mode allows you to face a direction, signal to the drone which direction should be North and South, and you then have simplified controls. In regular flight mode you have more fine tuning, but as it gets further away it can be confusing which is the front and back of the drone.

Another neat little feature is the easy-to-use stunt button. You can do 360-degree front or backward flips, and also do barrel rolls by pressing in a direction and hitting the top right button on the controller.

The battery that comes with the quadcopter only holds about 6-8 minutes of flight time, and that is also based on if you have the landing gear, blade protectors, and are recording video. Without those, it’ll run a bit longer. Luckily you can find some super cheap batteries that are compatible, and it’s to swap them in and out.

I’m not overall thrilled with the quality of the camera, but at the price point it’s about the cheapest quadcopter that has one, at least that I’d spend money on. The frame rate is pretty low and the clarity is not that great, so don’t expect any awards from the resulting product. You can get a better idea of the visuals outcome in the video review.

There are really only two flaws in this quadcopter, and one could potentially be affecting the other.

For starters, the Syma X5 SC-1 may have a 6-axis stabilization system, but this poor thing has got the wobbles. Regardless of flight mode or a lack of wind, it’s a bit of a challenge to get the drone to fully stabilize. The best way to explain this is if your car alignment was off and you put cruise control on without touching the steering wheel (which you wouldn’t). Say you wanted to get a continuous shot with the video camera and you set the speed, which in turn would keep the height steady. Even after adjusting the trim on each blade, you constantly have to battle with the speed to keep the drone steady, which in turn causes quite a bit of wobble.

Second, because the camera and video button are tied on the controller to what appears to be the place to adjust one of the blades trim, that particular one can’t be adjusted. At the very least the instructions are not clear in explaining how to switch the button mapping, so one blade can’t be adjusted.

Both of these combined create a bit of an issue with capturing video. Because there is no stabilizer on the camera, the best way to capture video is through smooth, continuous motion as to not create a wobbling effect.

The Syma X5 SC-1 has your typical entry-level quadcopter design. It looks bad ass, and has optional landing legs and blade protectors. Although some other drones also have LEDs, there are two color sets on this to help the pilot differentiate the front from the back. The front-facing camera is also stationary and positioned downward, so it takes a little practice to get an idea of where its capture area is.

Overall, it’s incredibly durable. I’ve run this poor thing into metal doors, walls, ceilings, dropped it from whatever it’s height ceiling is, and ran some base on a baseball diamond causing it to fill with sand. It still works like a charm.

Even if you do lose or break a piece of the drone off, almost every component can easily be replaced and the parts are cheap. The only part that would not be worth a repair in the body itself. However, even after hitting the maximum height and ceremoniously allowing it to plummet to the earth, the only resulting damage was a landing leg and some slight separation at the seam, but that popped back together.

If you are just getting into flying quadcopters, the Syma X5 SC-1 is the perfect drone for the job. Although the flight time is brief, batteries are cheap and replaceable. The camera isn’t the best in the world, but it’s still neat to have some basic capturing available. Overall the price is incredibly affordable and the quadcopter is super fun to fly. I’d absolutely recommend buying this if you are interested in getting into the more expensive hobby side of drones and quadcopters. You can find this model on a few sites such as Gearbest and Amazon.

Would recommend to buy: 4 out 5