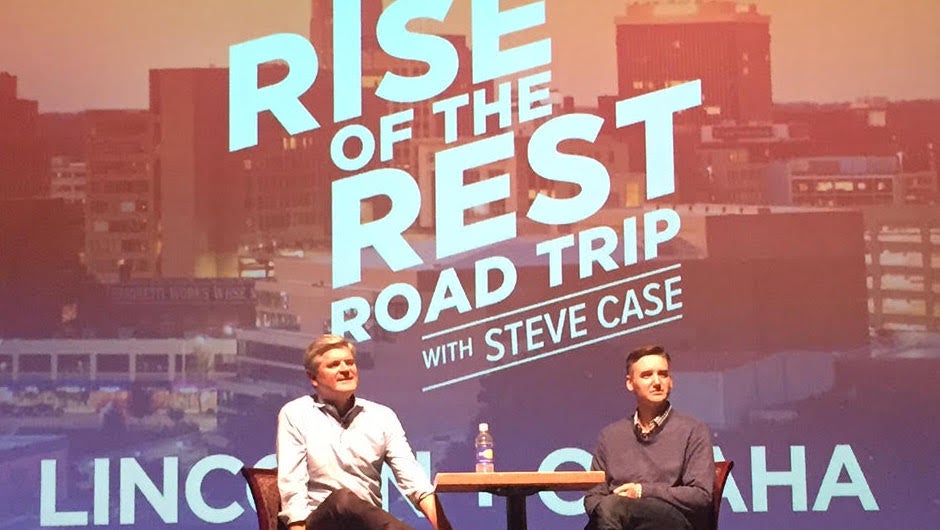 On Monday, we kicked off the Rise of the Rest tour in Omaha and Lincoln, Nebraska. We met with a lot of key people, from local representatives and state government officials to investors and startup founders during our whirlwind day.

While in town, I got a chance to catch up with Jeff Slobotski from Router Ventures and the founder of Big Omaha, an event that put the area on the map to the startup community over the past seven years. You can watch my interview with Jeff Slobotski below:

If you have a chance to get on the ground in Nebraska, you'll quickly realize that the region has a lot to offer startups. It has a lot of advantages that other startup ecosystems around the country can't offer. For an entrepreneur, it costs about a third to run a business in Nebraska than in San Francisco or New York. It has over 20 colleges and Universities including University of Nebraska which houses an Innovation Campus aimed at bridging the college and private sector business.

One company that has blossomed out of Innovation Campus is Spreetail, an e-commerce retail site that has generated over $138M in revenue. While touring Innovation Campus, I saw the company BugEater Foods where they are turning cricket powder into a source of protein. Their product name is cleverly named “Jump.”

With five Fortune 500 companies based in Omaha, the name Warren Buffet is certainly a household name along with other large companies PayPal and LinkedIn. For those that don't know, healthcare and education are Omaha’s largest economic sectors. In Lincoln, most economic activity is derived from the service and manufacturing industries.

With these giants around the corner, you'd think capital would be no problem. Unfortunately, that has not been the case until recently. The Lincoln and Omaha region saw zero venture deals in 2011. Yes, zero. However, in 2015 there were 13 deals worth close to $120 million. The Nebraska state government also offers incentive programs to encourage innovation in the state, including grant programs, matching state support for federal SBIR grants, a seed/commercialization program, and an angel investment tax credit.

Turing back to the community, the NMotion startup accelerator is helping spin out fresh startups left and right, and they might have something to do with a consistent flow of new emerging companies. One of the startups on the rise is Hudl, a tool for coaches and athletes to review game footage and improve team play. The company has raised over $70 million in funding and considered a touchdown win for Nebraska.

Shifting over to the talks of the day, I sat down with Steve Case for a fireside chat and delved deeper into the Nebraska startup ecosystem, entrepreneurship, innovation, and the future of America. Watch the two part video series below:

After the fireside chat, eight startups pitched for a chance at $100,000 investment from Revolution and they all brought their A-game. I saw a full spectrum of startups, everything from a Fitbit for cows to virtual reality.

In the end, LifeLoop, a lifestyle management and resident engagement application for senior living communities that connects families, residents and staff, took home the big check. Congratulations! The next stops on the Rise of the Rest tour include Denver, Salt Lake City, Albuquerque, and Phoenix.